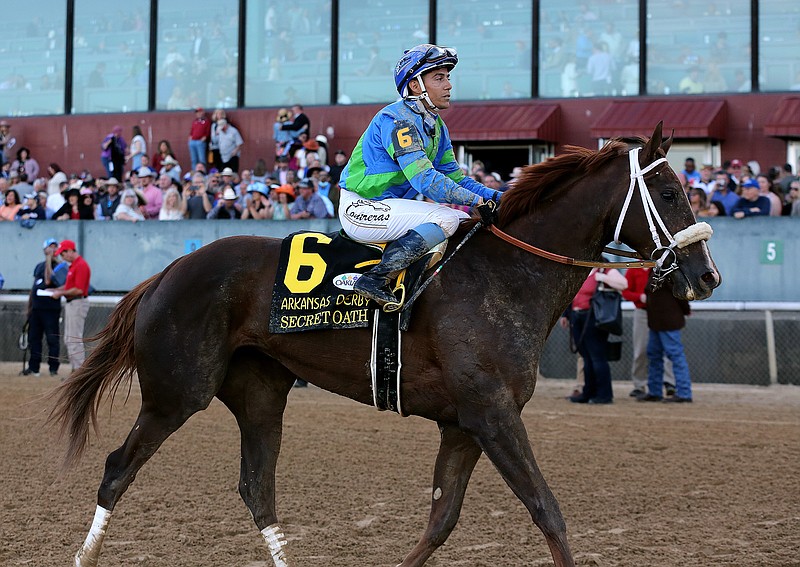 HOT SPRINGS -- There is no clearer nor more meaningful signal to the end of a meet at Oaklawn Racing Casino Resort than the running of the Trail's End, a nearly two-lap race of one mile and three-quarters.

The $125,000 Trail's End on Sunday was for horses three years old and up that have run for a claiming price of $10,000 or less at least once since the start of last year, a working-class bunch who form racing's and Oaklawn's backbone. Ten Strike Racing's Original Intent won the 2021-22 Trail's End in 2:59.98 before an estimated Oaklawn crowd of 2,500.

"He won last year and today he did it again, and I'm glad I had a chance to ride him," Garcia said.

The 2021-22 season is complete. It lasted a few days over five months, the longest schedule since the track opened in 1904, and included a record 66 racing days.

The Trail's End remained the same. It has long featured a pause in the post parade as horses and their riders turn to the grandstand to take figurative bows to the fans and others who make their efforts possible.

"I love it," said jockey Kelsi Harr, a native Arkansan. "It is a bow to the fans. If nobody comes and nobody wants to bet horse racing, we can't do what we do. They definitely make the game, but it's for everybody, not just the fans. It's for everyone who works at the track seven days a week and puts in all the hours we do."

Financial measurement's made the 2021-22 season at Oaklawn among its most successful.

"Twenty years ago, in January of 2000 when we started Instant Racing, our average daily purse distribution was around 140 some odd thousand dollars, " Oaklawn President Louis Cella said. "Go forward twenty years, and we're pushing 50 million [for the season]. That comes out to over 700,000 a day. That's what our average is, over 700,000 versus 140,000. No other track has done that."

Oaklawn's coming 2022-23 season will last slightly less than five months but include 68 racing days. Racing will begin on Friday, Dec. 9, and conclude on Saturday, May 6, 2023, the scheduled date for the 149th Kentucky Derby. A return to four-day racing weeks will highlight the month of March when races on Thursdays make a comeback.

"We're opening in the second week of December, then we're going to have just weekend racing again, but we're picking up Thursdays in March," Cella said. "We're excited and the horsemen are excited."

Harr said race meets at Oaklawn cannot last too long for her.

"We wish we could stay here year-round," she said.

Among the champions for Oaklawn's 2021-22 season is jockey David Cabrera, who was lost for the meet after a fall at Oaklawn on April 8. Cabrera won the Oaklawn riding title with 62 wins. He injured his back, head, and cheek after his horse clipped heels with another and fell. He has not ridden since. Francisco Arrieta finished second with 61.

Ricardo Santana, Jr., Oaklawn's riding champion for eight of the last nine seasons, was third with 58 but earned a track-leading purse total of $4,059,003.

Steve Asmussen, a member of the National Museum of Racing and Hall of Fame, was Oaklawn's champion trainer for the 12th time since 2007. Asmussen trained 65 winners for a track-leading purse total of $4,893,450. Robertino Diodoro, Oaklawn's 2020 champion, trained 42 winners to finish second.

John Ed Anthony of Hot Springs led Oaklawn's owners with 19 wins and a record purse total of $2,083,402. The Mary Rose, a homebred for Anthony's Shortleaf Stable, won the $150,000 1-mile Natural State Stakes for fillies and mares to make Anthony Oaklawn's first owner to surpass $2 million in purse earnings for a season. Anthony's 272 career wins are also an Oaklawn record. He broke a tie with Sharon Hild at 269 on Feb. 26.

John Ortiz trained 14 of Shortleaf Stable's winners in 2021-22. The 2020 and 2021 Eclipse Award trainer of the year Brad Cox conditioned the other five.

"We've had a couple of really crackerjack trainers that are on top of their game and focused on the horses and on horse racing," Anthony, 83, said in the Larry Snyder Winner's Circle moments after the Natural State Breeders' Stakes on Friday. "Whenever you give them a little ammunition, they'll take it and run with it, and so Brad and Johnny have both done a super job for us."

Two horses tied for races won at Oaklawn in 2021-22 with four, led in purse earnings by Arkansas-bred sensation Gar Hole, a four-year-old son of Tekton owned by Anthony and trained by Ortiz. Gar Hole compiled an Oaklawn record of 5 4-0-1, with purse earnings of $283,640. He won the 6-furlong Nodouble Breeders' Stakes for Arkansas-bred horses in 1:09.06 on March 5.

Darrin Dares' Devil's Tower, a four-year-old son of Into Mischief trained by Chris Hartman, also won four races as he compiled an Oaklawn record of 6 4-0-0. Devils Tower had purse earnings of $140,040.

"Devil's Tower had a great year, especially for [Dares], because he really doesn't have that many horses," Hartman said. "It was very nice for him, and it was a surprise for the horse. We thought he'd do well, but to win four races is great."

Oaklawn's traditional season wrap came as Garcia guided the Trail's End winner under the wire on an unseasonably warm afternoon. The temperature in Hot Springs was 84 degrees as Garcia dismounted Original Intent in the winner's circle, walked to the scales, and then through the paddock toward the jockey's dressing room and a season-ending shower. He paused for a moment before he turned up a flight of stairs for a final climb to his locker.

"This means a lot," Garcia said. "It's the race to close the meet, and it's a mile and six furlongs, and that's such a long distance."