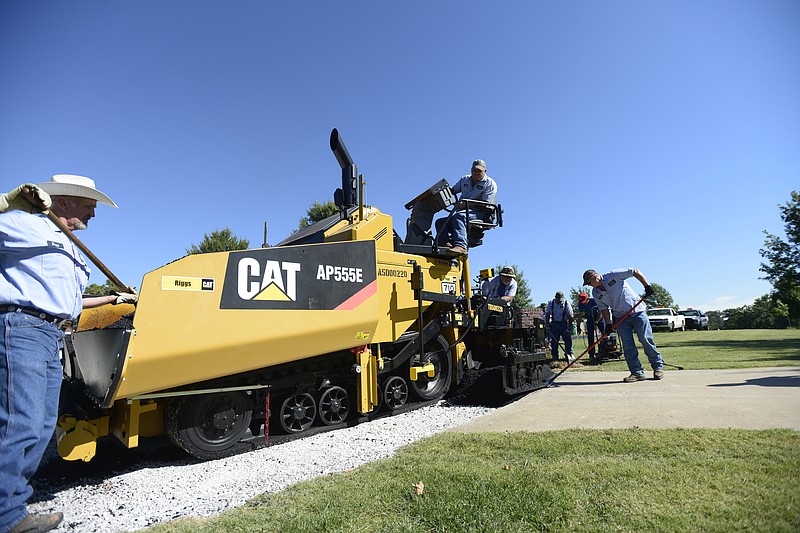 SPRINGDALE -- The city is preparing to start its annual program to repave some city streets.

James Smith, director of the Public Works department, said city officials will consider bids from contractors for the project in late May.

The city expects to spend $1 million for the work this year, the same amount it budgeted for the previous two years, Smith said.

This will be the second year of a five-year plan with 2022 focusing on streets in the south-central part of town, including work on Shady Grove Road; Main, Powell, Turner and Pleasant streets; and Robinson Avenue, Smith said.

Overlays last year were in the downtown area.

Smith noted Randall-Wobbe Lane west of the Arkansas & Missouri Railroad tracks, Shipley Street behind the 10-Box grocery store and sections of Porter and Sunset avenues need repaving. These places will be fixed this year.

The work depends on the weather, Smith said.

"It's got to be 45 and rising when they lay the hot asphalt," he said. "If it cools before it is laid down and rolled, the asphalt just crumbles."

Residents will receive door hangar notices before a street is repaved, so they can arrange to park somewhere other than in the streets, Smith noted.

The city in 2020 completed a survey of the conditions of all its streets and is focusing on the streets in the worst condition, explained Ryan Carr, deputy director of the city's Engineering Department.

Keeping the work within zones or regions of the city saves money, Smith said. A contractor will charge a mobilization fee every time it must pick up and move its equipment. Keeping distances between projects shorter reduces those mobilization fees, he explained.

The Arkansas Department of Transportation is responsible for repaving Thompson Street, which also holds the designation of U.S. 71 Business, Smith said.

The department is in the very early stages of planning a complete milling and repaving project of U.S. 71 Business over nearly 20 miles in Benton and Washington counties, said Dave Parker, a Transportation Department spokesman. The project has not received funding from the Arkansas Highway Commission, he said.

Smith said city crews in advance of the chosen contractor repair all old cuts made by the city or Springdale Water Utilities to a street's surface over time. City crews will pull out temporary patches and make them more permanent.

Crews also will cut out and rebuild places where the street is failing, he said.

Age, heavy traffic, heavy trucks and weather can damage a street, he said.

Water flows through the cracks in a street and weakens the gravel base layer and the ground, called the sub-grade, Carr said. The result is "alligator cracking" when the asphalt resembles the scales of an alligator, he said.

Alligator cracking in the asphalt is a sign the street is failing, he said.

New asphalt will crumble again if not repaired below, Smith said.

Some of the failing streets were built before they were annexed into the city. The streets weren't expected to meet code, so some people just laid the asphalt over the dirt, Smith said.

Even failing streets are safe to drive, but "they'll just be bumpy," Smith said.

The project also will mill down "crowns" in a street of 3 feet or higher.

All streets are sloped down from the middle of the street to the outer edges to ensure runoff of water, Smith explained.

The typical repaving program mills up the side of a street where it butts against a gutter, to keep the two surfaces level. But if a crown reaches more than 3 feet tall at the center, the street and gutters won't match, and cars might slide off the street, he said.