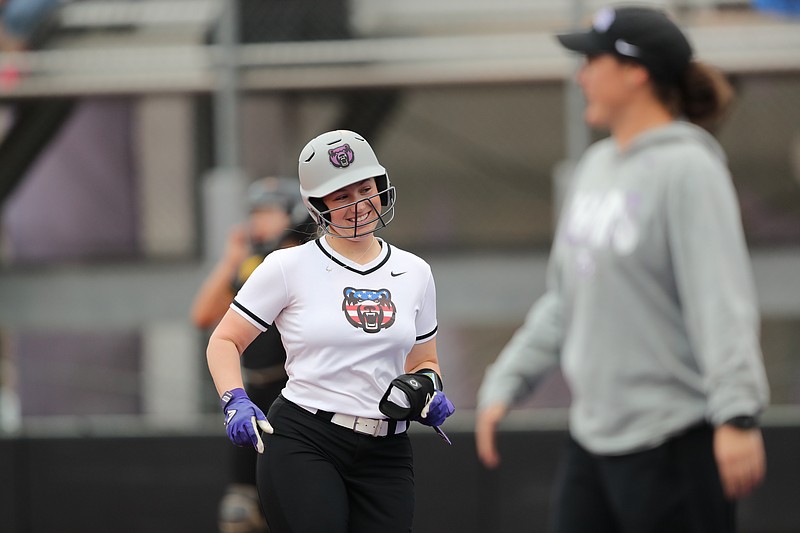 Atkins native Mary Kate Brown was named first-team All-ASUN after starting all 51 games for the Bears and leading the conference with 51 RBI.

CONWAY -- The return trip from North Florida in early April was a little less painful, if only because the University of Central Arkansas softball team wasn't riding 13-plus hours on a bus.

The Bears instead hopped onto a flight in Jacksonville, Fla., connecting en route to Little Rock before making the short drive back to their Conway campus.

But there was still plenty of time to stew over a series sweep at the hands of the Ospreys, three losses in which UCA was twice shut out and scored two runs in the other.

One weekend wasn't going to derail UCA's season. The Bears made it a turning point.

UCA will get an opportunity to vindicate itself this week as the Bears return to North Florida's Softball Complex as winners of 13 of their past 15 league games and the No. 2 seed in this week's ASUN Conference Tournament.

In its first ASUN season after a decade-plus in the Southland Conference, UCA is set to begin its road to a second NCAA Tournament bid in program history at 9 a.m. Thursday against the winner of today's game between third-seeded North Florida and No. 6 seed Kennesaw State.

"It was a humbling moment for us," UCA's first-team All-ASUN second baseman Mary Kate Brown said of the sweep. "We were getting really confident, which is a great thing. But it's also good to take a step back. ... Sometimes, you have to have those moments in a season to really show you what you need to work on."

Coach Jenny Parsons said she had confidence in her team long before April. After spending 10 years as the Bears' pitching coach under previous coach David Kuhn, Parsons was named the head coach last June when Kuhn resigned.

Upon her promotion, Parsons told the Arkansas Democrat-Gazette that UCA was "on the doorstep of being a team that competes for championships."

It wasn't necessarily a bold statement. The Bears won 37 games a year ago, finishing second in the Southland, and prior to a covid-shortened 2020, they'd put together 10 straight seasons of 25-plus wins.

It was, however, a prophetic call.

"We recruited a lot of really good players. They've been young and they're just maturing," Parsons said. "They've changed the culture a little bit and they're just talented. They're having fun and they want to win games."

Winning has happened in bunches over the past five weeks. UCA went 14-4 during that stretch, taking each of its last five ASUN series and nearly pulling off a stunner during a midweek matchup in Fayetteville, losing 3-2 at No. 4 Arkansas.

The Bears were the beneficiaries of four All-ASUN honorees on offense, including Brown and Conway native Tremere Harris, who posted a .401 batting average -- second-best in the league.

The Johnson-Beaver tandem often took the pressure off an offense that, while potent, averaged fewer than five runs per game.

They were all there last season.

What changed was the voice at the top.

Parsons had been a head coach before. After starting as an assistant at her alma mater, East Carolina, Parsons spent 10 seasons at Nicholls State -- the final eight in charge of the Colonels.

She said she wanted even more success this time around.

"I'm a better coach," Parsons said when asked if this season felt different. "When I was a coach before, I spent a lot of time trying to make sure everybody was happy. My players understand their roles. They may not like all their roles all the time, but they accept them ... and we just have a lot of love."

Dogs in the dugout

UCA didn't get to display its lighthearted approach during a sweep of Jacksonville State to conclude the regular season. Much of that was because of an increased focus -- the Bears knew going into the weekend that two wins would secure an ASUN West Division title and a third would clinch a No. 2 seed and first-round bye in the conference tournament.

But those at Farris Field could still hear barking coming from UCA's dugout. And no, a couple of canines hadn't sneaked in.

"These girls in here are crazy," said Brown, who played in high school at Atkins. "I don't even know what goes on half the time, but the energy that the dugout has, that carries us.

Kicking back on the Florida beaches won't be on the agenda the next few days.

Despite the Bears' success under Kuhn, they only reached the NCAA Tournament in 2015, losing twice in as many days to swiftly end their season.

To get back to that stage, UCA will almost certainly have to cross paths with top-seeded Liberty -- currently No. 31 in the RPI -- at least once during this week's double-elimination tournament.

The Bears have yet to meet the Flames, who lost only once in 24 league games this season.

"They understand that they are capable of beating anybody at any time," Parsons said. "We've got to win every game, starting with the first game, and if we do that, we'll be happy at the end."