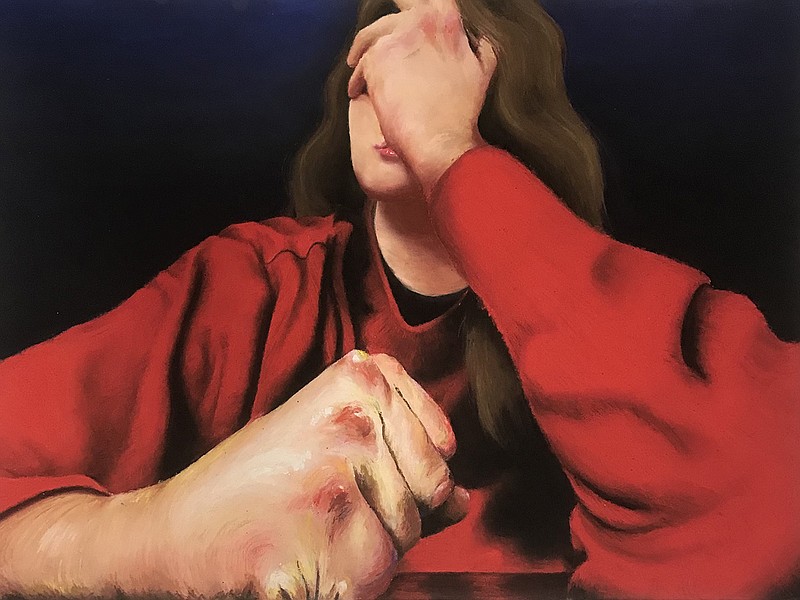 Rachel Howald, a senior at Mountain Home High School, won the 2022 Congressional Art Competition for the 1st district with her piece titled “Anxious.” More photos at arkansasonline.com/512art/. (Special to the Arkansas Democrat-Gazette)

WASHINGTON -- Four Arkansas students have been named winners of the 2022 Congressional Art Competition in their respective districts, earning a spot for their artwork to be seen by U.S. Capitol visitors.

The winners will have their artwork hung on a wall in a prominent underground hallway connecting the U.S. Capitol and the Cannon House Office Building in Washington, D.C., according to congressional offices.

Palucis' winning piece is titled "Genuine," and portrays the face of a person smiling.

"I was thoroughly impressed with the remarkable talent of our Fourth District students and their dedication to honing their creative skills," Westerman said in a statement. "All the applicants should be very proud of their accomplishments."

Started in 1982, the competition is based in congressional districts and is open to students across the country, according to the Congressional Research Service.

Shannon Smith, a senior at Flippin High School in northern Arkansas, was selected as the winner of the art competition in Arkansas' 3rd Congressional District. The winning artwork is titled "Portrait of Many Colors."

"Shannon's composition and technique caught the eyes of the judges, and I congratulate her on the great achievement," said U.S. Rep. Steve Womack in a statement.

The competition involved dozens of pieces of art from high schools throughout Womack's district, according to his office. A panel of local judges reviewed the artwork, including officials with Crystal Bridges Museum of American Art, according to Womack's office.

"I'm proud of the strong participation from the Third District," Womack said in the statement. "The submissions demonstrated the talent and creativity of young Arkansas artists."

In the state's 2nd Congressional District, Josie Atkinson, an 11th grade student at Greenbrier High School, was named the winner with her artwork titled "Midnight – Up Close and Personal."

This year's competition included work provided by 60 students from central Arkansas, according to the office of U.S. Rep. French Hill.

"Every year, I am impressed with the exceptional work of our young artists, and I thank the leaders in our community, including our local art teachers, who encourage our students and give them the tools and resources to produce such outstanding art," Hill said in a statement.

The winning artwork from the 1st Congressional District was from Rachel Howald, a senior at Mountain Home High School. She won with her drawing titled "Anxious," which depicts a person covering their face with their hand.

"As always, the entries were outstanding, and I am proud to have so many talented students in the First Congressional District," said U.S. Rep. Rick Crawford in a statement on Tuesday.

The competition this year included almost 200 artwork submissions, according to Crawford's office.