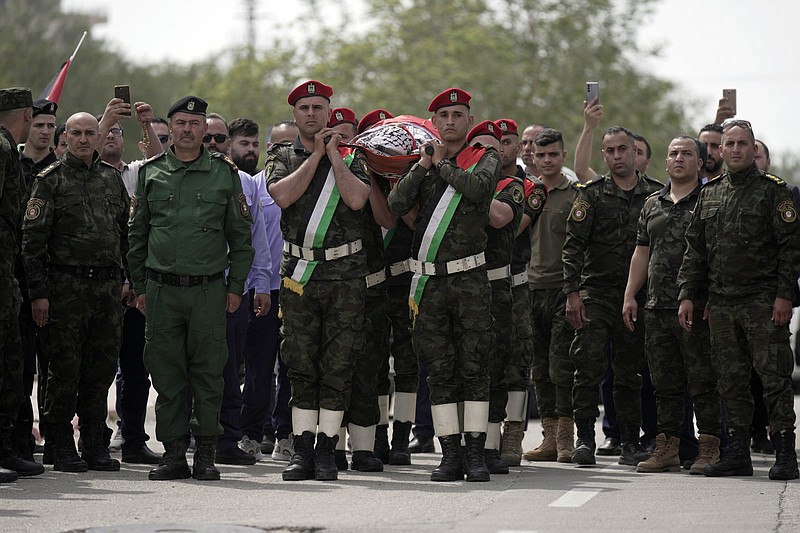 JERUSALEM -- Veteran Al Jazeera journalist Shireen Abu Akleh, a Palestinian American and one of the satellite channel's best-known reporters, was shot and killed on Wednesday while covering an Israeli military raid in the occupied West Bank. The broadcaster and two reporters who were with her blamed Israeli forces.

Israel's defense minister, Benny Gantz, promised a transparent investigation, and said he was in touch with U.S. and Palestinian officials. The Israeli military initially suggested that Abu Akleh might have been killed by stray fire from Palestinians, but Gantz was more cautious Wednesday evening. "We are trying to figure out exactly what happened," he said. "I don't have final conclusions."

He said Israel asked the Palestinian medical team that performed a preliminary autopsy to hand over the fatal bullet for further examination. The head of the Palestinian forensics institute, Rayan al-Ali, said earlier Wednesday that the bullet was deformed, and that he could not yet determine who fired it.

In Ramallah, the seat of the Palestinian autonomy government, Abu Akleh's body was carried through downtown streets. Hundreds chanted, "with our spirit, with our blood, we will redeem you, Shireen."

In east Jerusalem, dozens of mourners gathered at the family home to honor her.

At one point, a group of Israeli police entered the home, where they were immediately met with shouts of "killers" and "occupiers" and chants to "get out." It was not clear why the police came, and the officers quickly left.

Palestinians gathered outside the family's house on Wednesday evening. When the group walked toward a main thoroughfare, Israeli police tried to stop them. Scuffles ensured. Five Palestinians were hurt and about half a dozen were detained.

Abu Akleh, 51, was killed by a shot to the head while on the outskirts of the Jenin refugee camp in the northern West Bank, known as a bastion of militants.

Gantz said Israeli forces came under attack by indiscriminate fire by Palestinian militants from several directions. The army released a body cam video of forces in the town while heavy fire is heard in the background.

Gantz described the situation as chaotic. He said the soldiers at the scene had all been questioned, but that the investigation could only make progress with the cooperation of the Palestinian forensic team.

"I am very sorry for what happened," Gantz told reporters. "Currently we do not know what was the direct cause of Shireen's death. We are very decisive to have a full-scale investigation ... and we hope to get Palestinian cooperation on this issue."

Al Jazeera Arabic, the broadcaster which Abu Akleh reported for, accused Israel of "deliberately targeting and killing our colleague." Palestinian journalists who were with Abu Akleh at the time said they made their presence known to Israeli soldiers, and that they did not see militants in the area.

Abu Akleh's producer, Palestinian journalist Ali Samoudi, was hospitalized in stable condition after being shot in the back. He said any suggestion they were shot by militants was a "complete lie."

The outcome of Israel's military investigation will be closely watched. The International Criminal Court has opened an investigation into possible war crimes by Israel in both the occupied West Bank and the Gaza Strip.

Israel does not recognize the court's jurisdiction.

Hussein Al Sheikh, a top Palestinian official, said the Palestinians would transfer its information on the case to the court.

In New York, the U.S. ambassador to the United Nations, Linda Thomas-Greenfield, called Abu Akleh's death "really horrifying" and called for a transparent investigation. She said protecting American citizens and journalists was "our highest priority."

The U.N. Human Rights office urged for an "independent, transparent investigation into her killing. Impunity must end."

It aired a video showing Abu Akleh lying motionless on the side of a road wall as another journalist crouches nearby and a man screams for an ambulance. Gunfire rings out in the background. Both reporters were wearing blue flak jackets clearly marked with the word "PRESS." The video did not show the source of the gunfire.

Qatar, the Arab League and Jordan all condemned the shooting, and in the Jordanian capital of Amman, a group of journalists and activists held a solidarity march outside Al Jazeera's offices.