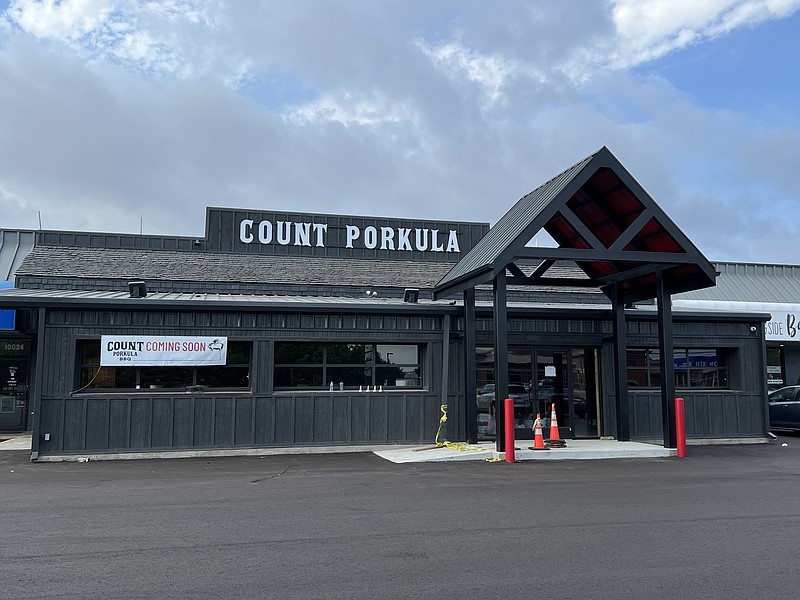 We reported a few months ago that Lea Lea's Gourmet Dogs would open a second location at 3400 S. University Ave., Little Rock, in a former hookah bar in the strip center a bit off the main drag. Now it turns out that owner Cherreyl Alexander has closed the original, at 215 Center St. downtown, and is moving, lock, stock and footlongs, to the new location, which should open next week. We're awaiting details on operating hours and the phone number.

The website for Count Porkula BBQ, countporkulabbq.com, shows a May 26 target to open for Count Porkula BBQ on the Blvd., 10840 Maumelle Blvd., North Little Rock, just shy of where North Little Rock meets Maumelle. You will recall it's a partnership between the barbecue operation's Walt Todd and Kelly Lovell and JTJ Restaurants, and is opening in a strip center that the Keet family (that's James, Tommy and Jake Keet) now owns. The space has housed several restaurants, most recently The Hangout Grill & Bar. We're awaiting details on operating hours and a phone number.

The construction process has involved building a smokehouse in the back with two smokers, one wood-fired with a 1,500-pound capacity, and one propane-fueled, and moving the front door from the side to the front. Monday saw the resurfacing of the parking lot (causing, by the way, next-door Morningside Bagels to at least temporarily lose its patio; bagel-shop owner Robin Edwards and shopping center owner Jim Keet promise it'll come back).

Lovell says the menu will offer everything you can get at Count Porkula's first fixed space, in The Rail Yard, 1212 E. Sixth St. in Little Rock's East Village (Todd and Lovell started out in 2008 as a food truck), with some additions; some lunch-only items downtown will be available all day, including the prime brisket burger. Hours will be 11 a.m.-9 p.m. Tuesday-Thursday and Sunday, 11 a.m.-10 p.m. Friday-Saturday. A phone number is pending.

Still in progress: what is now being called Count Porkula BBQ at the Crossroads, under construction at 201 Keightley Drive, Little Rock, which the website says will open this fall.

Fidel & Co Coffee Roasters, 500 Shall Ave., also in Little Rock's East Village, is adding a second location sometime this summer in partnership with Stoko, a pending co-working space at 610 President Clinton Ave. in Little Rock's River Market District. A post on the shop's Facebook page (facebook.com/fidelandco) explains: "While East Village will always be special to us as it represents our beginning, we are excited to venture into Downtown. For our second location, we will be partner with @stokowork — being nestled inside a co-working space is a unique opportunity to connect with our customers on a deeper level and to build long-lasting relationships." (501) 712-6891.

Is it possible that the late, much-lamented Cordell's Delicatessen, which closed in 2004, could reopen? We fielded a query from a reader and chased down postings on Yelp (yelp.com/biz/cordells-little-rock) and MenuPix (menupix.com/littlerock/restaurants/343715/Cordells-Delicatessen-Little-Rock-AR) listing a Cordell's at 5805 Kavanaugh Blvd. in Little Rock's Pulaski Heights, and a phone number, (501) 663-9956, though that did not actually take us anywhere. The big catch, however: That's the current address of Heights Taco & Tamale, and it's not very likely that establishment is either closing or moving.

This one crept in under our radar, but the new Little Rock outlet of popular Conway soul food restaurant YGFBFKitchen, 27 Rahling Circle, formerly Bone's Chophouse (which briefly changed its name to JB ChopHouse before it closed), is wrapping up a three-week soft opening this weekend, with a grand opening scheduled for Monday. The new place will operate with "our full schedule and NEW FULL MENU," according to the Facebook page (facebook.com/YourGirlfriendBestFriendKitchen), which also reports that that chef/co-owner MaryAnn Strange has temporarily closed the Conway original, at 800 Fourth Ave., to focus on the Little Rock opening, with plans to reopen in June. Strange opened YGFBF, which stands for "Your Girlfriend Best Friend," in 2017 as a food truck. Soft-opening operating hours are 11 a.m.-7 p.m. Monday-Saturday; after the grand opening, they'll be open seven days a week, with possibly later closing hours. (501) 448-2220; YGFBFKitchen.com.

We reported a couple of months ago that a Chipotle Mexican Grill was in the works for 3929 McCain Blvd., North Little Rock, along the street frontage of McCain Mall; now we've learned that the bank building at that address has been demolished to make way for it.

The Papa Murphy's Take 'N' Bake Pizza outlet at 9120 N. Rodney Parham Road, Little Rock, has shut down, according to a couple of readers, who report "closed" and "for sale" signs on the door; Google lists it as "permanently closed." The phone number, (501) 225-7272, has not yet been disconnected but returns no answer during business hours. The website, order.papamurphys.com, only lists Arkansas locations in Hot Springs, Fort Smith, Fayetteville and Rogers.

We also reported a few months ago that Kemuri sushi, seafood, robata, 2601 Kavanaugh Blvd., Little Rock, had taken over the former Kiyen's Seafood Steak and Sushi space, 17200 Chenal Parkway, Little Rock, with plans to open a second location there. A recent Facebook post (facebook.com/kemurirobata) confirms a west Little Rock location will open in early summer. "The new location will feature the same great Kemuri dining experience as Hillcrest but with a few new menu additions, specials and cocktails!" The principal reason for the post is to let potential employees know they're hiring; apply in person at the Hillcrest location, 2-5 p.m. Monday-Friday. New hires will start work there and "transition to West as soon as it opens."

An update on our report on pending Arkansas Whataburger outlets: "We can confirm a fall 2022 opening in Fort Smith, Ark.," says a spokeswoman for the chain. Still no word on a potential outlet in El Dorado.

Fayetteville's Walton Arts Center, 495 W. Dickson St., hosts its annual "Art of Wine Uncorked!," an evening of wine and food sampling, 7-11 p.m. July 22. A limited number of Early Bird tickets are available at a discounted price of $65; once those sell out, general admission tickets increase to $75. Reserve Room Tasting tickets, $150, include a dedicated entrance and access to the Reserve Room with premier wine selections and additional restaurant options. Call (479) 443-5600 or visit waltonartscenter.org/special-events/art-of-wine. You must be 21 or older to attend. Festival proceeds support the center and its education and outreach programs. Preceding the festival: the annual Winemaker's Dinner July 19, featuring a collaborative menu from chef Elliot Hunt of Atlas the Restaurant and Chef William Mauk of Ella's Table.

And the BITE NW Arkansas food festival, celebrating the region's top cuisines, restaurants and chefs, returns this summer and fall as a three-part event series in conjunction with the Walmart NW Arkansas Championship, with events at Frisco Plaza in Rogers on July 29, at the Jones Center in Springdale on Sept. 1 and concluding with the BITE Experience@the LPGA, part of the Ladies Professional Golf Association tournament at the Pinnacle Country Club in Rogers on Sept. 23-25. Tickets — $35 each for the July 29 and Sept. 1, offering food and drinks samples from more than 30 local restaurants and brands; $45 for the BITE Experience, which includes food and drink sampling and daily grounds access to the golf tournament — go on sale Monday. Visit BITENWA.com/tickets or nwachampionship.com/tickets.