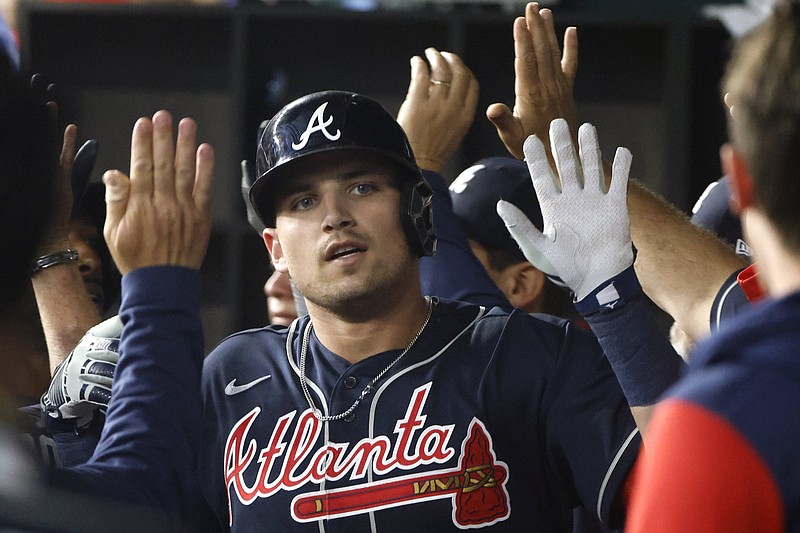 The Atlanta Braves beat third baseman Austin Riley and the St. Louis Cardinals defeated outfielder Tyler O'Neill on Wednesday in the first salary arbitration decisions this year. Riley was awarded $3.95 million rather than his $4.25 million request. Arbitrators Richard Bloch, Steven Wolf and John Woods heard the case virtually on Tuesday. O'Neill, a two-time Gold Glove winner, was awarded $3.4 million instead of his $4.15 million request. Mark Burstein, Brian Keller and John Stout heard the case Friday. Riley set career bests last season with a .303 average, 33 home runs and 107 RBI. He played in 160 games, tying Braves shortstop Dansby Swanson for the NL lead. Riley had a $590,500 salary last year and was eligible for arbitration for the first time. He is hitting .243 with 7 home runs and 14 RBI in 29 games this season. O'Neill set career bests last year with a .286 average, 34 home runs and 80 RBI, finishing eighth in NL MVP voting. He is hitting .213 with 2 home runs and 19 RBI this season.

Braves' Pina out for season

Atlanta Braves catcher Manny Pina will have season-ending surgery after tests revealed ligament and cartilage damage in his left wrist. Braves Manager Brian Snitker said before Wednesday night's game against the Boston Red Sox that the loss of Pina means William Contreras will continue to serve as the top backup to starter Travis d'Arnaud. Contreras, 24, began the season with Triple-A Gwinnett. Pina, 34, signed a two-year, $8 million deal with the Braves before the season. Pina was placed on the 10-day injury list on April 28 with left wrist inflammation. After he continued to have discomfort, an MRI revealed the more serious injury that will require surgery. Snitker said Pina is expected to be recovered in time for spring training next season. Pina spent the last six seasons with the Milwaukee Brewers after making his major league debut with Kansas City in 2011. He has a .243 career batting average.

San Diego Padres Manager Bob Melvin had prostate surgery Wednesday. The team announced Melvin's surgery during its 7-5 loss to the Chicago Cubs. It had no further details and said it likely won't have any updates until next week. Melvin said Tuesday that he didn't think he had cancer, but the doctors wouldn't know until the surgery. He said he hoped to miss only the first six games of the team's forthcoming nine-game road trip, which starts Friday night in Atlanta and continues through Philadelphia and San Francisco. Bench coach Ryan Christenson took over as interim manager on Tuesday night, when the Padres beat the Cubs 5-4.

The Cleveland Guardians are dealing with a covid-19 outbreak that has sidelined Manager Terry Francona and several of the team's coaches, leading to the postponement of Wednesday's game against the Chicago White Sox. Shortly after Francona's positive test became known, Major League Baseball said there were "multiple positive covid-19 tests" in Cleveland's organization and called off Wednesday's series finale to allow for more testing and contact tracing. No makeup date has been announced. It's the first coronavirus-related postponement since the season started on April 7. Guardians bench coach DeMarlo Hale, who was slotted to fill in for Francona, also tested positive, and Cleveland has "multiple coaches and other team support staff members" infected with the virus, according to team spokesman Bart Swain.

Chicago Cubs shortstop Nico Hoerner came out of Wednesday's series finale against the Padres with a sore right ankle an inning after colliding with second base umpire Dan Iassogna in center field. Hoerner was on the ground in pain after the collision in the first inning and was tended to by a trainer. He stayed in, batted in the second inning and struck out. Hoerner was replaced in the bottom half of the inning by Ildemaro Vargas. Hoerner was running out to take the throw from Jason Heyward after Jurickson Profar hit a flyball over the center fielder's head for a triple.

The jockey of Kentucky Derby upset winner Rich Strike is serving a four-day suspension handed down by Ohio racing stewards that his agent says won't prevent him from riding the horse in next week's Preakness. Stewards suspended Sonny Leon last week for careless riding during the third race on April 27 at Thistledown Racecourse, east of Cleveland, during which they determined he "deliberately and aggressively" steered One Glamorous Gal toward the rail to block other horses in the stretch. Leon interfered with jockey Alexander Chavez aboard Ultra Rays, the ruling stated, and One Glamorous Gal was disqualified from third place and finished in sixth. It is Leon's fifth suspension since last fall and includes a 15-day penalty in West Virginia for providing a false and altered document. Leon's original eight-day suspension in Ohio was reduced to four because he did not appeal; he began serving the penalty on Monday and it ends today.

The PGA Tour is returning to Colorado for the first time in a decade with the redesigned course at Castle Pines Golf Club serving as host to the 2024 BMW Championship. It's the first big-time professional golf tournament at the Jack Nicklaus-designed course 30 miles south of Denver since The International's 21-year run ended in 2006. Nicklaus said every hole has been modified over the last five years, highlighted by the addition of several lakes on the mountainside course carved through natural rock and Ponderosa pines that opened in 1981. The undulating layout that features narrow fairways and elevated multilayered greens plays over 8,000 yards with a par of 72.

Wake Forest has fired women's Coach Jen Hoover, parting ways with the former Demon Deacons player after 10 seasons. The school announced the move Wednesday evening, with Athletics Director John Currie pointing to the program's overall trajectory as well as turnover on the coaching staff. Wake Forest has made the NCAA Tournament just twice, though Hoover guided the Demon Deacons there in 2021. Hoover was an all-ACC performer as a Wake Forest player from 1987-91. This year's team went 16-17 and just 4-14 in league play. After the season, all three assistants departed, with associate head coach Erin Dickerson Davis becoming head coach at William & Mary.

Once is enough when it comes to beating Rafael Nadal on a clay court. Throughout his career, Nadal has never lost consecutive matches on his favorite surface and the Spaniard extended that perfect record on Wednesday by beating John Isner 6-3, 6-1 to reach the third round of the Italian Open. Nadal was coming off a loss to 19-year-old Carlos Alcaraz in the Madrid Open quarterfinals last week. After a first-round bye, he improved to 44-0 in matches on clay following a loss on the surface.