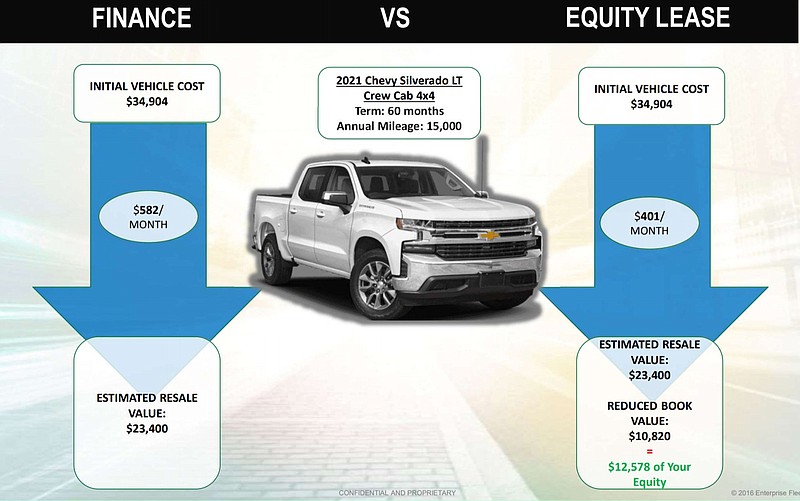 A resolution authorizing Mayor Shirley Washington to contract with Enterprise Fleet Management Trust to lease motor vehicles for the Pine Bluff Police Department was discussed Tuesday during the Public Safety Committee meeting, chaired by Glen Brown Jr. The resolution was sent to the full city council.

Thomas Layton, of the Enterprise Fleet Management division for Oklahoma and Arkansas, and Roman Aldaiz, an account executive with the company presented the committee with an analysis explaining the program and how it would benefit Pine Bluff. They shared that they were already in lease agreements with several Arkansas entities such as the cities of Bryant, Cabot, Rogers, Benton and Siloam Springs; the Little Rock School District and Police Department and Arkansas Children's Hospital.

"We had some really good conversations with the mayor and Chief (Lloyd) Franklin," said Aldaiz. "I think this program will bring a lot of great value to you guys."

Franklin has expressed in the past the desire to secure new police units to replace the outdated ones. Noting a patrol unit averages about 18,000 miles a year, the Enterprise program presented what the replacement program, over a 10-year span, would look like.

"We've had many visits with Enterprise and we've worked up an agreement at this point and time that we think it's worth us looking at and maybe something we can truly move forward with," said Washington. "We're checking all of our pockets, line items and making sure this proposal is something that is going to work into our budget. It looks pretty good right now."

Cynthia Anderson, chief of staff for the mayor's office, added Pine Bluff officials had reached out to the cities already using this program. Officials from those cities provided nothing but positive feedback.

"We've really been able to drive home great saving opportunities for these cities as well as just showing them a different philosophy of running a fleet of vehicles," said Aldaiz.

"They are finding a lot of value of us helping them utilize their greatest opportunity, which is their purchasing power."

According to Aldaiz, Enterprise is the largest owner and operator of vehicles in the world.

During his presentation, he said he tries to break down the total cost of ownership of the vehicle.

"With most cities that we meet with, their major concern is how much is that vehicle costing me on the front end," he said,

Aldaiz said the exact cost is broken down into three major buckets -- depreciation, maintenance and repairs and fuel.

"The reason these are important is if we can get a good buy upfront and we can reduce these other two buckets, which are the largest expenses in owning a vehicle, we can really start to move the needle and help the city do more with less in the fleet budget," said Aldaiz.

Looking at when is the right time to replace a vehicle, Aldaiz complimented the city of Pine Bluff saying they really did a great job of refreshing their fleet.

"What most cities do, they buy their vehicles and their thought is let's hold it as long as possible to make sure that we are getting every dollar out of that vehicle, but what they don't take into account is while we run this vehicle down into the ground this vehicle is going to depreciate consistently over time," he said. "We know as a vehicle gets old, it's going to experience more and more maintenance issues and more big ticket maintenance repairs that are going to start to significantly cost more as the vehicle ages and gets higher mileage."

Aldaiz explained as a vehicle starts to get older there is fuel degradation which causes it to be less efficient. You also miss out on upgrades and technology with an older vehicle.

"We look at an optimal time to replace the vehicle where we can get out of it while it's still worth a heck of a lot of money and be able to utilize that and put it into the next vehicle and then continue the process until this is a sustainable fleet management program," said Aldaiz.

Comparing financing a vehicle to leasing, the city of Pine Bluff would receive equity through the leasing program by switching out their vehicles every four to five years.

According to the city of Pine Bluff analysis, the goal is to lease 88 vehicles over 10 years beginning with 51 in the first year. Roman said the city will be able to do more with less budget dollars replacing four to five vehicles for the same cash outlay of purchasing one vehicle outright.

The estimated fleet equity by 2026 would be a little over $700,000 according to the analysis presented by Enterprise.

"When we go to sell the used vehicles on the open market, the resale proceeds will come back to the city," said Thomas.