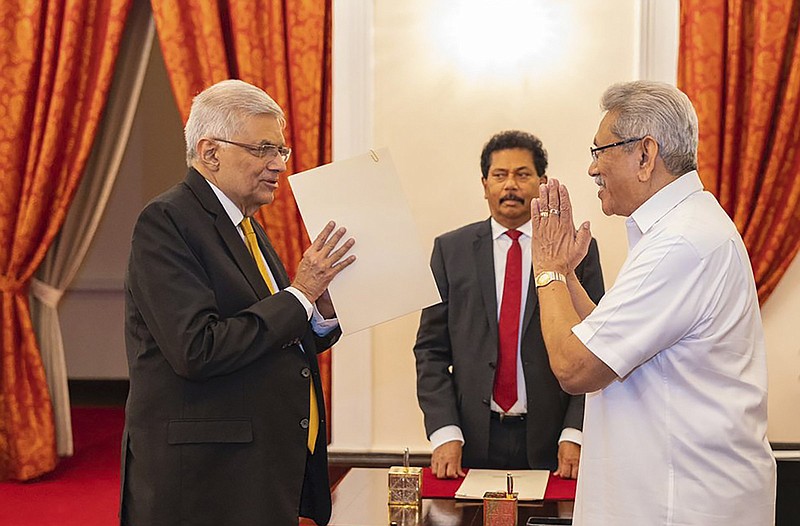 COLOMBO, Sri Lanka -- Five-time former Sri Lankan Prime Minister Ranil Wickremesinghe was reappointed on Thursday in an effort to end a political and economic crisis in the island nation.

Wickremesinghe, a contentious choice by President Gotabaya Rajapaksa, took his oath in a ceremony at the president's residence. Protesters have blocked the entrance to the president's office for more than a month.

The president's brother, Mahinda Rajapaksa, resigned as prime minister on Monday after violent attacks by supporters on peaceful anti-government protesters. His resignation automatically dissolved the Cabinet, leaving an administrative vacuum.

The president's selection of Wickremesinghe is an attempt to end the violence and restore international credibility as the government negotiates a bailout package with the International Monetary Fund.

Sri Lankans for months have been forced to stand in long lines to buy scarce essentials, with many returning empty-handed.

Wickremesinghe visited a Buddhist temple after taking his oath and told journalists he will work with the opposition and the governing party to find solutions to the hardships faced by the people.

Authorities on Wednesday deployed armored vehicles and troops in the streets of the capital after attacks on protesters triggered a wave of violence across the country. Nine people died and more than 200 were injured.

Security forces have been ordered to shoot people deemed to be participating in the violence as sporadic acts of arson and vandalism continued despite a strict nationwide curfew that began Monday evening.

A court on Thursday banned former prime minister Mahinda Rajapaksa, his former government minister son and 15 others from traveling overseas pending the results of investigations on Monday's attack against peaceful protesters who had demanded the resignation of the Rajapaksa brothers, which triggered the countrywide violence against Rajapaksa supporters.

Protesters had demanded the resignations of the Rajapaksa brothers because of the debt crisis that has nearly bankrupted the country and caused severe shortages of fuel, food and other essentials.

Opposition lawmaker Anura Dissananayake said the choice of Wickremesinghe was aimed more at protecting the president and his family from public anger over corruption allegations and his role in the economic crisis than it was in solving the country's problems.

When he was previously prime minister from 2015 to 2019, Wickremesinghe was accused of protecting the powerful Rajapaksa family from allegations of corruption and other wrongdoing.

The U.S. Ambassador to Sri Lanka, Julie Chung, said she looks forward to working with Wickremesinghe and that his appointment and "the quick formation of an inclusive government are first steps to addressing the crisis and promoting stability."

"We encourage meaningful progress at the IMF and long-term solutions that meet the needs of all Sri Lankans," she said in a tweet.

The finance ministry said earlier this month that the country's usable foreign reserves have plummeted to $25 million.