Images show Einstein right about size by Compiled by Democrat-Gazette Staff From Wire Reports | May 13, 2022 at 4:15 a.m. 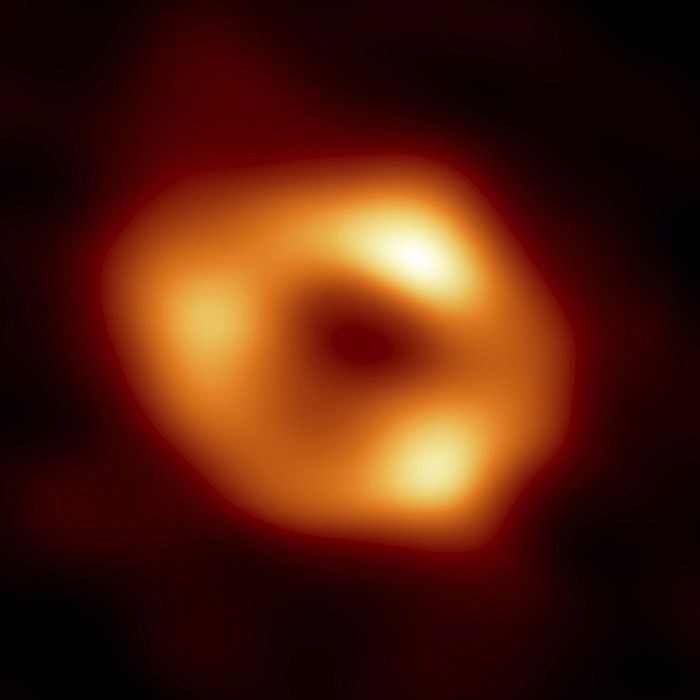 A black hole is seen at the center of the Milky Way galaxy. The black hole, called Sagittarius A*, is near the border of the Sagittarius and Scorpius constellations. It is 4 million times more massive than our sun. (AP/Event Horizon Telescope Collaboration)

WASHINGTON -- The world's first image of the supermassive black hole at the center of our Milky Way galaxy doesn't portray a voracious cosmic destroyer but what astronomers Thursday called a "gentle giant" on a near-starvation diet.

Astronomers believe nearly all galaxies, including our own, have these giant black holes at their bustling and crowded center, where light and matter cannot escape, making it extremely hard to get images of them. Light gets bent and twisted around by gravity as it gets sucked into the abyss along with superheated gas and dust.

The colorized image unveiled Thursday is from an international consortium behind the Event Horizon Telescope, a collection of eight synchronized radio telescopes around the world. The project used an observational technique known as Very Long Baseline Interferometry, which requires careful calibration to allow multiple radio dishes spread across the planet to function as if they were a single, Earth-size instrument. The consortium claims that this technique allows resolution of distant objects that would be the equivalent of being able to spot a pingpong ball on the moon.

The achievement, supported by the National Science Foundation, relied on contributions from more than 300 scientists at 80 institutions. One of the telescopes is at the South Pole. The data collected took years to process and analyze.

Getting a good image was a challenge; previous efforts found the black hole too jumpy.

"It burbled and gurgled as we looked at it," the University of Arizona's Feryal Ozel said.

"We find a bright ring surrounding the black hole shadow," she said. "It seems that black holes like doughnuts."

She described it as a "gentle giant" while announcing the breakthrough along with other astronomers involved in the project. The picture also confirms Albert Einstein's general theory of relativity: The black hole is precisely the size that Einstein's equations dictate. It is about the size of the orbit of Mercury around our sun.

Black holes gobble up galactic material but Ozel said this one is "eating very little." It's the equivalent to a person eating a single grain of rice over millions of years, another astronomer said.

"Pictures of black holes are the hardest thing to think about," said astronomer Andrea Ghez of the University of California, Los Angeles. She wasn't part of the telescope team but earned a Nobel Prize for the discovery of the Milky Way's black hole in the 1990s.

She said the image of "my baby" is exactly how it should be -- an eerie-looking orange-red ring with utter blackness in the middle.

Scientists had expected the Milky Way's black hole to be more violent, especially since the only other image from another galaxy shows a far bigger and more active black hole.

"It is the cowardly lion of black holes," said project scientist Geoffrey C. Bower of Taiwan's Academia Sinica Institute of Astronomy and Astrophysics.

Because the black hole "is on a starvation diet" little material is falling into the center, and that allows astronomers to gaze deeper, Bower said.

The Milky Way black hole is called Sagittarius A (with an asterisk denoting star). It's near the border of Sagittarius and Scorpius constellations and is 4 million times more massive than our sun. Bower said it is probably more typical of what's at the center of most galaxies, "just sitting there doing very little."

It is incredibly hot, trillions of degrees, Ozel said.

What's at the very core of a black hole is a question that Vincent Fish, a research scientist at the MIT Haystack Observatory, did not attempt to answer when questioned. "It is unknowable," he said.

"They are the most mysterious objects in the universe, and they hold the keys to large-scale structure in the observable cosmos," Sheperd Doeleman, an astronomer at the Harvard-Smithsonian Center for Astrophysics and founding director of the Event Horizon Telescope, said in an interview in advance of Thursday's briefing.

"The black hole is attracting a lot of gas to it. Its gravitational pull is so strong that the matter around it can't resist. But it's pulling it into an extremely tiny space," Doeleman said. "Imagine sucking an elephant through a straw."

A black hole's event horizon is the boundary of no return -- the point at which an infalling piece of matter vanishes into an inescapable gravity well. Bizarre and mysterious as a black hole might be, it poses no threat to our world and is essentially just a part of the galactic furniture.

The same telescope group released the first black hole image in 2019. The picture was from a galaxy 53 million light-years away that is 1,500 times bigger than the one in our galaxy. The Milky Way black hole is much closer, about 27,000 light-years away. A light-year is 5.9 trillion miles.

To get the picture, the eight telescopes had to coordinate so closely "in a process similar to everyone shaking hands with everyone else in the room," said Fish.

Astronomers worked with data collected in 2017 to get the new images. The next step is a movie of one of those two black holes, maybe both, Fish said.

Even though it is quieter than expected, the center of the Milky Way is an important place to study, Ghez said.

It's "like an urban downtown, everything is more extreme. It's crowded. Things move fast," Ghez said. "We live out in the suburbs [in a spiral arm of the galaxy]. Things are calm out here."

Information for this article was contributed by Seth Borenstein of The Associated Press and Joel Achenbach of The Washington Post.