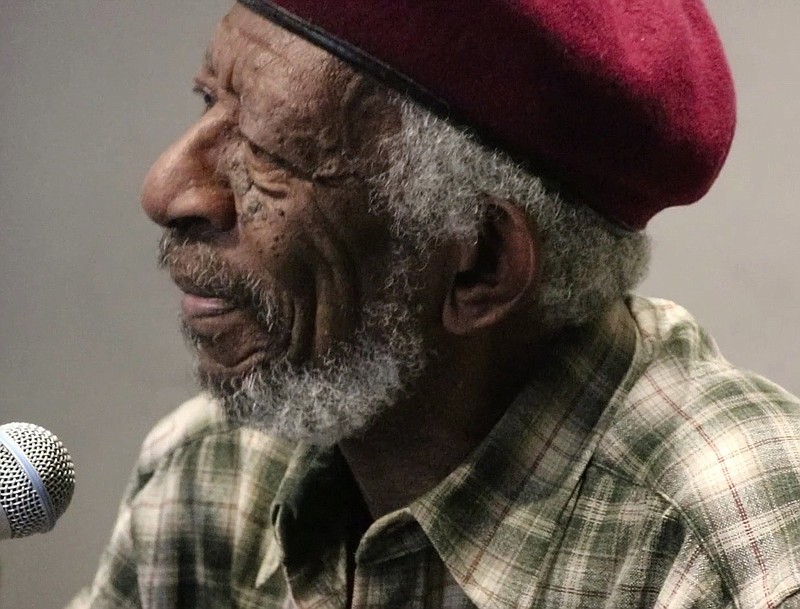 Local legend and KABF mainstay John Cain is shown in a scene from JT Tarpley’s “observational” documentary “88.3 FM & the Voice of the People,” which is streaming for free until Thursday.

I've had conversations with people recently where I've felt the need to stress the fact that at any given time in Arkansas, there are dozens if not hundreds of films in production.

Most are earnest, modest projects undertaken by ambitious people who have hopes of making a movie that others will watch and appreciate. Some of them might envision making a career of it, but most are making movies for the same reason people have always made art: to express something they need to express.

It used to be, a couple of decades ago, that making a movie was an expensive proposition. That's not the case any more -- digital tools have made it possible to achieve professional-looking video with consumer-level tools. People shoot movies on smartphones these days.

But just because anyone can make a movie doesn't mean that every movie is worthwhile. Some movies are misbegotten, best received by their makers as learning experiences. Others are nice efforts that more or less do what they are intended to do. Every once in a while, I'll see a locally produced film that evinces genuine talent.

I'm proud of the Arkansas film community. It is a supportive group.

But while we might agree that finishing a movie of whatever quality is a big achievement, maybe the equivalent of writing a novel or running a marathon, it doesn't make you all that special. Lots of people make movies. The thing that makes a movie worth the consideration of a general audience is its quality -- how well it engages, entertains and informs.

That's why we don't typically write about movies we haven't seen in this section and often refrain from writing about locally sourced and produced movies we have seen if they aren't of a certain quality.

While our duty is to our readers, not to any film community, it doesn't serve anyone's purposes to trash what is essentially a student film in print. Send me a print of your movie and I will try to give you a private critique -- although it's just my opinion -- but I'm only going to publish something about it if it meets two conditions: it's not terrible and people have an opportunity to actually watch it. Fair enough?

JT Tarpley's documentary, "88.3 FM & The Voice of the People," mentioned in this section last week, is still up on the internet at 883doc.com, available for free viewing until Thursday. I'd seen a rough cut of the film a couple of years ago, and watched the latest iteration last weekend. It's a cinema verite look at the Little Rock community radio station just before and after the presidential inauguration of Donald Trump in 2017.

Cinema verite -- also called "direct cinema" -- is a documentary technique where the filmmaker basically turns on a camera and stays out the way. The idea is to make the viewer a witness, the proverbial fly on the wall as the events play out.

It sounds easy, a sort of point-and-shoot journalism, but as Tarpley can probably tell you, it's a really hard way to tell a coherent story. You have to piece together, from hours and hours of footage, a coherent narrative that viewers can pull together for themselves. Editing is everything in a piece like this, and the need to make sense has to be balanced against the need to provide crucial information.

"88.3 FM" is a successful documentary on any number of levels, but mostly it works because of its pacing and rhythm. Tarpley can make a board meeting digestible (it helps when you have leading characters such as Wade Rathke -- also the subject of the 2018 documentary "The Organizer" -- and John Cain).

He has an ear for organically extracting the history of the station from anecdotes; there's no need to have talking heads sit for debriefing when people are telling stories on-air.

And, as D.A. Pennebaker observed of Bob Dylan during the filming of the seminal "Bob Dylan: Don't Look Back," the presence of the camera inevitably turns people into performers, which means the movie is never quite the real thing; it's always an impressionistic, subjective take. Slide the camera a few degrees left or right, you've got a whole different film.

But "88.3 FM & The Voice of the People" is Tarpley's, and we should be glad it's out there and part of the record. (Though he threatens it's going away forever after Thursday, so that's probably out of his hands now.)

And if you go to the website, be advised donations are welcome through Venmo and CashApp. It may be a lot cheaper to make a movie these days, but it's still not free.