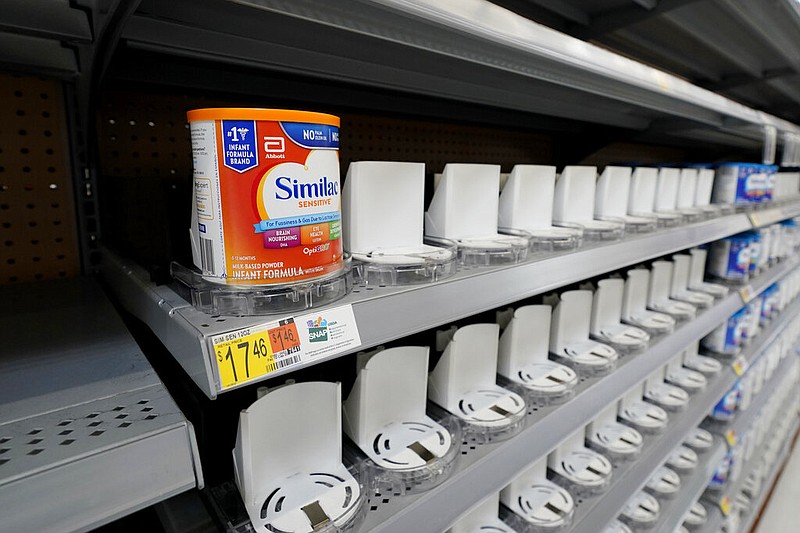 Shelves typically stocked with baby formula sit mostly empty at a store in San Antonio on Tuesday, May 10, 2022. Parents across the U.S. are scrambling to find baby formula because supply disruptions and a safety recall have swept many leading brands off store shelves. (AP/Eric Gay)

Arkansas' administration of the federal Special Supplemental Nutrition Program for Women, Infants and Children -- better known as the WIC program -- does not have a contract with the formula manufacturer whose recall disrupted the national supply due to contamination concerns, Schexnayder said.

"We have a good supply for families that are eligible for WIC, and if there's a question about that, they can reach out to their local health unit about WIC eligibility," he said.

The U.S. had been experiencing spot shortages of baby formula for months before manufacturer Abbott was forced to close its largest formula plant in February because of bacterial contamination concerns. Many leading brands have been in short supply on store shelves this week.

Schexnayder attributed some of the formula shortage to "panic buying" and said it will probably last several more weeks but the federal government could alleviate the problem sooner by "loosening up imports."

Administered by the Health Department, WIC provides nutrient-rich foods and nutrition education for infants and children 5 and younger and women who are pregnant, breastfeeding or postpartum.

Several of the baby formulas available through Arkansas WIC are manufactured by Nestlé. The program offers three types of Gerber formula for most participants.

Since some infants have specific health needs, 15 types of formula are available by special request with a doctor's prescription, according to the Health Department website. Two of the 15 types of special formula are manufactured by Abbott.

Schexnayder said breastfeeding to the best of parents' ability is highly encouraged during the formula shortage, and he also suggested that families "look at other protein sources and try to get kids to other food sources potentially a little earlier."

Parents should purchase formula from known retail sellers and not from outside the country, and they should not try to make their own formula with online recipes, Schexnayder said.

He also warned against diluting formula with water to make it last longer, saying he has seen long-term consequences of this in his clinical practice at Arkansas Children's.

"[If] the salts in the formula are diluted, particularly young infants can get too much water and it can actually cause seizures," he said. "If the salt levels in the blood get too low, the seizures can be so severe that they can cause permanent brain damage, and unfortunately that's something that happens every year."

UAMS is trying to put together a breast milk bank and donor system for Arkansas parents with babies, but it is not yet operational as of Thursday, Schexnayder said.

As a doctor who has treated seriously ill children in intensive care, Schexnayder said trying to find solutions to a formula shortage is preferable to children being sick because of bacterial contamination at a manufacturing plant. The Abbott recall was a "proactive step" before any potentially contaminated formula reached the public, he said.

"If the processes that created this shortage has prevented children from getting sick, the system is working," Schexnayder said.