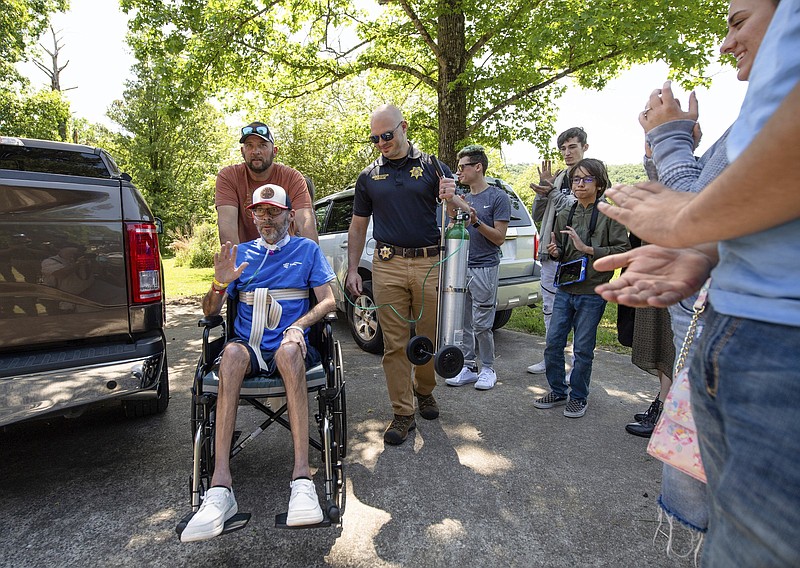 Craig Pruett returns to his home last week in Southside near Gadsden, Ala., after a 269-day battle with covid-19. (AP/The Tuscaloosa News/Gary Cosby Jr.)

At least 7 million people in the United States, by one estimate, are unable to work full time or have had to scale back their work because of long covid-19, which is defined as when covid-19 symptoms persist weeks, months or even years after the initial onset of an infection.

After graduating in the spring of 2020, Clare Banaszewski landed her dream job as a nurse practitioner in a maternity ward at a hospital in Omaha, Neb.

That winter, Banaszewski, 24, contracted the coronavirus. It was a mild case, and she bounced back after two weeks. But it wasn't long before she started feeling new symptoms: She was overcome with fatigue, struggling to make it through her 12-hour shifts, which used to fly by. She felt heart palpitations, suffered from cognitive problems and had severe headaches -- telltale symptoms of a condition known as "long covid."

She took three months of medical leave and started back with shortened, six-hour shifts. Even those were too much. Her manager was understanding, but she eventually told Banaszewski that the hospital would need to hire a replacement. Banaszewski resigned six months ago. She has been unemployed since.

Some research has shown that lingering covid-19 symptoms are more prevalent in people in their 30s and 40s. That's according to a British government study, published this month, that found that the ailment was also most prevalent in women, people living in deprived areas and those working in social care, teaching or health care or having another disability.

"We've got to, as a nation, recognize that the majority of people will be of working age, and we need to facilitate these guys working in an environment that allows them to recover while working," said Fauzia Begum, an occupational health doctor for Britain's National Health Service and the medical head of a countywide long covid-19 program in Derbyshire, England. "If you don't do that, you end up in a position where you have a lot of people who are off work."

Nisa Malli, a labor researcher who has long covid-19, said she returned to work too soon and later needed to take off a long period to recover. Malli, who said she feels 90% better two years after contracting the virus, added that she was lucky that her employer allowed her to work remotely and offered a phased return to work.

Other types of workers, however, such as chefs who lost their sense of smell or software developers who could not remember codes they wrote before they were sick, may have to change careers and need support for retraining programs, said Malli, a member of the Patient-Led Research Collaborative, a group of long covid-19 patients who are researching the disease.

The key difference between long covid-19 and other disabilities is that the virus is airborne and transmitted in the workplace and during commutes, Malli said. It is also different because of the number of people it has affected.

A study published in January by the Brookings Institution found that long covid-19 could account for 15% of the millions of unfilled jobs in the United States.

Some countries in Western Europe have robust policies to protect those with disabilities, said Philippa Dunne, one of the authors of a report published by the Solve Long COVID Initiative, a nonprofit research and advocacy group.

In the United States, however, there are fewer protections. Since people who are unvaccinated may be at a higher risk for developing long covid-19, according to the Centers for Disease Control and Prevention, companies in regions with low vaccination rates, like the South, may have more worker shortages than those in regions with higher vaccination rates, Dunne said.

A major logistical hurdle for U.S. employees with long covid-19 is qualifying for unemployment benefits. There is no single test for diagnosing it, and it is only vaguely defined, with so much still unknown. That can make it harder for people to be diagnosed and gain access to disability benefits. It can also complicate responses from employers, who are still navigating how to handle coronavirus-related work issues, including the fraught issue of whether covid-19 vaccinations should be mandatory for workers.

Katie Brennan, an adviser for the Society for Human Resource Management, said employers must consider their legal obligations to employees under the federal Family and Medical Leave Act and the Americans With Disabilities Act. With FMLA, eligible employees are entitled up to 12 weeks off, and state protections may also be in place, she said.

According to guidelines published by the European Union's workplace safety agency, "returning to work too soon or to a full workload can cause relapse." Some employees may feel guilty and find it hard to take a break when they need to, the agency's guidelines say. Encourage them to rest and recuperate, and focus on asking about their health rather than when they will be returning.

A citizen of Southside Ala., Craig Pruett, was hospitalized in August with covid-19. On May 9 -- after 269 days of care, including more than 200 on a ventilator -- Pruett made it home.

Pruett, a senior special agent with ALEA's State Bureau of Investigations, got a full law enforcement escort and a welcoming party in downtown Southside on the way home.

The "long and rough journey" is far from over, Sara Pruett said. Her husband's recovery will continue for some time.

He spent 269 days in the hospital, 213 days on a ventilator and lost 90 pounds (or half Pruett's normal weight of 180); at least two months of that time Pruett can't remember.

The Pruetts had just come home from a beach vacation on Aug. 3, 2021, when Craig Pruett noticed he had some sinus issues.

But the next day, he felt worse, she said. A chest X-ray showed he had pneumonia.

By Aug. 13, Pruett couldn't breathe. His oxygen level dropped to the 60s. Paramedics took him to Riverview Regional's ER, and he was soon admitted to the covid-19 unit.

"I don't remember anything after that. They had to suffer through that misery," Pruett said of his wife and their blended family of six children. He said it was like he was in a dream that he couldn't wake up from, where he was being treated for covid.

Once admitted, Pruett's condition worsened quickly. He went from the covid unit to Cardiac Intensive Care, and at 1 a.m. on Aug. 23, Sara Pruett got a call.

"They had no choice but to put him on a ventilator," she said. His oxygen levels were dropping, and without it, they were afraid he would code. He would be on and off the ventilator for months.

Lia Pruett said she and her brothers, Bryson and Cory, didn't hear their father's voice for six months. The first time they got to see him was Sept. 27, when doctors called in the family to say goodbye.

But nobody said goodbye.

Pruett made slow improvements from there, his wife said. In October, doctors tried to wake him up from the four or five sedation drugs he was given. At one point as they were waking him, his heart stopped. Pruett coded, and it took the team four minutes to get his heartbeat and breathing back.

For six weeks after he was admitted, Sara Pruett couldn't see him. "We managed to get the supervisor to sneak me in at exactly six weeks," she said.

That was a couple of days before the first time they thought they were losing him.

"They snuck me in again for our anniversary. He was on sedation," she said. "I stood there and held his hand on our fifth-year anniversary."

The family also went from two incomes to one, as Sara Pruett has become a full-time caregiver. Friends established a GoFundMe account to help the Pruetts. She said they had an outpouring of support during his illness, and amazing caregivers at the hospital.

Through it all, it was hard not to be discouraged, family members said.

Lia said being able to hear his voice again was an emotional moment for her, and there were others. While he still was sedated, she said, she was talking to him, telling him about the cats, and she saw him smile. "I thought, 'he's here,'" Lia said.

Pruett spent the past few weeks at Encompass Healthcare Rehabilitation Hospital working to regain strength to prepare for going home. When he left, exiting through a parade of cheering healthcare workers and greeted by friends and family outside, Jennifer Poole, director of Riverview Regional's Heart and Vascular Center, was one of those to wish him well.

Coming home, Pruett will be using oxygen, and he still has a trach tube in as a precaution. He's gained weight and is up to about 120 pounds, he said. "I can do things now I couldn't do three weeks ago."

He's going to continue his rehab, working to get his heart stronger so his lungs will work better. And he has to build his strength back up: "I lost 50 pounds of muscle," he said.

Pruett said it would be great to be walking on his own by Christmas, but he's taking the continuing recovery one step at a time, day by day.

Information for this article was contributed by Jenny Gross of The New York Times and Donna Thornton of The Gadsden Times and The Associated Press.