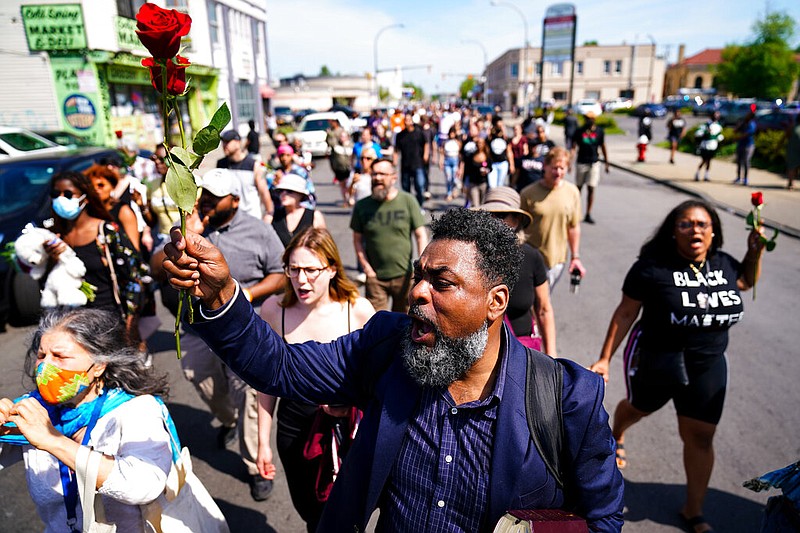 BUFFALO, N.Y. — The white 18-year-old who shot and killed 10 people at a Buffalo supermarket had researched the local demographics and arrived in the area a day in advance to conduct reconnaissance with the "express purpose" of killing as many Black people as possible, officials said Sunday.

The chilling revelation prompted grief and anger in the predominantly Black neighborhood around Tops Friendly Market, where a group of people gathered to lead chants of "Black Lives Matter" and mourn victims that included a an 86-year-old woman who had just visited her husband in a nursing home and a security guard who fired multiple shots at the suspect.

"Somebody filled his heart so full of hate that he would destroy and devastate our community," the Rev. Denise Walden-Glenn said.

Speaking at the National Peace Officers' Memorial service at the U.S. Capitol, President Joe Biden said "we must all work together to address the hate that remains a stain on the soul of America."

As the country reeled from its latest mass shooting, new details emerged about the gunman's past and Saturday's rampage, which the shooter broadcast live on Twitch. New York Gov. Kathy Hochul, a Buffalo native, demanded the technology industry take responsibility for its role in propagating hate speech and violence.

Hochul said she wants technology companies to tell her whether they've done "everything humanly possible" to make sure they are monitoring violent content as soon as it appears.

"If not, then I'm going to hold you responsible," she said.

Twitch said in a statement that it ended Gendron's transmission "less than two minutes after the violence started."

The shooter, identified as Payton Gendron, had previously threatened a shooting at his high school, a law enforcement official told The Associated Press. Buffalo Police Commissioner Joseph Gramaglia confirmed at a press conference that the then-17-year-old was brought in for a mental health evaluation afterward.

Federal law bars people from owning a gun if a judge has determined they have a "mental defect" or they have been forced into a mental institution — but an evaluation alone would not trigger the prohibition.

Federal authorities were still working to confirm the authenticity of a racist 180-page manifesto that detailed the plot and identified Gendron by name as the gunman. A preliminary investigation found Gendron had repeatedly visited sites espousing white supremacist ideologies and race-based conspiracy theories and extensively researched the 2019 mosque shootings in Christchurch, New Zealand, and the man who killed dozens at a summer camp in Norway in 2011, the law enforcement official told AP.

Portions of the Twitch video circulating online showed the gunman firing volley after volley of shots in less than a minute as he raced through the parking lot and then the store, pausing for just a moment to reload. At one point, he trains his weapon on a white person cowering behind a checkout counter, but says "Sorry!" and doesn't shoot.

Screenshots purporting to be from the broadcast appear to show a racial epithet scrawled on his rifle, as well as the number 14 — a likely reference to a white supremacist slogan.

"This individual came here with the express purpose of taking as many Black lives as he possibly could," Buffalo Mayor Byron Brown said at a news conference Sunday.

The manifesto, posted online, outlined a racist ideology rooted in a belief that the United States should belong only to white people. All others, the document said, were "replacers" who should be eliminated by force or terror. The attack was intended to intimidate all non-white, non-Christian people and get them to leave the country, it said.

It wasn't immediately clear why Gendron had traveled about 200 miles (320 kilometers) from his Conklin, New York, home to Buffalo and that particular grocery store, but investigators believe Gendron had specifically researched the demographics of the population around the Tops Friendly Market, the official said.

He conducted reconnaissance on the area and store the day before the shooting, Gramaglia said.

Gendron had appeared on the radar of police last year after he threatened to carry out a shooting at Susquehanna Valley High School around the time of graduation, the law enforcement official who spoke on condition of anonymity said. The official was not authorized to speak publicly on the investigation.

New York State Police said troopers were called to the Conklin school last June for a report that a 17-year-old student had made threatening statements. He spent a day and a half at the hospital before being released, authorities said, and then had no further contact with law enforcement.

Gendron surrendered to police who confronted him in the supermarket's vestibule and convinced him to drop the rifle he had put to his neck. He was arraigned later Saturday on a murder charge, appearing before a judge in a paper gown.

The Buffalo attack was just the latest act of mass violence in a country unsettled by racial tensions, gun violence and a recent spate of hate crimes. It came just a month after a shooting on a Brooklyn subway wounded 10 and just over a year after 10 were killed in a shooting at a Colorado supermarket.