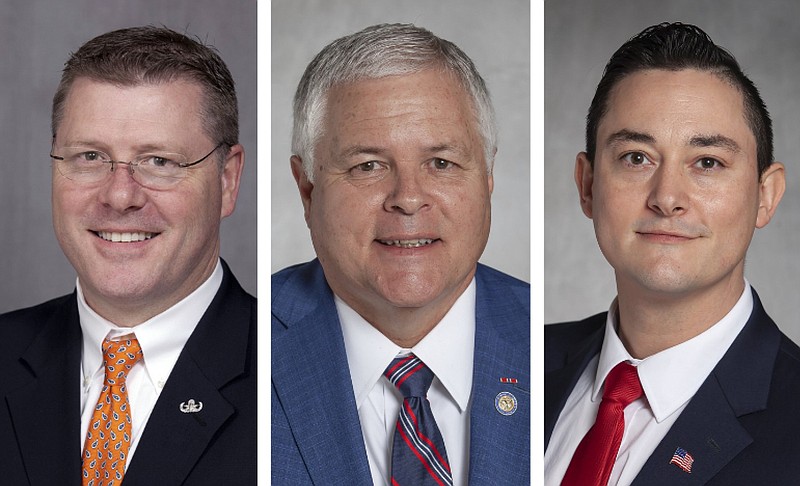 From left, U.S. Rep. Rick Crawford, state Rep. Brandt Smith and attorney Jody Shackelford are shown in this combination photo. The three Republicans are running in the 2022 primary for the 1st Congressional District seat.

U.S. Rep. Rick Crawford is squaring off against two challengers in the Republican primary for Arkansas' 1st Congressional District this month.

Crawford is a member of the House Agriculture Committee and is running with the endorsement of former President Donald Trump.

The Jonesboro Republican said his office does a great job when it comes to constituent services. One portion of constituent work is centered on getting veterans health care through the U.S. Department of Veterans Affairs, said Crawford, who is a veteran.

"If you're a veteran that has to rely on health care services from the VA, then a lot of times you need a lot of help because the VA is not a very well-run organization. And it can take a long, long time just to get an appointment," he said.

Smith, also of Jonesboro, said curbing inflation and the costs for farmers would be a focus of his in Congress.

"As I'm visiting with farmers across the 1st Congressional District, their profit margin is dropping dramatically because of high fuel costs, because of [the] cost of fertilizers, chemicals, herbicides and insecticides," he said.

"People want a more conservative congressman from the 1st Congressional District, and that's what I bring to this race," he said.

Crawford voted in line with Trump's positions 95.5 percent of the time, according to FiveThirtyEight, a data-driven news and analysis website.

Crawford was the only member of Arkansas' congressional delegation to challenge the certified election results from the 2020 presidential election on Jan. 6, 2021.

An investigation of the 2020 election by the Associated Press found fewer than 475 potential cases of voter fraud out of 25.5 million ballots cast for president across six states Trump had disputed.

Crawford said in a statement after the Jan. 6, 2021 storming of the U.S. Capitol that his "opposition to the electors was about the process by which they were seated -- nothing more."

Crawford, in a recent interview, said he's received an overall positive response from his constituents on the certification vote.

"My read was that this was the right thing," he said.

Early voting in the GOP primary started May 9. The election is set for May 24.

Shackelford, of Cherokee Village, who is also running in the Republican primary, said some main issues are the economy and "getting businesses back on track." There needs to be a new constitutional amendment that says the U.S. must have a balanced national budget, he said. Shackelford said this is his first time running for public office.

"And when I'm elected and running around the halls of Washington, I'm going to be working very hard to get support for that particular amendment," he said.

Shackelford said he voted for Trump in both elections and would vote for the former president again if he's the Republican nominee.

"I don't agree with everything he's ever said or ever done. But there's a lot of things that I do agree with," he said.

Both Smith and Democratic congressional candidate Monte Hodges of Blytheville have said the incumbent is not enough of a presence in the congressional district. Smith, in particular, has said Crawford is not as accessible to his constituents.

Crawford rejected the criticism, saying he's in the district when he's not in Washington.

"I don't check in with Monte Hodges to let him know where I'm going to be from one day to the next, nor do I check in with Brandt Smith about my schedule because we're too busy out there working for the constituents," the incumbent said.

Crawford's campaign committee raised $77,675 from April 1 through May 4 and had cash-on-hand of $543,379 at the end of that period, according to a Federal Election Commission filing.