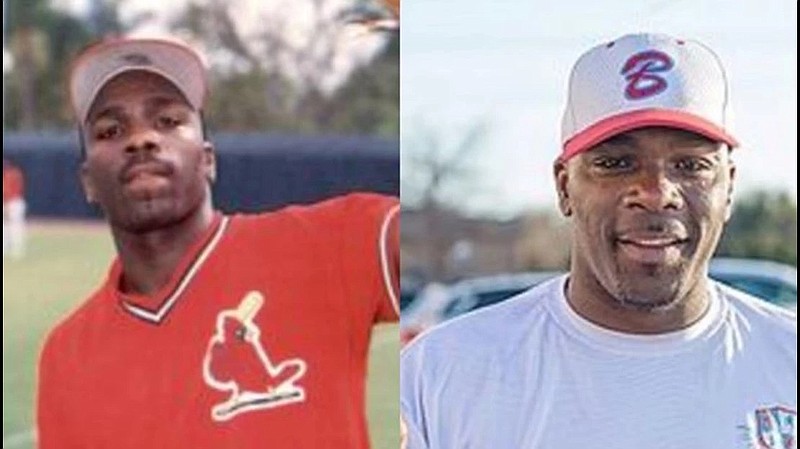 Basil Shabazz, a Pine Bluff athletic phenom and all-around athlete, has served as a standard for greatness, first as athlete and now as a coach. (Special to The Commercial/Newspaper.com/Explore Pine Bluff.com)

Shabazz had little contact with his father and moved from Pine Bluff to Little Rock to Southern California as his mother struggled to support him and his two brothers, Nsar and Ata. The family eventually settled back in Pine Bluff, where Shabazz began to flourish in sports.

The Pine Bluff community soon realized just how talented Shabazz was, especially in basketball, when at just 12 years old Shabazz could already dunk.

Upon entering high school, Shabazz and his close friend, Torii Hunter (future Major League Baseball star), realized that sports might be the way out of poverty for themselves and their families.

In an interview with ksdk.com, Hunter stated, "He and I, kind of grew up in poverty, and we were like, 'We need to get a scholarship and go to college; we've got to try to help our families.' Being so naturally gifted at sports, Shabazz just wanted to play every sport he could to the best of his abilities."

This love for sports, natural talent, and work ethic led to some of his most amazing athletic feats. As just a high school sophomore, Shabazz set a state high jump record of 6 feet 9 inches, set a state record in the 200 meter-dash by running 20.8 seconds, and set a state record of 24 feet 3 inches in the long jump.

As a high school senior, he led the Pine Bluff Zebras to a 33-13 victory against the undefeated Texarkana team, scoring five touchdowns and rushing for more than 157 yards during the first half. It was then that he earned the nickname "The Great Shabazz," which still persists to this day.

During his senior year Shabazz talked his way onto the baseball team, whose playing schedule had always conflicted with his track and field meets. It was his last chance, and he wanted to play for his high school team. And play he did. With just a partial season, Shabazz managed to hit .351 and attract the attention of college baseball scouts. By the end of his high school career, he was an All-American in four sports: football, basketball, track and field, and baseball.

Though he had college offers in football, Shabazz chose baseball and was the third-round draft pick of the St. Louis Cardinals. As a potential major league player, he was sent to Tennessee to play for the Johnson City Cardinals minor league team for development.

Unlike the other three sports he played, baseball proved the most difficult, but not enough to deter him.

Steve Durco, the manager of The Cardinals at the time, said, "He could run, he could throw, and in batting practice, you saw his raw power," Turco said. "He stole 43 bases [in 56 games, which led the league] and missed like 10 days of the season with an injury. I thought if he could learn to hit, this guy was a potential five-tool player."

Shabazz worked hard, moving his way up the ranks. He was named to the Appalachian League All-Star team, promoted to Double-A Arkansas, and ended his 1993 season as the fourth-best prospect, according to Baseball America.

A run-in occurred with campus police in October of 1994, as Shabazz and Hunter visited friends at the University of Central Arkansas in Conway. The officer saw a handgun beneath the seat and a small amount of marijuana and rolling papers. Both Shabazz and Hunter were arrested on misdemeanor charges of possession. Shabazz also was charged with felony possession of a firearm on campus. The charges were eventually dropped four months later, but by then The Cardinals had already released Shabazz.

Shabazz enrolled at the University of Arkansas at Pine Bluff in the fall of 1995 but could not play football until 1996, five years after his last game. Shabazz picked up where he left off. In one game, he returned a punt 70 yards for a touchdown in the second quarter en route to being named the game's most valuable player.

Things took a turn for the worse during his sophomore year when he suffered a serious neck injury and temporarily lost the feeling in his limbs. After suffering that loss, Shabazz moved to Texas to be with college sweetheart Reca Barnes, who was having their first child. The couple got married and had two more children.

Though Shabazz initially did odd jobs and enjoyed the anonymity of not excelling in sports, he eventually found his calling as a father, husband, a man of God, and a youth sports coach in baseball, basketball, and football.

This article is among features at explorepinebluff.com, a program of the Pine Bluff Advertising and Promotion Commission. Sources: arkansasonline.com -- Shabazz's Legend Still Endures Today; wholehogsports.com -- The One That Got Away: Shabazz Opens Up After years of Silence; www.ksdk.com -- Cardinals Draft Pick Basil Shabazz Finds His Calling; nwaonline.com -- After 20 Plus Years, PB Legend Shabazz Enjoys Happy Homecoming. Image Credit: newspaper.com.