Finland, Sweden on path to NATO

Alliance talks up Ukraine’s war gains by Compiled Democrat-Gazette Staff From Wire Reports | May 16, 2022 at 7:09 a.m. 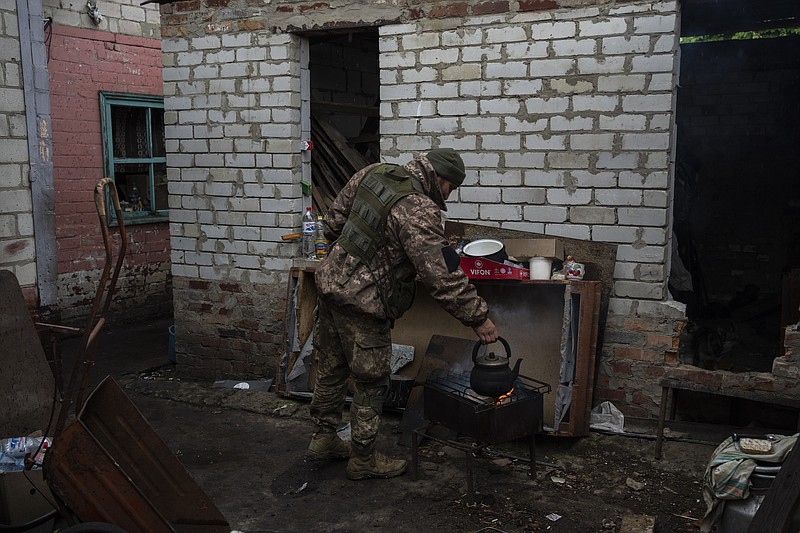 KYIV, Ukraine -- Almost three months after Russia invaded Ukraine, its military faces a bogged-down war, the prospect of a bigger NATO and an opponent buoyed Sunday by wins on and off the battlefield.

Top diplomats from NATO met in Berlin with the alliance's chief and declared that the war "is not going as Moscow had planned."

"They failed to take Kyiv. They are pulling back from around Kharkiv. Their major offensive in Donbas has stalled. Russia is not achieving its strategic objectives," NATO Secretary-General Jens Stoltenberg said.

"Ukraine can win this war," he said, adding that the alliance must continue to offer military support to Kyiv. He spoke by video link to the meeting as he recovers from a covid-19 infection.

On the diplomatic front, both Finland and Sweden took steps bringing them closer to NATO membership despite Russian objections. Finland announced Sunday that it was seeking to join NATO, citing how the invasion had changed Europe's security landscape. Several hours later, Sweden's governing party endorsed the country's own bid for membership, which could lead to an application in days.

If the two nonaligned Nordic nations become part of the alliance, it would represent an affront to Russian President Vladimir Putin, who has cited NATO's post-Cold War expansion in Eastern Europe as a threat to Russia. NATO says it is a purely defensive alliance.

Putin warned his Finnish counterpart Saturday that relations would be "negatively affected."

Stoltenberg said Sunday that the process for Finland and Sweden to join could be very quick. He also didn't expect Turkey to hold up the process.

In Finland, President Sauli Niinisto and Prime Minister Sanna Marin confirmed earlier statements that their country would seek membership in NATO during a joint news conference at the Presidential Palace in Helsinki. The Nordic country, which was nonaligned before changing its stance on NATO, shares a long border with Russia.

"This is a historic day. A new era begins," Niinisto said.

The Finnish Parliament is expected to endorse the decision in the coming days. A formal membership application will then be submitted to NATO headquarters in Brussels, most likely at some point next week.

The plan to join the alliance will be discussed in Sweden's parliament today, and Prime Minister Magdalena Andersson's Cabinet will make an announcement later today.

The decision by the Social Democrats breaks with the party's long-standing position that Sweden must remain nonaligned and means there's a clear majority for NATO membership in Parliament.

Sweden has not been a member of a military alliance since the Napoleonic Wars. Finland adopted neutrality after being defeated by the Red Army in World War II and losing about 10% of its territory.

Finland and Sweden abandoned traditional neutrality by joining the European Union in 1995.

Public opinion in both countries was firmly against joining NATO until the Russian invasion of Ukraine on Feb. 24, when support for membership surged almost overnight, first in Finland and later in Sweden.

The ex-Soviet republic of Georgia's bid to join NATO is again being discussed despite warnings from Moscow about the consequences. Both countries fought a brief war in 2008 over Georgia's breakaway region of South Ossetia.

Stoltenberg said he was confident the accession process for Finland and Sweden could be expedited. In the meantime, the alliance would increase its presence in the Baltic region to deter Russian threats, he said.

"All allies realize the historic magnitude of the moment," Stoltenberg added.

That sentiment was echoed by German Foreign Minister Annalena Baerbock.

"Sweden and Finland, if you're ready, we're ready," she said.

The Kurdistan Workers' Party, or PKK, has waged an insurgency against Turkey since 1984 and the conflict has killed tens of thousands of people. Turkey has also been infuriated by U.S. support for PKK-linked Syrian Kurdish militants to fight the Islamic State group.

Turkish Foreign Minister Mevlut Cavusoglu told reporters in Berlin that Finland and Sweden had also imposed restrictions on defense sales to Turkey that he called "unacceptable."

"It's not because we are against the expansion of NATO, but because we believe countries who support terror and follow such policies against us should not be NATO allies," Cavusoglu said.

Stoltenberg said his understanding is that Turkey wants to have its concerns over Finland and Sweden addressed first.

"Turkey has made it clear that their intention is not to block membership," he said.

Nonetheless, Turkey's raising of its grievances has led to concerns in Washington and Brussels that other NATO members might also use the admission process as a way to wring concessions from allies, possibly complicating and delaying accession.

U.S. Secretary of State Antony Blinken, who spoke with Cavusoglu and will see him again on the margins of a special U.N. Security Council meeting later this week in New York, declined to comment on those concerns. But he was optimistic that all NATO members would support bids from Finland and Sweden.

"I'm very confident that we will reach consensus," he said after the meeting in Berlin.

BATTLE IN THE EAST

Ukraine said it held off Russian offensives in the east, and Western military officials said the campaign Moscow launched there after its forces failed to seize the capital of Kyiv has slowed to a snail's pace.

Russian and Ukrainian fighters are engaged in a grinding battle for the country's eastern industrial heartland, the Donbas. Ukraine's most experienced and best-equipped soldiers have fought Moscow-backed separatists in the east for eight years.

Even with its setbacks, Russia continues to inflict death and destruction across Ukraine. Over the weekend, its forces hit a chemical plant and 11 high-rise buildings in Siverodonetsk, in the Donbas, the regional governor said. Gov. Serhii Haidaii said two people were killed in the shelling and warned residents still in the city to stay in underground shelters.

Russian missiles destroyed "military infrastructure facilities" in the Yavoriv district of western Ukraine, near the border with Poland, the governor of the Lviv region said.

Lviv is a major gateway for the Western-supplied weapons Ukraine has acquired during the war.

The Ukrainian military said it held off a renewed Russian offensive in the Dontesk area of the Donbas. Russian troops also tried to advance near the eastern city of Izyum, but Ukrainian forces stopped them, the governor of Ukraine's Kharkiv region, Oleh Sinegubov, reported.

The Ukrainian claims could not be independently verified, but Western officials also painted a somber picture for Russia.

Britain's Defense Ministry said in its daily intelligence update that the Russian army had lost up to one-third of the combat strength it committed to Ukraine in late February and was failing to gain any substantial territory.

"Under the current conditions, Russia is unlikely to dramatically accelerate its rate of advance over the next 30 days," the ministry said on Twitter.

The assessments of Russia's war performance came as Russian troops retreated from around Kharkiv, Ukraine's second-largest city, which was a key military objective earlier in the war and was bombarded for weeks. The regional governor said there had been no shelling in the city for several days, though Russia continued to strike the wider Kharkiv region.

One Ukrainian battalion that had been fighting in the region reached the border with Russia on Sunday and made a victorious video there addressed to Zelenskyy.

In the video posted on Facebook by Ukraine's Ministry of Defense, a dozen fighters stood around a blue-and-yellow post, Ukraine's colors.

One explained that the unit went "to the dividing line with the Russian Federation, the occupying country. Mr. President, we have reached it. We are here."

While he spoke, other fighters made victory signs and raised their fists.

After failing to capture Kyiv, Putin shifted the invasion's focus to the Donbas, aiming to seize territory not already occupied by the Moscow-backed separatists.

In the southern Donbas, the Azov Sea port of Mariupol is now largely under Russian control, except for a few hundred Ukrainian troops who have refused to surrender and remain holed up in the Azovstal steel factory.

Many of their wives called on the global community to secure the release of "the entire garrison," during an online news conference. The women painted a grim picture of the troops' situation, saying they suffered severe food, water and medicine shortages; untreated injuries were sometimes leading to sepsis.

The Ukrainian prosecutor-general's office said regional prosecutors have launched a criminal investigation into Moscow's alleged use of restricted incendiary bombs at the steelworks. International law allows certain use of incendiary munitions but bars their use to directly target enemy personnel or civilians. 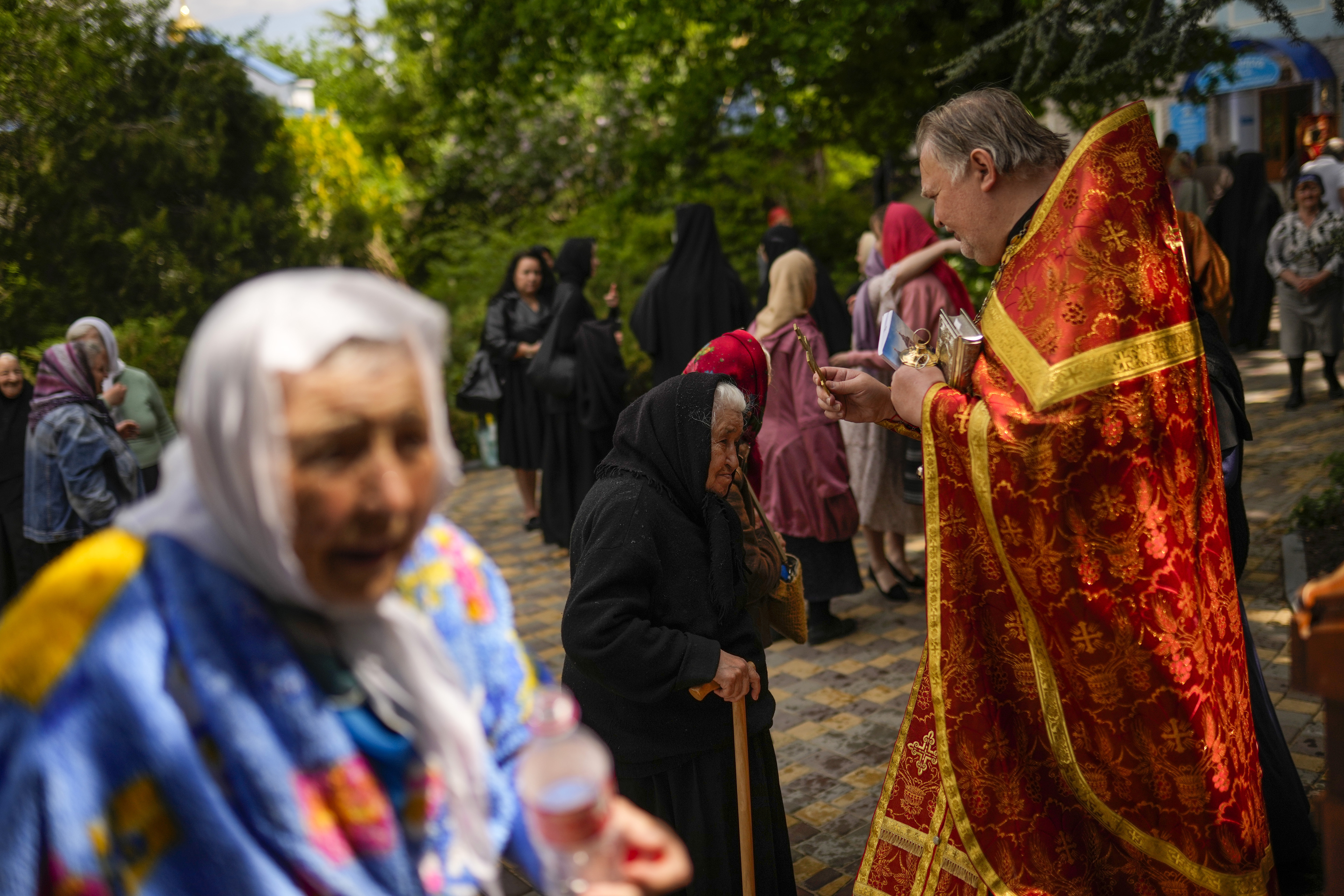 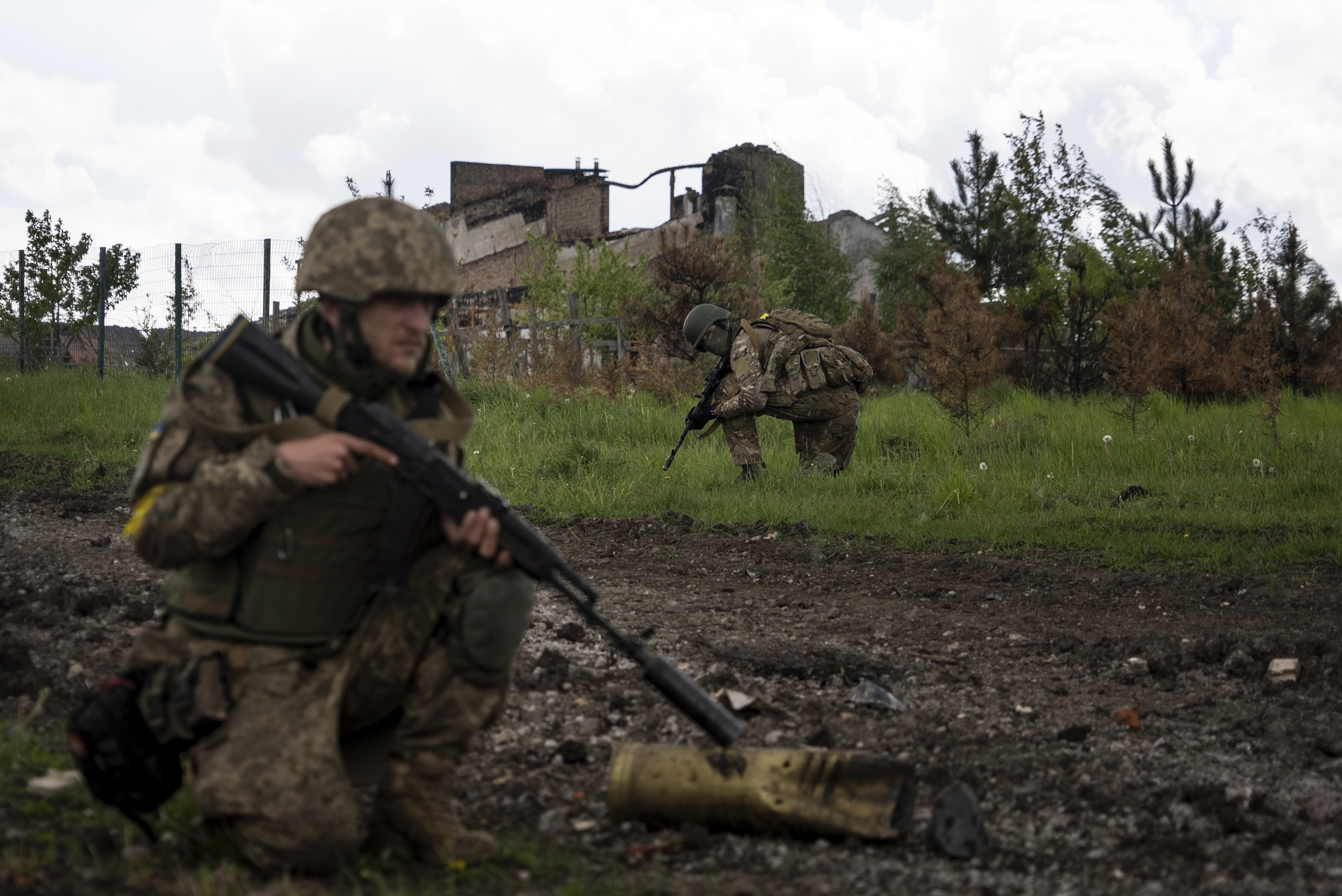 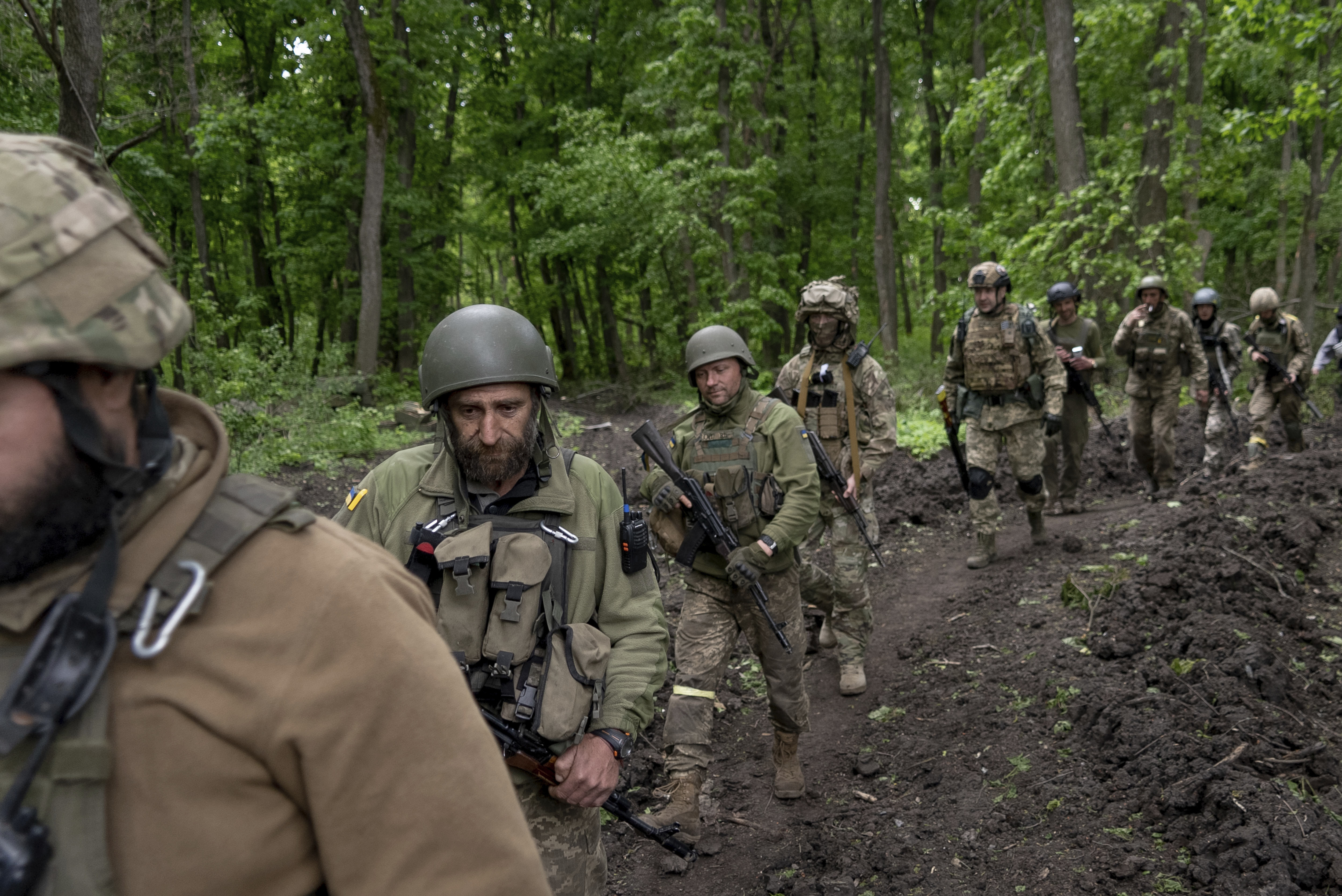 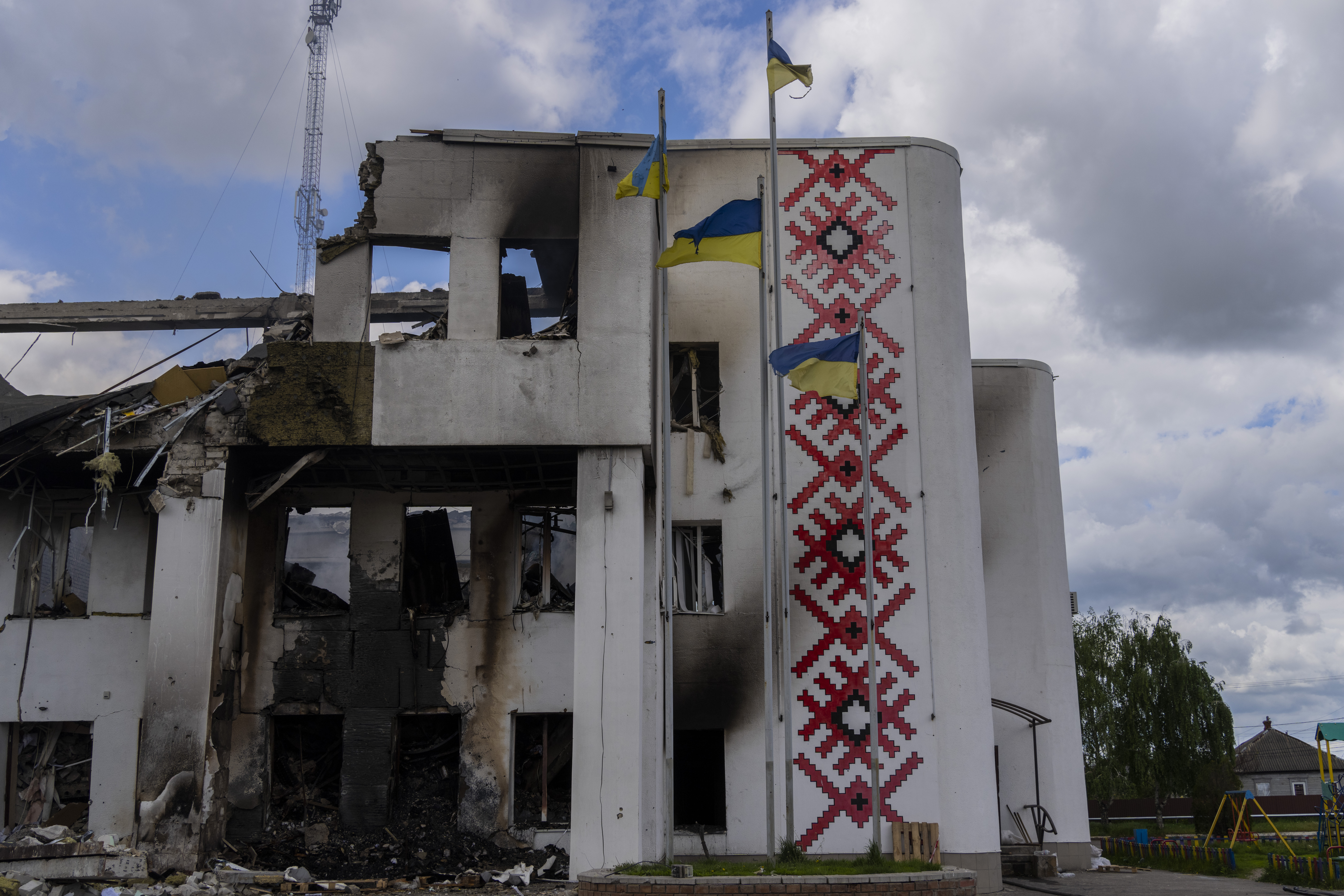 Ukrainian flags flutter outside a destroyed cultural center in Derhachi, eastern Ukraine, Sunday, May 15, 2022. A Russian airstrike destroyed the venue on May 12. (AP Photo/Bernat Armangue) 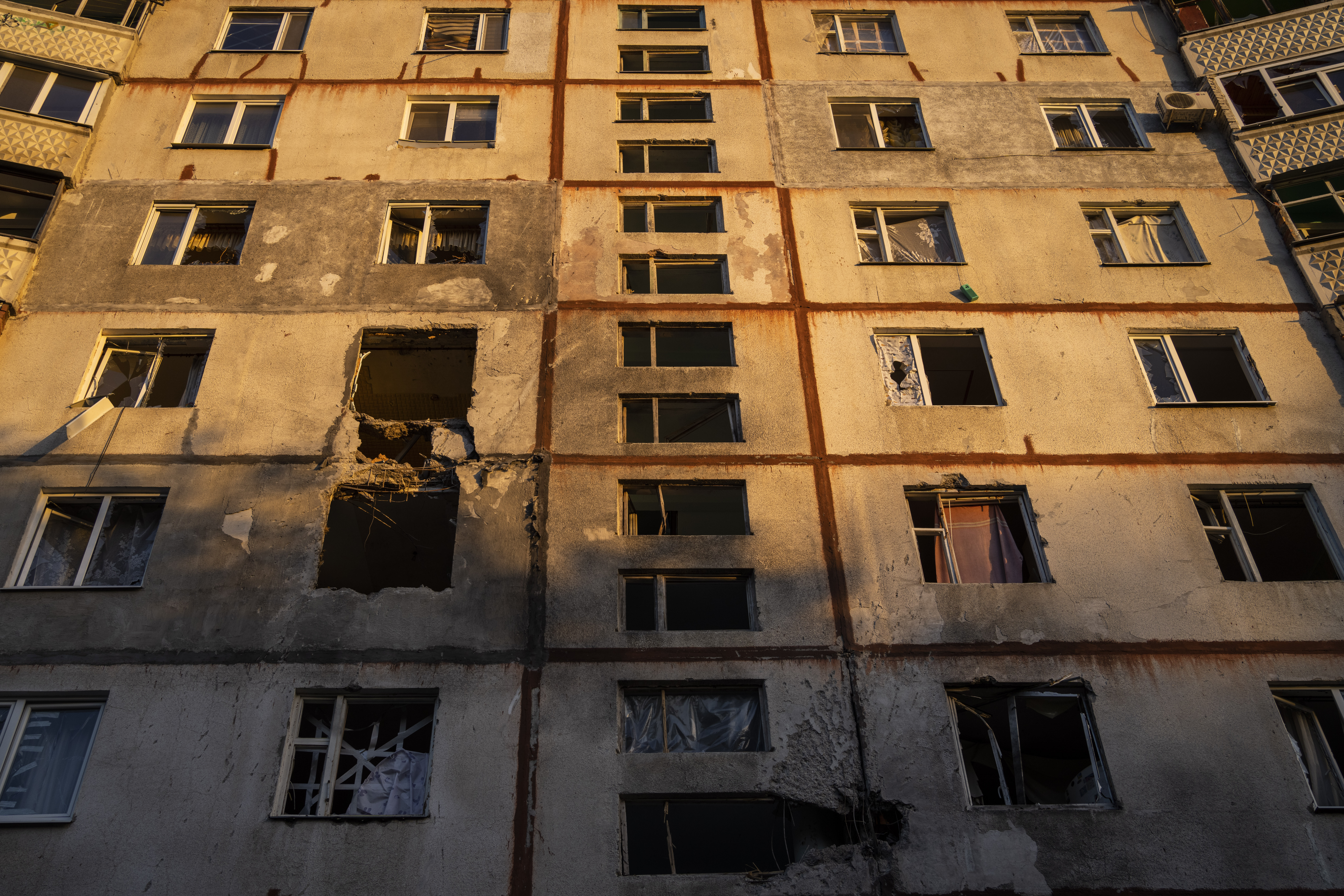 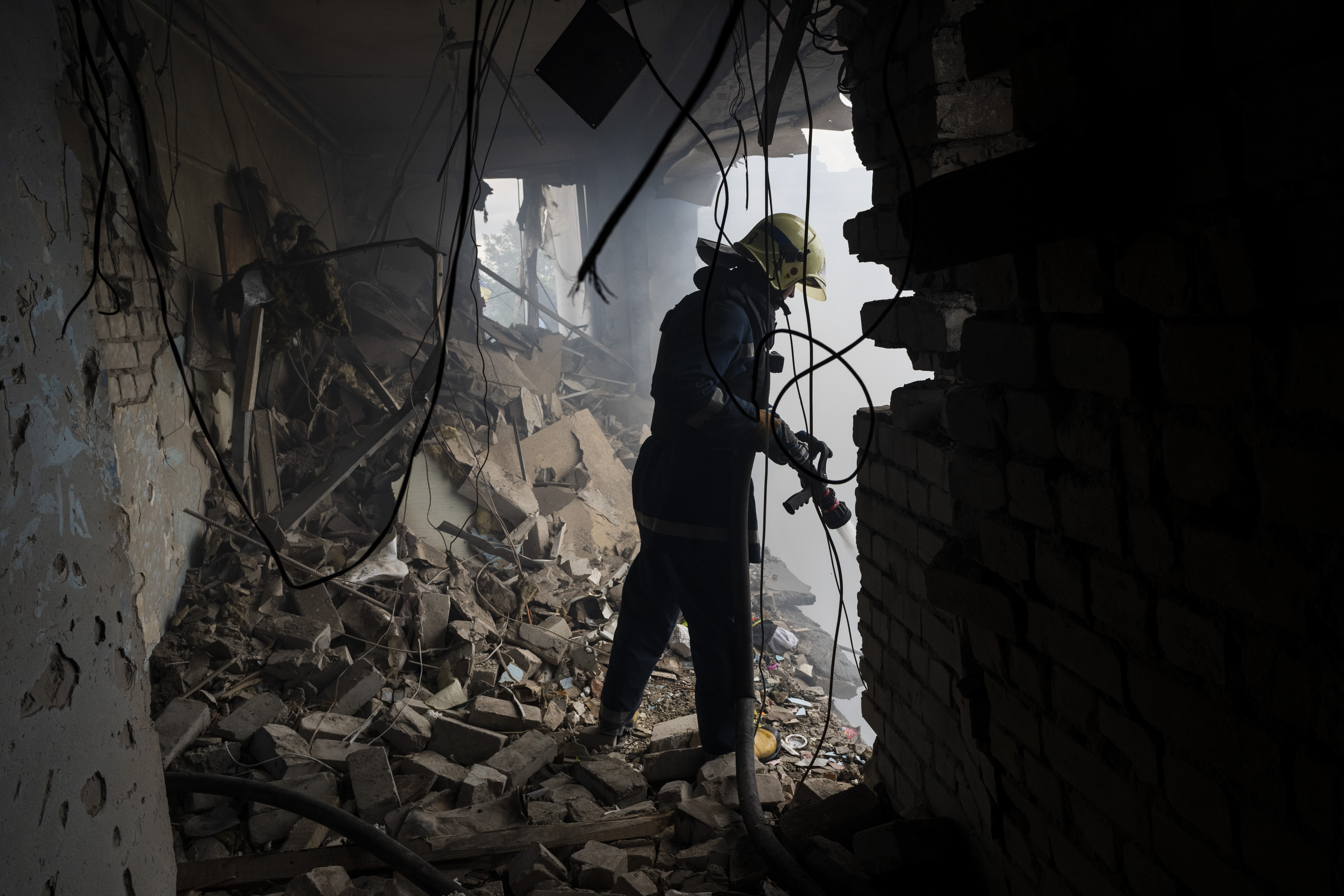 A Ukrainian firefighter works inside a destroyed cultural center in Derhachi, eastern Ukraine, Sunday, May 15, 2022. A Russian airstrike destroyed the venue on May 12. (AP Photo/Bernat Armangue) 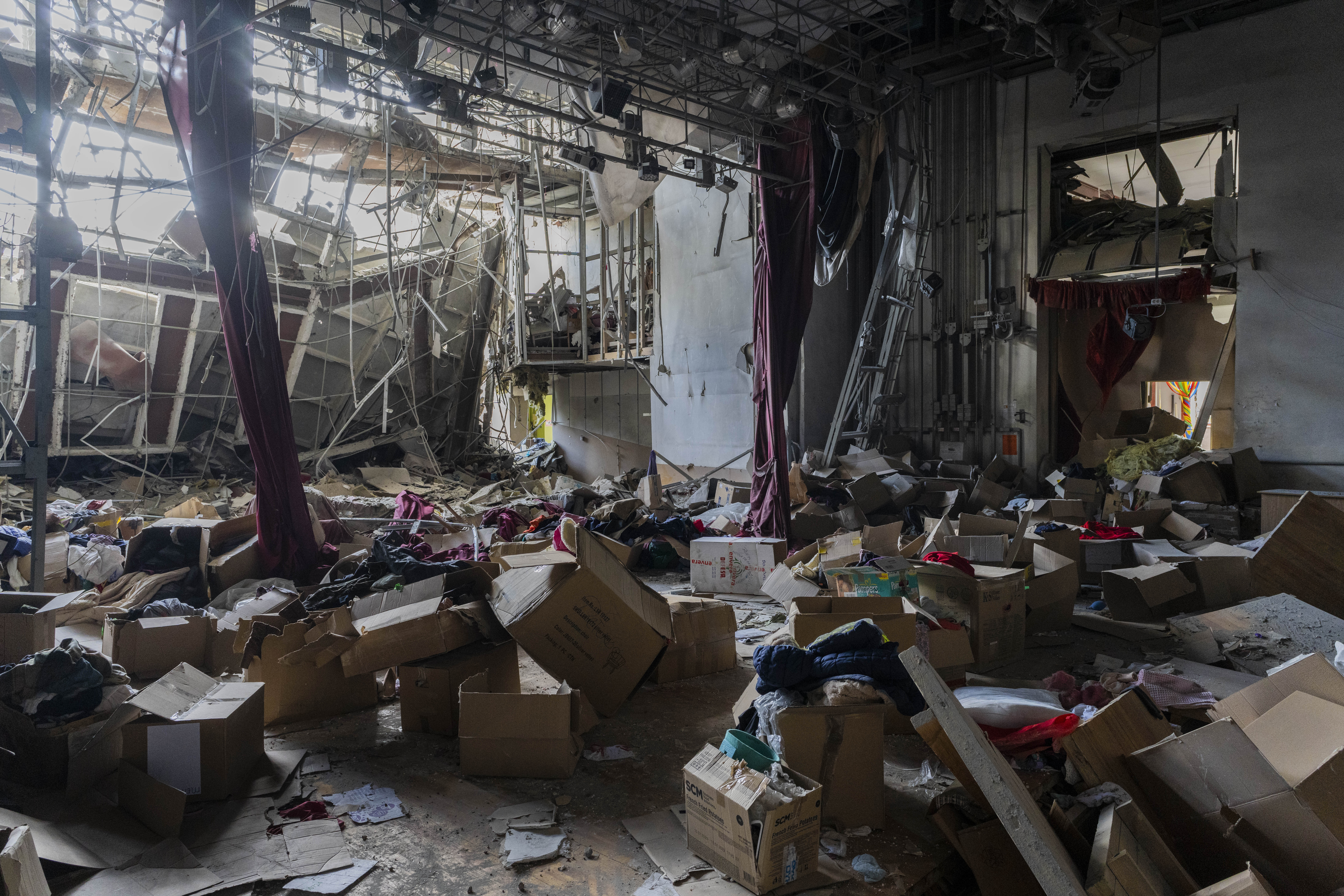 Boxes filled with clothing donations are scattered inside a destroyed cultural center in Derhachi, eastern Ukraine, Sunday, May 15, 2022. A Russian airstrike destroyed the venue on May 12. (AP Photo/Bernat Armangue) 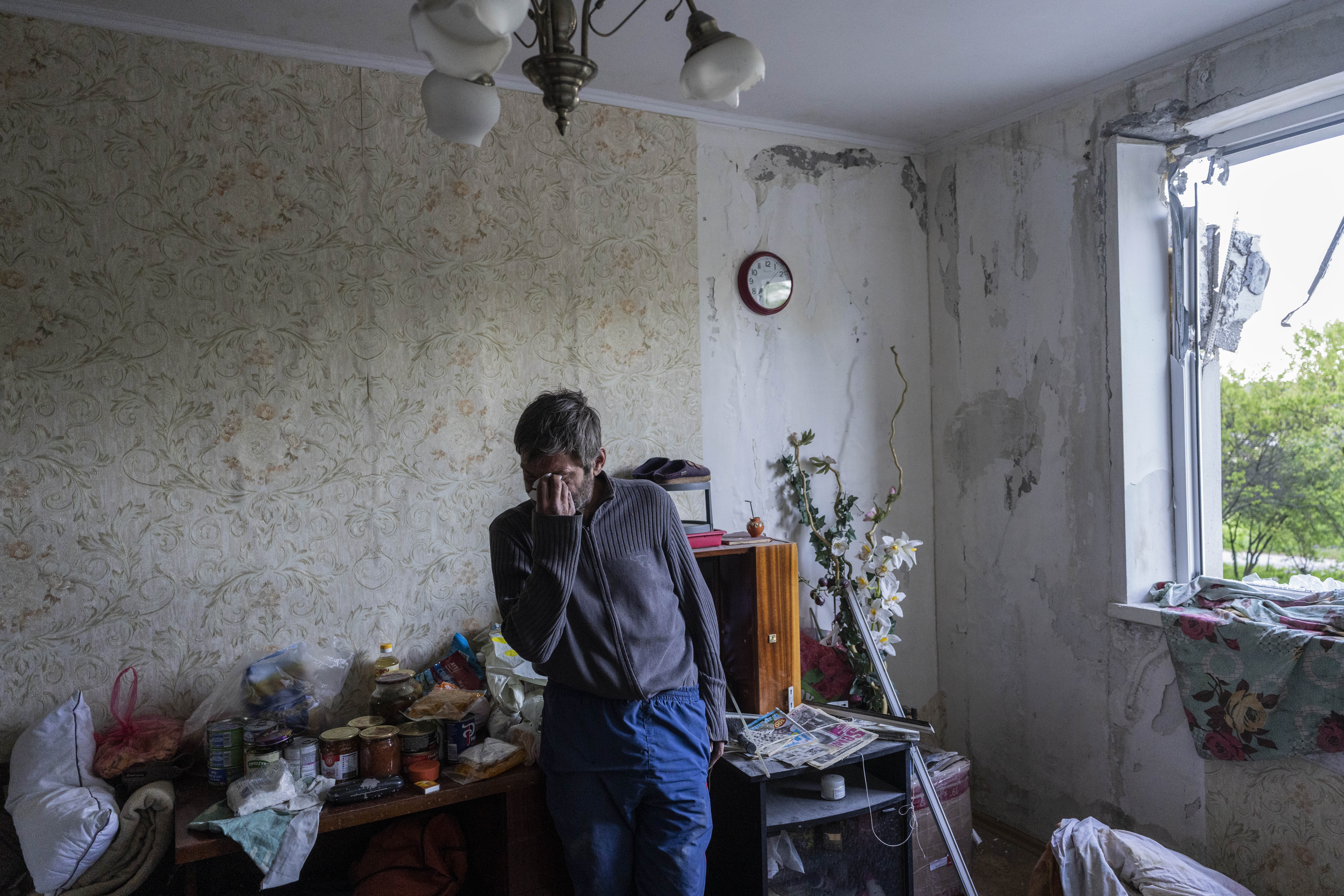 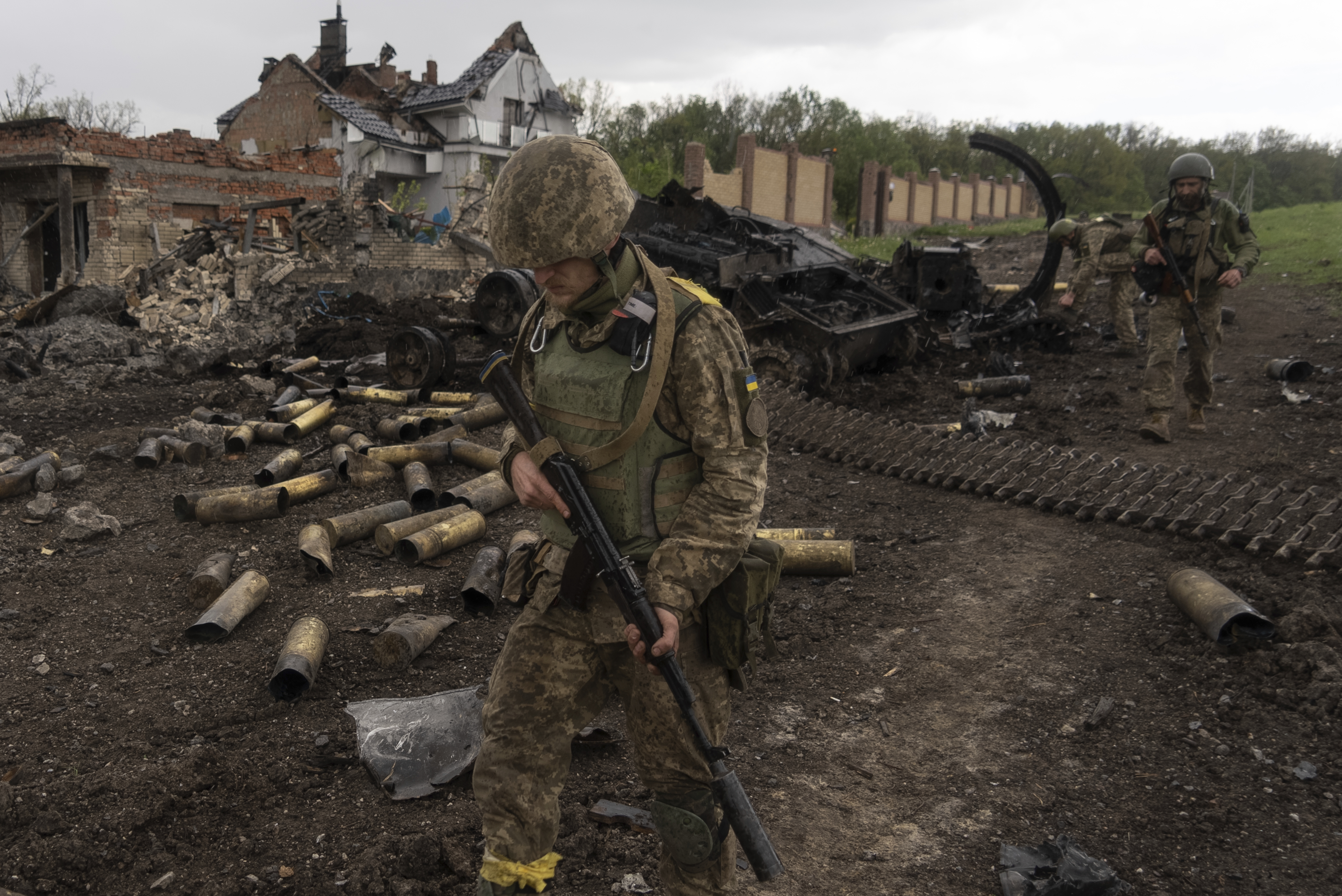