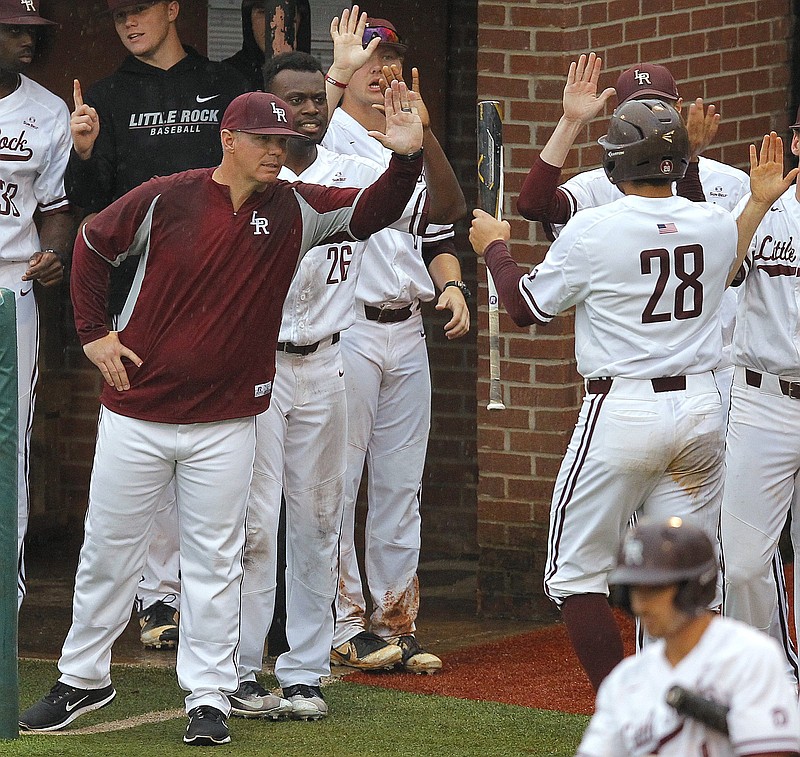 Arkansas Democrat-Gazette/THOMAS METTHE -- 5/3/2018 --.UALR head coach Chris Curry (right) congratulates Nick Perez after he scored in the bottom of the third inning of the Trojans' game against South Alabama on Friday, May 4, 2018, at Gary Hogan Field in Little Rock.

CONWAY — Shortly before first pitch Tuesday at Bear Stadium, University of Arkansas-Little Rock Coach Chris Curry could be overheard warning the umpires it was going to be a back-of-the-bullpen kind of night.

And until Trojans relief ace Sawyer Smallwood entered to seal the deal, Curry was quite prescient.

UALR and Central Arkansas combined for 15 runs on 19 hits, needing 12 pitchers to get through three-plus hours, but the Trojans avoided a season-series sweep against the Bears, taking a 9-6 win.

Smallwood pitched the last three innings for the Trojans, retiring nine of the 10 batters he faced and allowing one hit-by-pitch.

“The poor guy, Sawyer, we have gone to him over and over and over, and he’s taken the ball every time, so his arm is probably pretty tired and fatigued,” Curry said. “But this win was important to us on the road here and not wanting to lose to a team three times.”

UALR (23-24), after stranding runners in the opening two inning, pounced on UCA starter Oliver Laufman in the third. Noah Dickerson launched a grand slam nearly into the right-field parking lot and Canyon McWilliams scored on Eldrige Figueroa’s triple to the wall in right to give the Trojans a 5-0 lead.

They tacked on two more runs in the fourth when McWilliams ripped a two-out single.

But the Bears began to claw back, getting three runs in the home half of the fourth. UCA (23-27) scored two unearned runs when UALR shortstop Aidan Garrett threw away the would-be final out of the inning

The Bears then answered the Trojans’ run in the top of the sixth with three more runs. Connor Flagg, RJ Pearson and Connor Emmet all singled up the middle on three straight at-bats, with the latter two hits bringing runs across as UCA pulled within 8-6.

The Bears would get no closer, though, as Hunter Hicks popped out to end the inning, and in came Smallwood to keep the Bears off the scoreboard the rest of the night.

“We just didn’t get off to a good start — missed an opportunity offensively and didn’t compete in the zone early,” Bears Coach Nick Harlan said. “The second half of the game, I thought we really well. … A team that has character makes quick adjustments. [We] made an adjustment.”

Although both teams started a majority of their regulars, UALR and UCA each gave one of their big bats a bit of a rest. Trojans right fielder Noah Dickerson served as the designated hitter and Bears catcher Noah Argenta came off the bench as a pinch-hitter.

CORRECTION: The University of Arkansas-Little Rock baseball team defeated the University of Central Arkansas 9-6 on Tuesday night. Due to a production error, the article did not run in its entirety in Wednesday’s edition. The article has been replaced above.