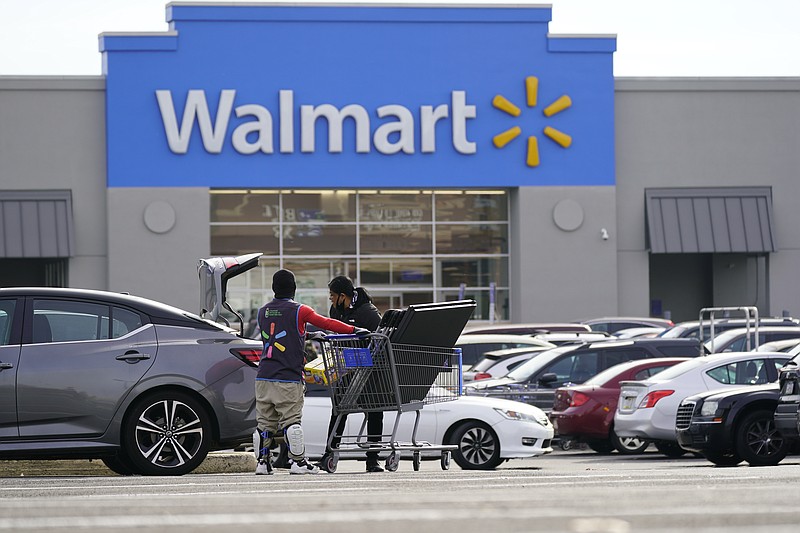 FILE - A Walmart employee helps a customer outside the Walmart store in Philadelphia, Wednesday, Nov. 17, 2021. Walmart reported stronger sales for the fiscal first quarter, Tuesday, May 17, 2022, but its profits took a beating as the nation’s largest retailer grappled with surging inflation on food and fuel and higher costs from a still snarled global supply chain. (AP Photo/Matt Rourke, File)

Walmart Inc. said Tuesday that first-quarter profit tumbled about 24% compared with the same period last year, even as revenue grew a modest 2.4%.

Per-share earnings missed the average estimate of $1.48 from 29 analysts surveyed by Thomson Reuters.

Doug McMillon, Walmart's president and chief executive officer, said in a call with investors that the company had a good quarter "from a top-line point of view."

"Sales for the period were ahead of what we expected across all segments," McMillon said, "and we're pleased with the momentum we see so far in [the second quarter]."

"The bottom line was below our expectations due primarily to three areas that negatively affected operating income in our U.S. businesses, both in Walmart and Sam's Club," McMillon said. "Each of these items represents about a third of our overall profit miss."

McMillon cited wage expenses as the first item. Employees out on covid-19 leave came back to work sooner than expected, and with the workers who'd been hired to cover for those on leave, the company ended up with several weeks of overstaffing.

That was resolved in the first quarter, largely through attrition, he said.

Also, general merchandise inventory levels, especially at Walmart U.S., were greater than desired as inflation pulled more shopper dollars into the grocery sector, McMillon said. General merchandise refers to nearly anything other than groceries, from paper goods and pet food to appliances.

The third item is related to fuel costs in the supply chain, he said.

In addition, inflation is affecting the company's top and bottom line, McMillon said.

"We'll control what we can control, reduce our inventory level, and keep prices as low as we can, especially on opening price point food items, while improving our profit performance," McMillon said.

"It's the profitability that came in well below plan, and the fact that they lowered their full-year guidance," he said.

Walmart had previously expected profit of about 5%, Yarbrough said. "Now they're saying 'flattish,'" he said.

Carol Spieckerman, a retail consultant and president of Spieckerman Retail, said excess inventory and markdowns "threaten to become the unwelcome gifts that keep on giving into the back-to-school season."

But she called inflation "the elephant in the room."

"On one hand, Walmart is well-positioned to weather inflation when compared to its competitors," Spieckerman said. "It has the buying clout and business model diversity to adjust."

Still, Spieckerman said, "Walmart operates under a low-cost premise and relies heavily on price-sensitive categories like grocery to drive traffic. Any uptick in in prices can impel shoppers to migrate to alternatives such as Aldi or dollar stores."

Then Walmart loses its ability to trigger sales in higher-margin categories, Spieckerman said, "Those are the very categories that plummeted by double digits."

Yarbrough agrees. While Walmart remains strong in grocery sales, those are low-margin items, he said.

"At the end of the day, inflation needs to come down," Yarbrough said. The company still skews toward the lower-income shopper, and even with markdowns, general merchandise inventory is still too high.

"With inflation as high as it is -- 9% to 10% -- the lower-income families can't afford the general merchandise," he said.

Analysts will be watching Walmart rival Target Corp., which reports its quarterly earnings today, to see if it's feeling the same inflationary pinch. However, Target shoppers generally have higher household incomes that consumers who shop at Walmart.

Walmart's U.S. unit, by far its largest, posted net sales of $96.9 billion in the quarter, up 4% from last year's first quarter.

Sales at stores open at least a year, also called same-store sales, rose 3% and gained market share in grocery. Same-store sales are considered a key indicator of a retailer's health.

The unit's e-commerce sales ticked up 1%.

Walmart International's net sales fell 13%, to $23.8 billion. The company said the results were negatively affected by $5 billion due to divestitures and $4 million in currency fluctuations.

Same-store sales were positive in all markets, however, led by Canada and Mexico.

A replay and transcript of Tuesday's presentation and conference call with investors are available at Walmart's corporate website by logging into http://corporate.walmart.com/newsroom/financial-events and selecting the First Quarter Earnings Release event.