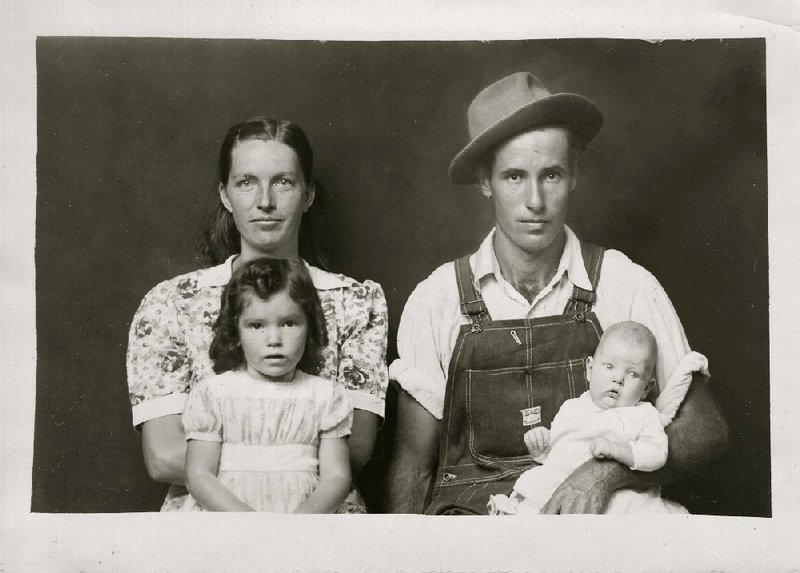 This family photograph is part of an exhibition of portraits by Mike Disfarmer.

The estate of an eccentric Heber Springs photographer who died in 1959 has been reopened.

Fred Stewart, the great-great-nephew of Disfarmer, petitioned the court in January 2021 to reopen Disfarmer's estate, saying the contents of his studio -- including 4,000 glass negatives -- weren't part of the probate administration of his estate 60 years ago.

The negatives were sold at an "estate sale" for $5 in 1959, according to court filings. And that $5 was included in the total $18,146.80 from Disfarmer's estate that was divvied up between his three surviving siblings and the children of his other three siblings. When Disfarmer died, he left no wife, no kids and no will.

"It appears that the Negatives were wrongfully taken from the Decedent's residence by unrelated third parties who then used them for their own gain and benefit," according to Stewart's petition.

In 1977, some 3,000 of the Disfarmer negatives were donated to what is now the Arkansas Museum of Fine Arts Foundation in Little Rock. About 1,000 of the original 4,000 negatives couldn't be salvaged or were destroyed, according to a court filing. Bacteria was devouring the animal-gelatin emulsion on many of the negatives, which had been stored for over a decade in a garage.

Disfarmer was "discovered" by the art world in the 1970s. Since then, his photographs and negatives have become very valuable.

"Recently, Petitioner and other heirs of the Decedent have discovered that valuable property belonging to Decedent, consisting of thousands of negative plates of photographs shot by the Decedent, was not administered during the original probate of this Estate," according to Stewart's petition. "It is Petitioner's information and belief that the Negatives are extremely valuable. Those Negatives were not inventoried by the previous administrators, administered and distributed to the Decedent's heirs."

But Stewart's learning the negatives exist doesn't mean they've been "discovered" in the legal sense of the word, John Tull, the museum foundation's attorney, wrote in response.

Tull argued that the negatives were administered during the original probate case and what little money they fetched was distributed to the heirs, who showed little interest in the negatives at that time.

In his petition, Stewart said Disfarmer was the "sole owner of the copyrights" of his photographs at the time of his death, and those rights should have been passed on to his heirs.

Stewart asked the judge to reopen the estate and appoint him as special administrator.

"The Petition to Reopen and Appoint Special Administrator is granted," she wrote in a letter to attorneys involved with the case. "The Petitioner is qualified under the old probate code and a fiduciary under the present code and therefore an interested person. In this circumstance he is the chosen and nominated representative of scores of heirs and otherwise well qualified."

Meyer's letter to Tull and Grant Fortson, Stewart's attorney, is dated May 12 and was filed with the circuit clerk's office on Thursday.

"The Petitioner asserts that estate assets (copyrights) have recently been discovered and the state should be authorized to litigate its interest in same," Meyer wrote in the letter. "This court has studied the underlying claim but is not able to rule on the ultimate merits of a claim that is not yet even filed. The Museum's disputed assertion that the claim is without merit is not a cause to deny reopening the estate."

Judge Meyer asked the attorneys to present an order consistent with her letter.

Robert Steinbuch, a professor at the W.H. Bowen School of Law at the University of Arkansas at Little Rock, said the judge's ruling means "the ownership of those negatives is up in the air."

And making Stewart special administrator "is some indication that the court is sympathetic to the view that some relatives were not properly dealt with 60 years ago," said Steinbuch.

Now they can have court hearings on those issues, he said.

Stewart, who lives near Little Rock, said he was happy with the development.

"Almost three years ago, our family came together in an attempt to correct an issue with our inheritance," he said. "We all agreed that we would do our best not to harm the public image of anyone involved. The wheels of justice sometimes turn slowly, but they do turn."

Disfarmer's black-and-white portraits of Arkansans were heralded by art critics after they were revealed to a wider audience in the 1970s, first in the pages of Modern Photography magazine and later in a book titled "Disfarmer: The Heber Springs Portraits, 1939-1946."

"Mike Disfarmer's direct, full-figure frontal portraits of residents of an Arkansas town are echoes of the sort of pictures made in the last century," Peter Bunnell wrote for The New York Times in December 1976. "They are not nostalgic but haunting, suggesting daguerreotypes of strangely familiar yet unknown relatives."

"The works of Mike Disfarmer, a small-town portraitist from Arkansas whose style-less pictures of small-time cotton farmers and their families, taken during the years of the Second World War, can stand comparison with the works of August Sander, Diane Arbus and Irving Penn," Gene Thornton wrote for the same newspaper a couple of weeks later.

Stewart's petition generated a flurry of court filings from attorneys on both sides.

In July, an amended petition was filed to reopen the estate on behalf of Ellen Lorene Stewart of Little Rock and her son, Fred Stewart. That filing came after Tull objected to Stewart's original petition, saying among other things that Fred Stewart wasn't an heir or "interested party" under Arkansas Code Annotated 28-1-102(a)(10-11), and therefore lacked standing to petition the court. Ellen Stewart had a closer familial connection with Disfarmer, but Judge Meyer's letter indicated she deemed Fred Stewart an interested party under state law.

Last month, in a brief, Tull wrote, "It is time to end Ms. Stewart's efforts that started only after a cold call from a lawyer in another state. The Foundation is the rightful owner of the property at issue, and the futility of reopening the estate is not required to confirm that."

The Foundation has spent hundreds of thousands of dollars to preserve the negatives, wrote Tull.