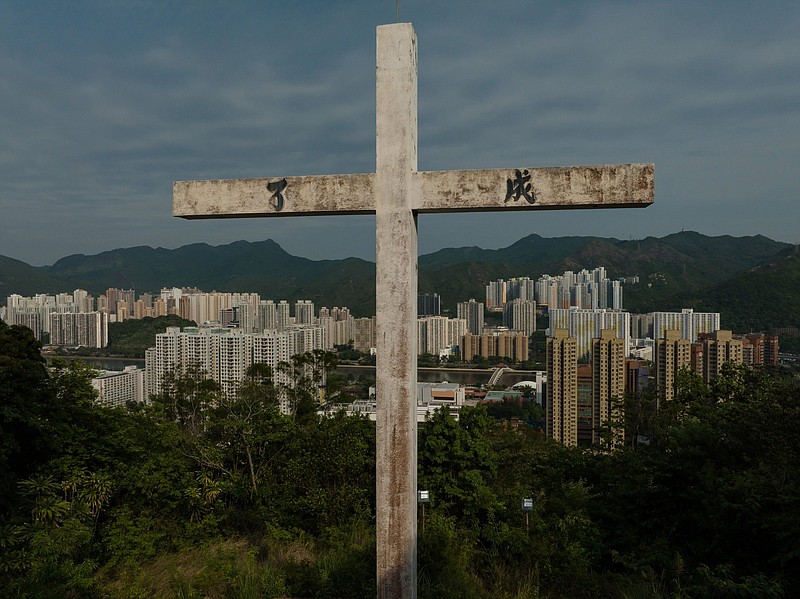 A 40-foot-high cross, erected in 1958, remains in Hong Kong, despite the 1997 transfer of sovereignty from the United Kingdom to China. (Washington Post/Anthony Kwan)

HONG KONG -- On a drizzly Sunday evening in May at the Hong Kong government headquarters, a small group gathered under a footbridge around an altar made with portable lights and a folding chair.

In a gray sweater and a purple stole, Father Franco Mella held Mass, like he has every Sunday for the past seven years, to pray for the activists and protesters arrested in the city's widening crackdown on dissent. "Sing Hallelujah to the Lord ..." the group sang, nearly drowned out by the traffic.

Moments later, a woman approached the group, took video and recorded the identity numbers of several participants before leaving in a police car. "We are mentally prepared to be arrested some day," said Winnie Wong, one of the organizers.

Mella, an Italian priest who at 73 has been advocating for human rights for the past five decades, is unruffled by the attention. "If you can accept uncertainty, you won't fear."

Hong Kong's wide-ranging crackdown on all forms of social protest is now being felt by its churches, a backbone of the city's once vibrant activism, and its religious spaces are now being brought under state control much the way they are in the rest of China.

Earlier this month, the Hong Kong national security police arrested 90-year-old Cardinal Joseph Zen, the most outspoken senior Roman Catholic cleric in Hong Kong and the city's former bishop for involvement in a humanitarian relief fund that supported jailed activists. The Hong Kong government has said the arrests have "absolutely nothing to do" with religion and are just a matter of laws being violated.

After pro-democracy protests began in 2019, Beijing instituted a wide-ranging national security law in 2020 that has crushed dissent on the island territory. Just as educators, journalists and artists have been silenced, Hong Kong's churches, once spaces for discussing social concerns, have increasingly come under pressure.

According to 18 ministers and religious experts interviewed by The Washington Post, churches have been pushed into censoring themselves and avoiding appointing pastors deemed to have political views, and at least one major church is restructuring itself in case the government freezes its assets.

A study by the Hong Kong Church Renewal Movement last year revealed that more than a third of churches were now more inclined to adjust the content of their preaching in light of the political situation in the city.

One pastor said the nervous church leaders couldn't order you to leave if they see you as a problem, but "they will 'remind' you, pressure you, so that you will have to leave on your own." As with many of those interviewed, he spoke on the condition of anonymity because of the tense political situation.

Christianity has long had an outsize role in this former British colony with opposition activists and leaders at the highest levels of power drawing inspiration from their faith. Hong Kong's current and incoming chief executives, Carrie Lam and John Lee, are self-described Catholics educated in century-old Catholic schools.

Pro-democracy advocates such as Joshua Wong and media mogul Jimmy Lai have cited their faith as the moral compass for their activism. Wong, raised as a Lutheran, led the pro-democracy Umbrella Movement in 2014 and has said his faith strengthened his determination to fight for justice.

During the 2019 pro-democracy protests, pastors would lead their adherents in sit-ins, prayers and singing "Hallelujah to the Lord," imploring the government to meet protesters' demands for accountability and universal suffrage. The song became a symbol of peaceful protests and the freedom of assembly once allowed in the semiautonomous city that operated under the "one country, two systems" policy, which once gave it so much more freedom than the rest of China.

In the new environment, religious institutions are leaning on their members to censor themselves to avoid trouble with the authorities.

"Many people avoid the pitfalls on their own," said Hung Kwok-him, a pastor who left Hong Kong for Taiwan in 2021.

As part of Beijing's efforts to rein in what it saw as increasingly unacceptable behavior in the city, it appointed in February 2020 a new head of Hong Kong and Macao affairs, Xi Baolong, who gained prominence for his earlier crackdown on illegal churches in Zhejiang, China, by removing their crosses.

Five months later, after the new security law was passed, a pro-Beijing state media outlet posted a list of 20 pastors, accusing some of them of being "riot supporters."

Fearful of arrest, at least five outspoken pastors subsequently left for Britain and Taiwan. In April, a minister was charged with sedition, for disrupting court proceedings and vilifying the judiciary after he commented on the ongoing trials on his YouTube channel.

Churches have always been subjected to tight control in the mainland, which many fear will be the future for Hong Kong's religious institutions. In October, China's state-backed bishops briefed several senior Hong Kong clergymen on President Xi Jinping's views on religion, under the supervision of Beijing's Hong Kong Liaison Office and China's religious bureau.

The man who may well be central to the integration of Hong Kong's churches into China's system is Peter Koon, an Anglican cleric who is the first member of a religious institution to be elected to Hong Kong's pro-Beijing legislature.

Pastors have said Koon cleaves closely to Beijing's model for a clergyman: patriotism before faith.

Koon has backed the establishment of a government religious committee, which some worry could come to resemble China's overbearing religious bureau. Koon said the committee would help institutions "complete tasks" such as identifying sites for construction of religious facilities "more smoothly." But pastors expressed worries that the new committee will be a tool to tighten the state's grip on churches.

"Setting up a religious committee could be a convenient way to control the churches," said Hung, one of the pastors who fled the country. "The authorities could strip away their status as a registered church if they disobey."

Koon told The Washington Post there is still space to talk about social problems within churches, such as the poverty gap and housing policies, and pastors need not overly self-censor. There is no conflict between faith and patriotism because loving the country is a "basic requirement" and religious freedom is "guaranteed in the Basic Law," he said.

"Some may ask whether criticizing the government will be treated as subversion of a country, I don't think that is the case. It will be terrible if so," he said.

But with harsh strictures on mainland churches as a reference point, pastors and churches in Hong Kong are bracing for the worst, and many are being careful about what they say and discuss in sermons.

"If you want to stay in this space, you need to be 'wise as serpents and harmless as doves,'" said Nelson Leung, general secretary of the Hong Kong Church Renewal Movement, citing Scripture. "We need to tap into our wisdom."

John Chan, assistant professor at the Alliance Bible Seminary, noted that ministers have ceased to address politics in their sermons, whether online or in person. He said churches are devising alternate plans to operate, changing "the whole ecosystem," so that "the eggs will not all topple at once."

In late 2021, the Christian and Missionary Alliance, one of Hong Kong's three largest Christian organizations, passed a motion in its annual general meeting to split its churches from one umbrella company into separate entities, according to a document seen by The Post. The move was a way to prevent the whole organization from toppling if the government decides to freeze assets, according to two people familiar with the matter.

Hong Kong's Evangelical Lutheran Church, meanwhile, has in the past year issued an internal memo about qualifying only pastors who won't make problems with the government. The memo, which was seen by The Post, stipulated that because ministers could eventually become bishops, who have a huge influence on the "political stance" and "relationship with the government" and with church members and workers, examiners would need to factor this into account when making hiring decisions.

Hong Kong's clergy are now rethinking ways of carrying out their preaching to balance between speaking out for social justice and the safety of their churches and families.

Pastor Shou King-kong, who has been running sermons with 10 people at a time since January last year, said "mosquito-sized churches," independent from registered church or charity organizations -- and the new strictures of the state -- will be the norm in the future.

"To continue to speak the truth and call out for social justice, to tell people what the Bible teaches and how the Christ taught us, shall be the greatest challenge we endeavor in this era," Shou said. 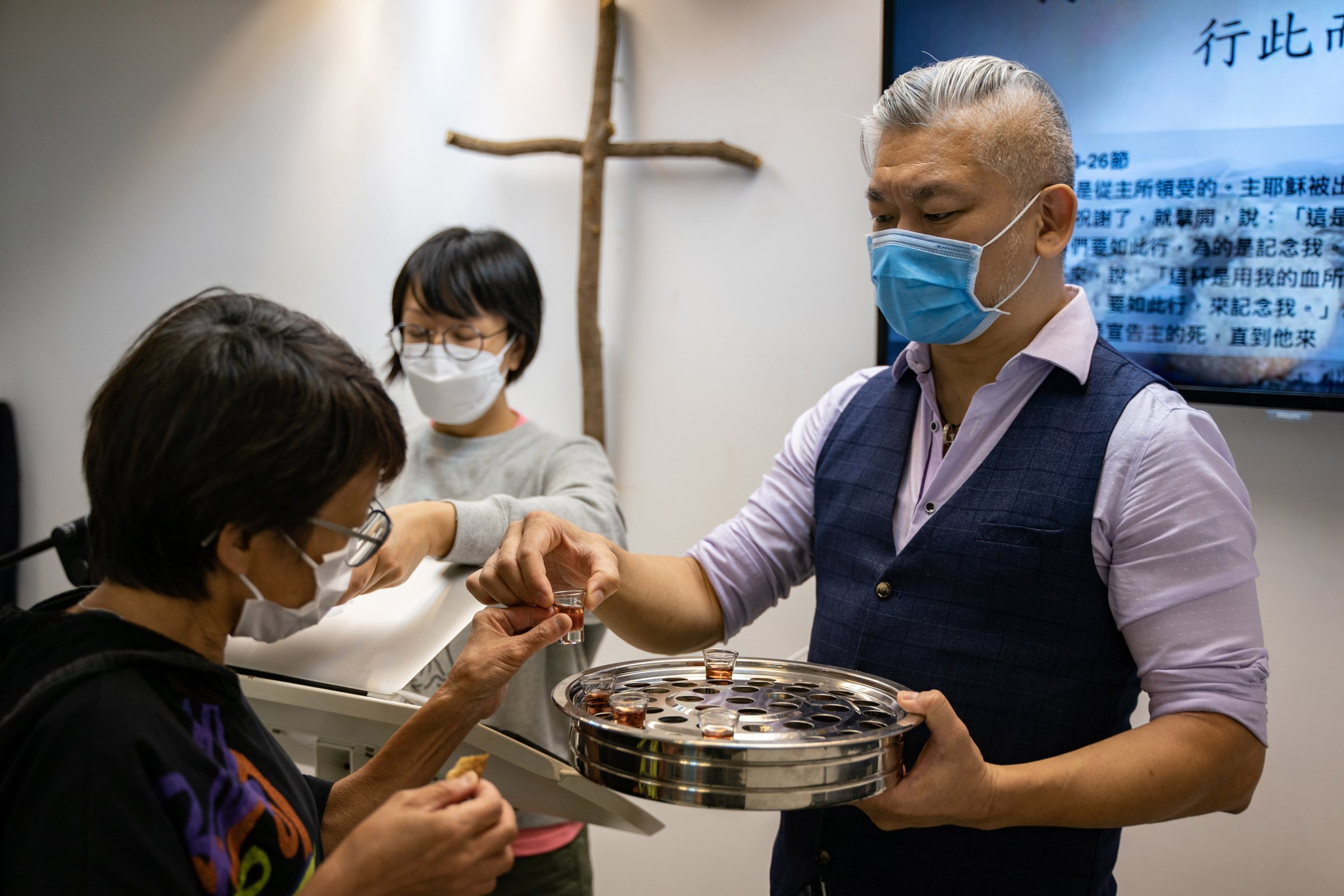 Pastor Shou King-kong ministers to a small flock and predicts “mosquito-sized churches” will be the norm if China continues its crackdowns on Hong Kong’s larger church structures. “To continue to speak the truth and call out for social justice, to tell people what the Bible teaches and how the Christ taught us, shall be the greatest challenge we endeavor in this era,” Shou said. (Washington Post/Anthony Kwan) 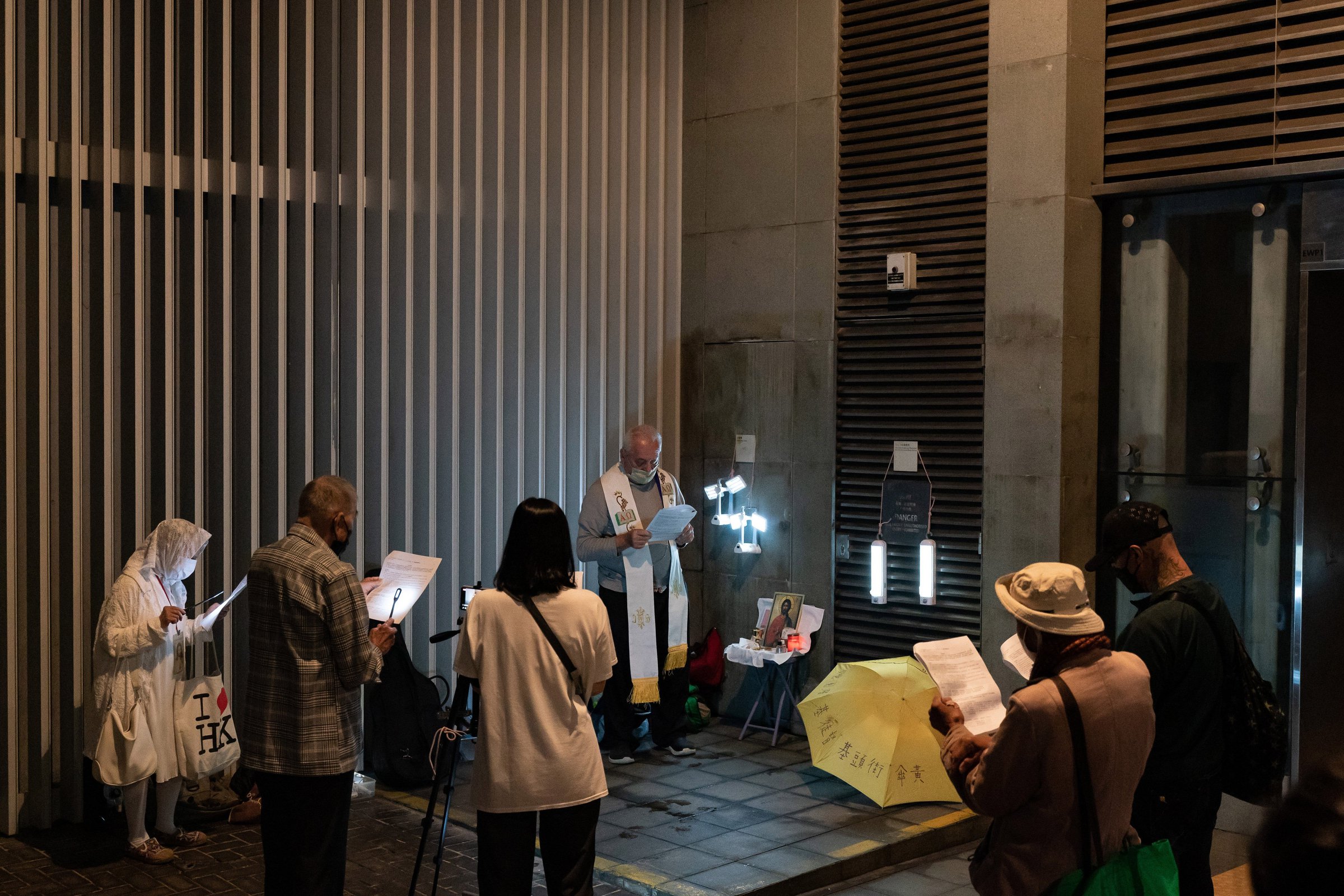 Father Franco Mella, a Catholic priest from Italy who has served in Hong Kong for decades, continues to minister there, despite increasing persecution from the Chinese government, including the recent arrest of 90-year-old Cardinal Joseph Zen. “If you can accept uncertainty,” Mella said, “you won’t fear.” (Washington Post/Anthony Kwan)