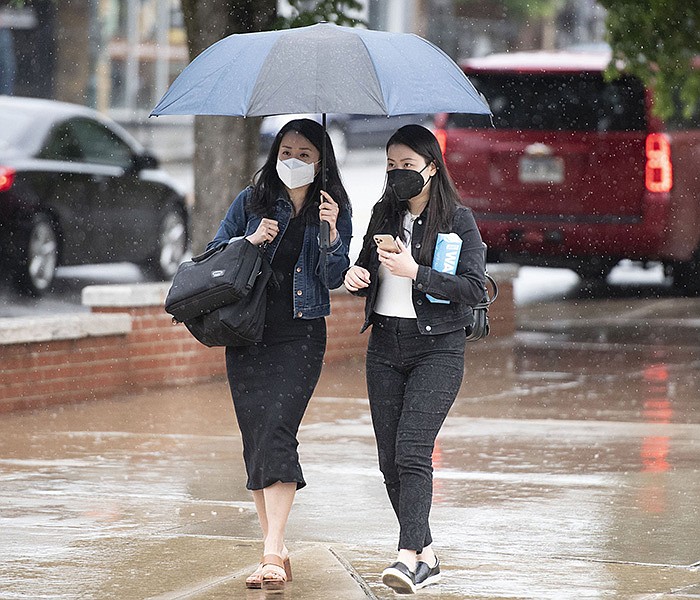 Pedestrians share an umbrella Monday May 23, 2022 as they walk along Dickson St. while rain falls in Fayetteville. The National Weather Service is calling for more rain early this week with high temperatures in the 60s. See nwaonline.com/220524Daily/ for daily galleries. (NWA Democrat-Gazette/J.T. Wampler)

Showers and thunderstorms will dump 3 to 4 inches of rain on central and southwest Arkansas through Thursday, possibly causing flash flooding in some areas, according to the National Weather Service in North Little Rock. One- to 3-inch amounts are expected across the rest of the state.

The ominous forecast prompted the Little Rock School District to postpone outdoor graduation ceremonies for Parkview and Central high schools that were scheduled for today at War Memorial Stadium.

"This decision is being made out of an abundance of caution due to the impending threat of severe weather, and following ongoing consultation with the National Weather Service and local forecasters," according to the school district.

Jeff Hood, a meteorologist with the National Weather Service, said the storms should be out of the state in time for a Thursday morning graduation ceremony, but a light rain could linger.

"The bulk of the rain is likely going to be east of the Mississippi River by 7 a.m. on Thursday," he said. "The heavy rain threat will be well east of the area by that time, but there could be a lingering threat of drizzle and light rain Thursday morning."

All ceremonies will be livestreamed on on the school district's YouTube Channel -- www.lrsdlive.com.

Flash flooding is possible and rivers will be on the rise, the Weather Service said in its Monday briefing.

The water level in those rivers had declined slightly since Thursday.

No other Arkansas rivers were at flood stage on Monday afternoon.

A light rain began midday Monday in Northwest Arkansas and a chance of rain was in the forecast through Wednesday night, but that region of the state was projected to receive less rain this week than central and southwest Arkansas.

Hood said the recent whiplash in weather temperatures is somewhat normal for spring in Arkansas.

On Saturday, high temperatures across the state were in the 80s and 90s, he said. After a cold front moved through that night, Sunday morning lows were in the upper 40s and 50s across much of Arkansas.