Early voting numbers up in Arkansas, but rain threatens to dampen total turnout 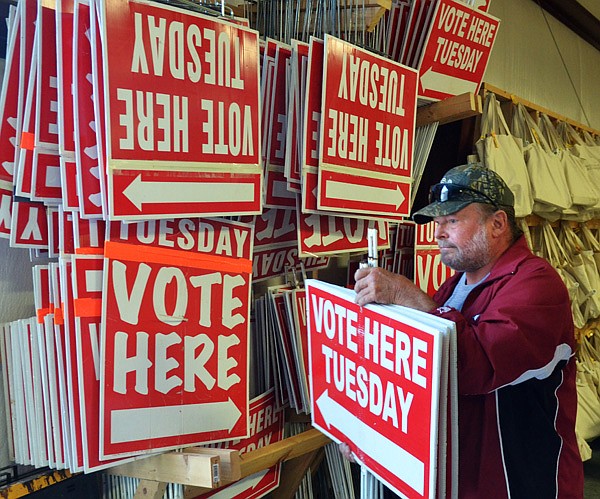 The number of early voters in this year's primary election substantially exceeded their ranks in the last midterm election in 2018, even though the final-day tally wasn't yet available late Monday afternoon.

But the prospect of a rain on Election Day today could dampen potential growth in overall voter turnout for the primary.

Early voting started May 9 and ended Monday at 5 p.m.

As of late Monday afternoon, the secretary of state office's records showed a total of 173,384 early voters, including 133,355 in the Republican primary, 38,327 in the Democratic primary and 1,702 others.

In the 2018 primary, the office's records reflected a total of 112,084 early voters, including 70,836 in the GOP primary, 39,464 in the Democratic primary, and 1,784 others, according to records provided by Josh Bridges, an election systems analyst in the secretary of state's office.

Republican Secretary of State John Thurston's office has projected that about 360,000, or about 20% of the state's 1.7 million registered voters, will cast ballots in the primary.

According to the secretary of state's website, that compares to the following turnouts in the state's primary in the previous three midterm elections:

The higher turnout in the 2010 primary election was attributed by election officials at the time to competitive primaries for the U.S. Senate seat then-held by Democrat Blanche Lincoln, and contested primaries for three of the state's four congressional seats.

In today's primary election, four Republicans and three Democrats are vying for their respective party's nomination for the U.S. Senate seat that Republican John Boozman of Rogers has held since 2011. Republicans also are challenging GOP incumbents in three of the state's four congressional districts.

In addition, five Democratic candidates and two Republican candidates seek their party's nomination for the governor's office in today's primary election. Republican Gov. Asa Hutchinson is barred from seeking re-election under the state's term limits amendment, and his successor will take over as the state's chief executive in January.

If no candidate in a primary election gets a majority of the votes, the two top voter-getters advance to a June 21 runoff election.

Election officials in several counties across the state said Monday afternoon that voter turnout in their counties was either close to or higher than what they predicted.

Lemons said that is higher than normal and far exceeds the numbers from 2020 and 2018 primaries. She said the voter age group with the highest turnout was 65 to 74, which was more than 7,000 early Monday afternoon.

Price said early voting numbers have been running "a little bit higher than what we expected to see," and attributed the higher turnout to a large number of contested primary races.

The region gained some legislative seats when the state Board of Apportionment approved new boundaries for legislative districts in November. The board comprises the governor, the attorney general and the secretary of state.

"This is the biggest election we've seen in regard to the ballot size, just, you know, simply the number of contested races on the precinct level," Price said.

"It's going great," said Caler, who projected a total turnout of about 20% in Benton County. "Turnout is fabulous."

Two state Supreme Court seats, currently held by Justices Karen Baker and Robin Wynne, are up for grabs in today's nonpartisan judicial election. If neither attorney David Sterling of Little Rock, District Judge Chris Carnahan of Conway nor Wynne gets a majority of the votes in today's election, the two top vote-getters will advance to the Nov. 8 general election.

Jennifer Clack, election coordinator for Craighead County, said voter turnout was steady Monday and reached about 10% in Craighead County. She predicted it would reach 20% after Election Day voting.

On Facebook, he reported Monday night that 11,329 votes were cast overall during early voting, and voter turnout is at 14.6%. Curtis said that outpaced his estimate of 8,700.

He and other election officials were hopeful for a strong election day turnout, but worried that could be dampened by storms in the forecast.

In Saline County, Shirley Naramore of Benton, who is retired, said she voted for Boozman in the Republican primary for the U.S. Senate.

"I just like him," she said of Boozman. "He looks country. I'm country. I trust him."

In Faulkner County, pharmacy technician Courtney Nippert of Conway said she voted for Boozman in the U.S. Senate primary, though she has grown irritated with the negative ads from Boozman and his allies and Bequette and his allies.

But some Republicans said they want to oust the Republican establishment out of office and elect Republican newcomers.

Brandi Roberts of Benton, an accountant, said she voted for Morgan in the GOP primary for the U.S. Senate.

Roberts declined to say whether she voted for podcaster Doc Washburn of Little Rock or Sanders in the Republican primary for governor.

Naramore said she voted for Sanders in the Republican primary for governor because she likes Sanders' father, former Republican Gov. Mike Huckabee, and she trusts Sanders, and admired her work as White House press secretary for Trump.

But they said they were excited to exercise their right to vote nonetheless.

"I'm an African-American male, so many of my ancestors fought for my right to vote," 28-year-old Jalin Wesley of Little Rock said. "If we continue to be silent, then we can't make a change."

Some voters in Little Rock said they were motivated to vote for anyone but Sanders for governor, and expressed support for Democratic gubernatorial candidate Chris Jones of Little Rock.

"Not Republican, you can quote me on that," 42-year-old Maumelle resident Tasha Nunerley said. "I don't think they represent any of my views."

Wesley said he felt like he knew enough about how Sanders would govern from when her father was governor, and didn't agree with his policies.

Mother and son Sandra and Ethan Marbaise were focused on the governor's race and are fans of Jones.

Sandra Marbaise of Little Rock said she felt it was important for Democrats to let their voices be heard in the Republican-dominated state. Ethan Marbaise, a University of Central Arkansas student, praised Jones' "PB&J" agenda, which includes prioritizing preschool, broadband and jobs.

"I feel like that brings younger people to the table as well as older people," he said.

CORRECTION: A previous version of this story misstated the hours polls are open. They are open 7:30 a.m. to 7:30 p.m.