‘End of an era’: Greyhound racing in Arkansas to end after 66-year run 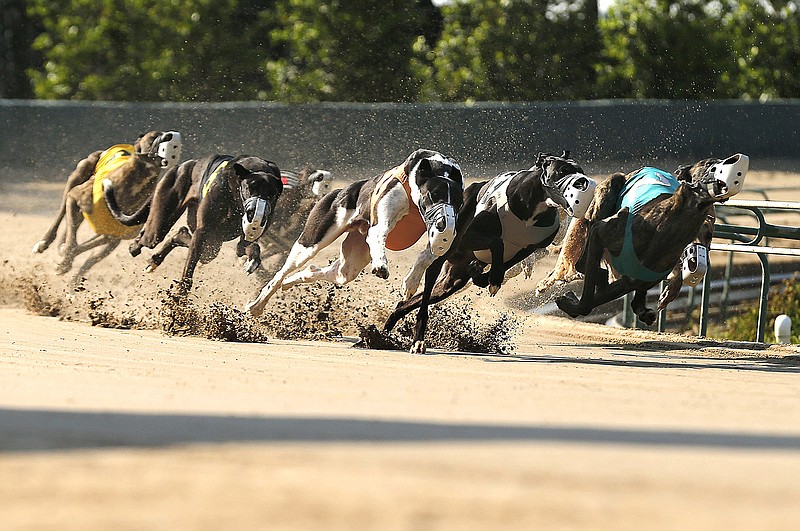 Greyhounds race out of a turn on Monday, May 9, 2022, at Southland Casino Racing in West Memphis. More photos at www.arkansasonline.com/515southland/ (Arkansas Democrat-Gazette/Thomas Metthe)

WEST MEMPHIS -- It's the end of an era -- not just for West Memphis, where greyhound racing began more than 100 years ago on dirt tracks at local farms -- but also for the state and region.

At the end of the year, hundreds of the narrow-headed, long-nosed dogs will stop chasing a mechanical rabbit around the Southland Casino Racing track as they have since 1956.

It's the end of an era for the fans who once packed the now nearly empty West Memphis stands to bet on their favorites.

And it's the end of an era for the kennel owners who have bred and trained the dogs for generations.

"It's going to be a little surreal because I've not known anything in my working life different, but the dogs," Shane Bolender, racing director at Southland, said. "You think you've seen just about everything, but every once in a while something new pops up. You get dogs that have unique personalities, you have favorites and you see dogs you didn't think would be worth anything, but then they turn out to be superstars."

Three years ago, Southland Casino Racing and the Arkansas Greyhound Kennel Association reached a pact to gradually phase out live greyhound racing at the West Memphis track by Dec. 31.

The move follows a national trend, brought about by the cries of animal-welfare advocates and dwindling bettors who have drifted away from the sport.

Southland is also the beneficiary, along with Oaklawn in Hot Springs, of a constitutional amendment that allowed the two racetracks to build and operate full-fledged casinos.

Nationally, betting on greyhounds has plunged from $3.5 billion in 1991 to about $500 million as the majority of racetracks have closed, according to The Associated Press.

The sport ended last year in Florida after voters approved a ban in 2018. At the end of this month, Iowa's last dog track will cease operations, leaving Arkansas and West Virginia as the only two states with dog racing.

"It has continued to shrink over the years. The greyhounds appeal to an older clientele," Dave Wolf, president and general manager of Southland Casino Racing, said. "There's really no new blood. They're gravitating to other forms of gambling, like casinos, sportsbook and other things. Quicker things. Those folks are moving on and nobody's replacing them."

Over the three-year phase-out, the West Memphis track has gone from 110 races per week to about 54.

"We're pretty flat until after Labor Day and then we'll drop another 10 races or so," Bolender said. "That's how we'll finish out the year."

With their day job phasing out, well over 1,000 greyhounds were put up for adoption by Southland. The demand was so great that the waiting list is now about three to six months out.

"Our adoption group here that works with us have been looking all around the country to find dogs because we just weren't kicking enough out fast enough," Bolender said.

As the dogs retire, their owners release ownership to the Southland adoption group, Mid-South Greyhound Adoption Option, which vets the dog -- including spaying or neutering, teeth cleaning and a complete health check -- before matching an adoptive owner to the pet.

A goody bag is also included once the adoption is finalized.

"It's fun to watch," Bolender said. "They form a cult of greyhound adopters. They go to meets together. They're not going to be the biggest group out there, but they're pretty loyal and they love these dogs."

The greyhound breed, with its muscular, streamlined body, can reach speeds of about 45 mph. The average greyhound stands about 27 inches and weighs about 70 pounds. They have higher red blood cell counts than other dogs, giving the breed an athletic advantage because it boosts the oxygen-carrying capacity of their blood. The greyhound's heart is also larger than most breeds.

Because of their genetic characteristics, a misconception exists that the dogs are hyperactive as pets, Bolender said, calling the dogs "big couch potatoes."

"The younger ones tend to be a little more hyper and full of energy and the older ones sit around all day and do nothing," Bolender said. "I've got an almost 5-year-old now and 80% of his time is either on some bed or couch in the house. But for a minute to a minute-and-a-half every five hours, he feels spry enough to throw toys around and do a couple of laps in the yard and then he's done."

Bolender adopted his greyhound, "Arkie Bear," last year after he and his daughter watched the dog throughout his racing career.

Greg Steed of Little Rock has adopted greyhounds from the West Memphis track since 1996. He grew up listening to his grandfather's tales of dog racing.

Steed's first job out of college was selling insurance, which landed him at Southland one day. He visited the adoption kennels and came home with a greyhound that same day.

"We've had five total since then," Steed said, adding that all but one have since died from age-related ailments. The average lifespan for a greyhound is 10-12 years.

Wally, who is registered as "Flying Mercenary," is 10 years old.

"They're super relaxed and super chill most of the time," Steed said. "They're big couch potatoes with no personal space. They're like a big cat that runs 45 miles per hour."

The greyhounds are patient around children, as well, Steed said.

"We have a 2½-year-old grandson who crawls all over this dog," he said.

Steed and his wife, Shannon, have worked with the track over the years to help with adoptions, coordinating meet-and-greet events.

The greyhounds are tested around small dogs and cats before being adopted because of their high prey drive. Steed said he's never had a problem and he's raised the greyhounds alongside other small dogs, cats and, yes, even rabbits.

"A fenced-in backyard is highly recommended. It's not 100% required or necessary, though," Steed said. "You have to keep them on a leash at all times. They can go zero to 45 in six strides. They're a rocket on a leash."

His heart aches thinking of the end of greyhound racing, Steed said.

"There are generations of dog owners there. People have lost their livelihoods," he said. "There's so much history and time behind it. I knew it was inevitable."

When it opened in 1956, it was known as Southland Greyhound Park. It was the only gambling venue in the Mid-South and drew crowds from all over the nation.

"Casinos weren't thought of as anywhere except Vegas back then," Bolender said. "You had to go to Florida to get to the other greyhound tracks. That was the nearest legal gambling at that period of time."

Originally, the only form of gambling allowed in the state was lotteries, according to the Encyclopedia of Arkansas. Horse racing in Hot Springs squeaked through as the result of a lack of definition in the law only to be halted in 1907 by an anti-gambling movement before opening and closing a few more times.

It wasn't until 1935, when former Gov. Junius Futrell signed Act 46 of 1935 to legalize pari-mutuel betting -- where bettors on the top three horses divide the money wagered by nonwinning gamblers -- that the track was allowed to legally operate.

Before the formal legalization of greyhound racing in the state in 1956, there were "gray greyhound" tracks at different spots in the area, whether by an old bridge or on farmsteads.

"It was kind of a pun in the 1940s," Bolender said. "They didn't know what to do with the current law. It didn't specify that greyhounds were illegal, but it didn't say that they weren't either. It was a gray area."

There were kennels on Southland's property since its inception, but there were also areas where Arkansas breeders could race from their homes.

"In the 1980s, they would have these inspectors go out to the farms, but it was getting more difficult to do that as more farms popped up," Bolender said. "The best way to regulate it was to make sure that everybody was in one spot. Then, it became where you had to be kept here in order to race here."

In 2005, Act 1151 was passed, allowing residents of counties where horse or greyhound racing parks are located to vote whether to allow the venues to add electronic games of skill.

Amendment 100, approved by voters in 2018, authorized the expansion of gambling operations at racetracks in Hot Springs and West Memphis into full-fledged casinos. (It also allowed the Arkansas Racing Commission to issue one casino license each in Jefferson and Pope counties.)

Moving away from the dying sport of greyhound racing, Southland Casino Racing is nearing completion of its $250 million expansion begun about three years ago.

The racing deck remains on the far east side, a mostly empty area now with a few sporting events blaring from a wall of televisions. The area is dwarfed in size and activity by the massive casino complex that now boasts 2,400 slot machines, 50 live table games and a covered 1,400-space parking garage. Steakhouses, coffee shops and bars abound.

Sports betting launched in fall of 2020.

The roar of construction equipment greets guests outside as the casino's new 300-room, 21-story high-rise hotel is being raised.

"Our hotel will open in part at the end of June or beginning of July," Wolf said. "Construction continues on. Hopefully, the whole thing will be open by September."

"Our competition is Tunica [Miss.]. A lot of our customers, they split their visits between here and there," Wolf said. "Now they're saying, 'I don't know if I'll be going to Tunica anymore.'"

Southland plans to continue offering simulcasts, allowing bettors to wager on dog and horse races at tracks in other states.

While he mourns the end of an era and the loss of the greyhounds, Wolf said the casino is where the revenue is. 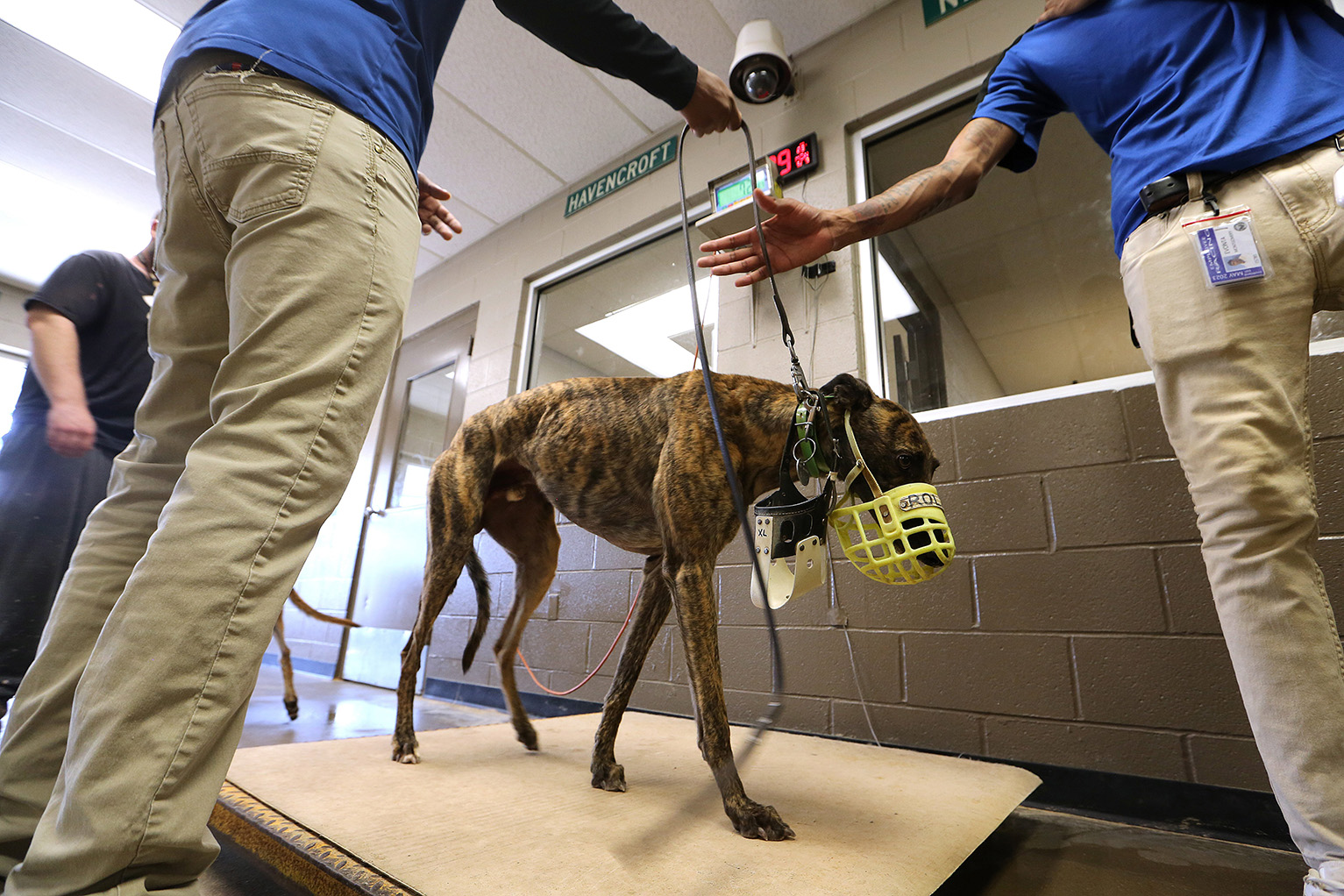 A greyhound is weighed in before the races on Monday, May 9, 2022, at Southland Casino Racing in West Memphis. More photos at www.arkansasonline.com/515southland/ (Arkansas Democrat-Gazette/Thomas Metthe)