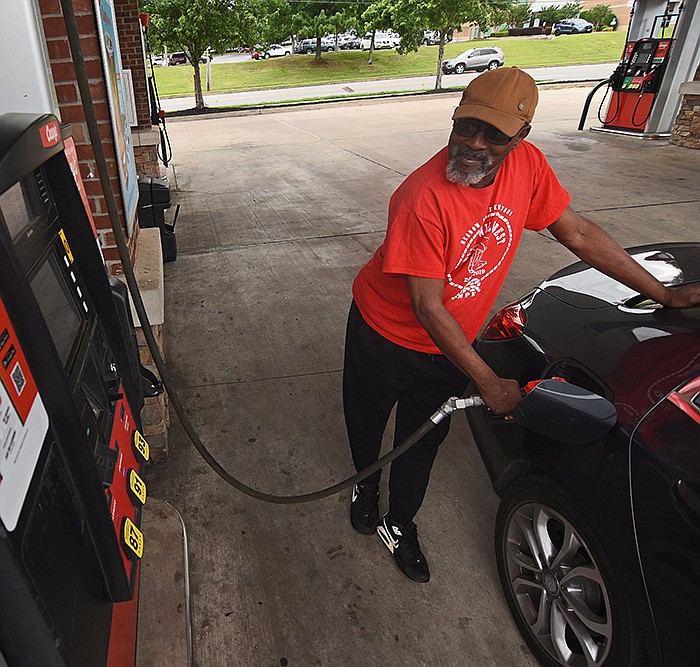 Cedrick McNair of North Little Rock fills up Thursday at the Casey’s store in North Little Rock. Gas prices in Arkansas have increased 39% from a year ago, when regular gasoline was generally going for $2.76 a gallon. (Arkansas Democrat-Gazette/Staci Vandagriff)

Arkansans will be paying some of the lowest prices for a gallon of gasoline in the country ahead of Memorial Day weekend, though prices are still significantly higher than a year ago.

Motorists can expect to pay around $4.11 a gallon for fuel at the pump today in Arkansas, according to the AAA Arkansas Weekend Gas Watch.

"On average, it would seem that Arkansas prices are about 40 cents lower than the national average, recently anyway," said Michael Pakko, chief economist and state economic forecaster for the University of Arkansas at Little Rock.

After 10 consecutive days of record-setting high prices, the statewide average price for gas declined by a penny.

"Gas prices have been fluctuating really over the past month or so, and that's sort of the trend we're expecting to see continue in the near future, talking about the next couple of weeks and even throughout the summer travel season," AAA spokesperson Nick Chabarria said.

Chabarria said gasoline prices have been rising since the start of 2022, but jumped significantly after Russia's invasion of Ukraine in late February, which sent the oil market into a scramble and resulted in a lot of uncertainty about the oil supply, which led to significant price increases.

"We've seen countries like the U.S. self-impose Russian oil import bans, so that of course impacted oil supply as well," Chabarria said. "It was a really a catalyst, with the Russian invasion in Ukraine, that sort of exacerbated already rising prices for oil and gas."

Gasoline prices were extremely low in April of 2020 during the covid-19 recession but rebounded as the economy improved, Pakko said. "That kind of got us back to where we were before, but we have seen the unrest in Ukraine, which created uncertainty and kind of adds to the price volatility and adds to the average prices," he said.

"That's quite a significant jump, especially with the way gas prices were trending, they were already heading upwards," Chabarria said.

Gas prices in Arkansas have increased 39% from a year ago, when regular gasoline was priced at $2.76 a gallon.

Arkansas drivers are nonetheless paying the third-lowest gas price average in the country while the national average price for regular unleaded gas is $4.60. California drivers are paying the most, an average of $6.07 per gallon.

Rising gasoline prices are a cause for concern for some local businesses, particularly HVAC repair companies, which send out heavy duty trucks to perform service work on heating and cooling systems at residences and businesses.

Family-owned Central Arkansas business DASH Heating & Cooling touts itself as the oldest heating and air conditioning company in the state, in operation for the past 91 years.

But even a local business with nearly a century of staying power faces challenges operating today amid high gas prices.

Some of the business's big box trucks get around nine miles to the gallon, President Keith Wortsmith said.

"They have to be big enough to carry larger loads ... and they are not built for efficiency, they are built for having the parts, pieces and materials you need plus the equipment, and it just takes a lot of room," he said.

Wortsmith said his fuel costs are up 44% to date this year.

The business is finding ways to minimize the impact of rising costs on its clients.

"We're really focused on proper scheduling and trying to keep vehicles in certain common areas," he said. For maintenance requests, as an example, the business can call customers and let them know they will be in their area to reduce unnecessary trips and save on gas.

AAA anticipates 4.1 million people will travel between May 26 and May 30 for Memorial Day weekend despite record high gas prices, an 8% increase over the number of Memorial Day travelers a year ago.

An expected 3.7 million of those travelers will take road trips in states like Arkansas, Oklahoma, Texas and Louisiana.

"Pain at the pump continues as crude oil remains elevated above $110 per barrel with no signs of dropping in time to impact pump prices over the holiday weekend," Chabarria said in a news release Thursday.

"Even with higher prices, drivers should expect roads to be busy this weekend and make sure they leave plenty of time to get where they are going safely."