Surveys claiming mosques as Hindu holy sites spark tension in India by Niha Masih The Washington Post | May 28, 2022 at 3:13 a.m. 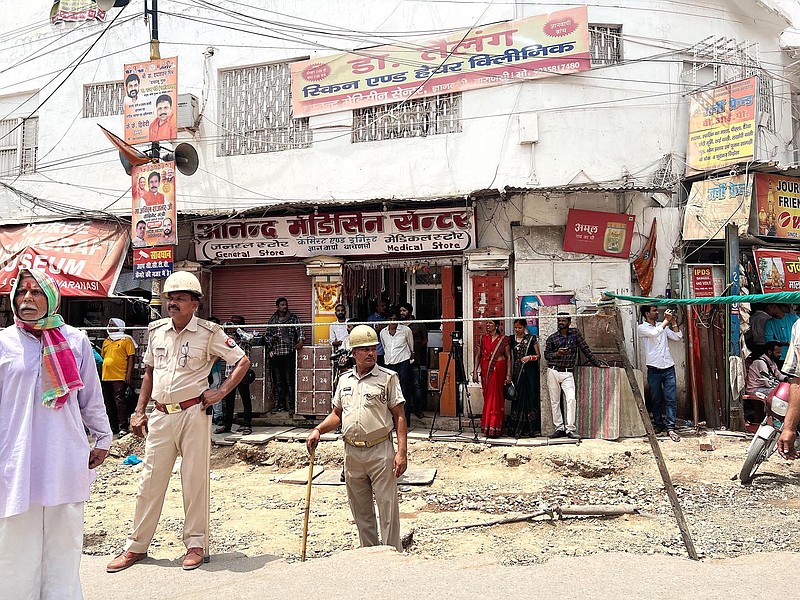 In India, onlookers stare at the heavily guarded Gyanvapi mosque site, which has emerged as the latest flash point for Hindu nationalists who claim it as a temple. (Washington Post/Niha Masih)

VARANASI, India -- On a sweltering Friday afternoon last week, outside an imposing sandstone gate leading to the Gyanvapi mosque, the road teemed with dozens of policemen, some armed with tear gas. There were swarms of television cameras and reporters thrust mics in the faces of prayergoers.

The 17th-century mosque in Varanasi, Hinduism's holiest city, has emerged as the latest flash point in the escalating struggle between India's Hindu nationalists and its Muslim minority. After a controversial court survey claimed to find the relic of a Hindu deity on its premises, the area was sealed by the court and large prayer gatherings were banned.

For decades, Hindu nationalists have laid claim to several high-profile mosques, arguing they were originally Hindu temples, or holy sites desecrated by Muslim emperors hundreds of years ago. Their demands, which Muslims see as an attempt to erase their history from the country, have gained traction under Prime Minister Narendra Modi's government.

"This is all a political ploy," said Ateeq Ansari, a 66-year-old businessman who has prayed at the mosque for decades. "The beauty of this country -- its diversity -- is now being tarnished."

The efforts to reclaim Muslim places of worship aren't primarily about litigating the past, experts say. "For Hindu nationalists, there is no place for Muslims in India's future except as oppressed, second-class citizens whose rights are routinely denied," said Audrey Truschke, a professor of South Asian history at Rutgers University.

The new legal momentum in the Gyanvapi case has led to fears of street violence, like the kind that engulfed the country 30 years ago after a Hindu mob razed a 16th-century mosque in the city of Ayodhya. In the riots that followed, 2,000 people were killed.

It was the movement against the mosque in Ayodhya that catapulted Modi's Bharatiya Janata Party, or the BJP, onto the national political stage in the early 1990s. Now, a grand temple is being built at the disputed site, which Hindus believe to be the birthplace of the god Ram.

Vinod Bansal, a spokesperson for the Vishwa Hindu Parishad, an affiliate of the ruling party, said the recent relic discovery confirmed that the Gyanvapi mosque is a temple.

"Truth has come out. Arrangements should be made for Hindus to pray there," Bansal said. Those who still believe it to be a mosque, he said, were either "Islamic jihadi forces" or "the secular brigade," a term used pejoratively by Hindu nationalists for liberals who champion India's secular ideals.

The ruling in Varanasi set off a spate of similar petitions across the country laying claim to other historic and religious sites built by Muslim rulers. Even the Taj Mahal -- the white-marbled mausoleum built by a Mughal emperor as a monument of love for his queen, and India's most popular tourist destination -- has not been spared.

While it is widely believed that a temple once stood at the site of the Gyanvapi mosque, some historians have argued that political expansion rather than religious bigotry was often behind temple demolitions by Muslim rulers. They note that Hindu kings also targeted places of worship, including temples. And they take issue with the notion that India's past can be reduced to a glorious Hindu period followed by centuries of Muslim tyranny.

The Hindu nationalist view of history is "extremely prejudiced and totally motivated by the desire to inculcate blind pride in oneself and blind hatred of the other," said Tanika Sarkar, a historian who taught at New Delhi's Jawaharlal Nehru University.

She feared the latest case was likely to "lead to a great deal of violence against ordinary Muslims."

The Gyanvapi mosque, with its white domes and minarets, rises out of a dense neighborhood in Varanasi next to the gold-spired Kashi Vishwanath temple, dedicated to the Hindu god Shiva. Here, in one of India's most ancient cities, mosque and temple stand side-by-side -- monuments to diverse communities that have coexisted for centuries.

The site sits at the heart of a Modi-backed redevelopment project. A labyrinth of houses, small temples and shops around the neighborhood were demolished in recent years to build a commanding sandstone complex connecting the temple to the nearby riverfront.

The white paint on the mosque has blackened from neglect, and it remains caged behind 20-foot-tall metal fences. Police guard it around-the-clock and access is limited.

On a recent evening, as monkeys scampered between the two holy sites, barefoot Hindu devotees poured milk on an oval-shaped black stone, the symbol of Shiva, at the temple sanctum. The court survey claimed to have discovered a similar stone inside the mosque, in a pond where Muslims perform ablutions. Muslims argue the structure is a fountain and have asked for it to be examined by an expert.

But they fear they have already lost in the court of public opinion. Popular pro-government news channels broadcast the survey claims unchallenged.

As Muslim men streamed out of the mosque after Friday prayers, two middle-aged Hindu men stood watching by the roadside. One remarked that the mosque should be turned into a temple. The other nodded in agreement.

"The one in power is always right," one said, refusing to share his name.

For now, the top court has allowed prayer gatherings to continue at the mosque and directed a lower court to hear the Muslim petitioners. Experts expect a protracted legal battle, like that of the demolished Babri mosque, which was handed to Hindus in 2019 after years of litigation.

"If history is the prism, then how far will we go back in time, because this is an endless debate," said Ansari, the Muslim man in Varanasi. "Ultimately, Indians have to determine whether the road to development can be paved by digging up the past."

The Washington Post's Utpal Pathak in Varanasi contributed to this report.