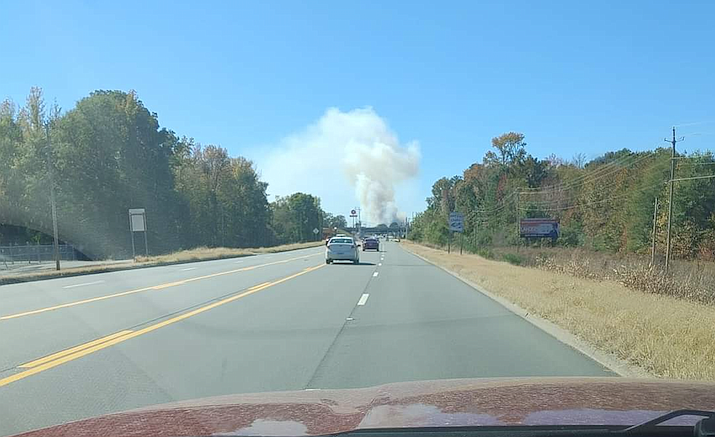 Wildfires in south Jefferson County last week could be seen from miles away. Because of the weekend rains, a burn ban has been lifted for at least a week. (Special to The Commercial/Sheri Flannery)

A soaking rain over the weekend was enough to lift a burn ban Jefferson County has been under for several weeks -- even if the reprieve is just for a few days.

County Judge Gerald Robinson said Monday that he had lifted the ban for seven days and would decide in a week whether to extend it.

"It's not permanent, so we can see how things go this week," Robinson said.

"I'm seeing that more rain is in the forecast so we can make a determination then as to whether to lift it for a longer time.

Much of the county received a little more than an inch of rain over the weekend, Robinson said, but it was the type of rain that was just as important.

"It was a saturating rain," Robinson said.

"That's what really led to lifting the ban.

The slow rain provided time for the ground and vegetation to become thoroughly saturated. That allowed us to lift the ban."

Last week, with temperatures in the 80s and several days of winds that gusted to 30 mph, illegal trash fires were set and got out of control in south Jefferson County.

In the end, two separate fires burned more than 800 acres and drew in fire departments and crews from a variety of sources, including the Forestry Division of the state Agriculture Department, which brought in fire-suppression planes.

As the crews fought the fires, at least twice, blazes were brought under control, only to be brought back to life and spread by the winds.

Robinson said the rains put those fires out once and for all.

"I can tell you, as a county judge, the weather in Arkansas is very unpredictable, and you have to adjust to whatever comes your way," Robinson said.

"You have to make good decisions on the spur of the moment, and we are able to do that because we have good people in key positions who know what they are doing."

One firefighter whose crews were in the thick of fighting the fires last week still advised extreme caution, even though the burn ban has been lifted.

"A county judge gets a lot of pressure from people wanting to clean up their yards.

But people need to be real mindful while they're burning. It's way too dry."

Tidwell advised those who start fires to stay with them at all times.

"I think lifting the ban for a few days is OK, as long as people do what they ought to do," Tidwell said.

"That means not leaving a fire unattended. People simply cannot be careless under these circumstances."