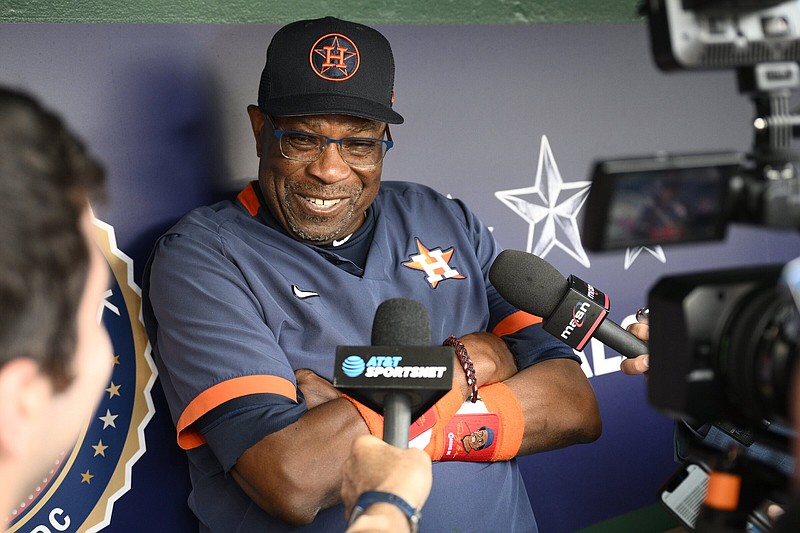 Houston Astros manager Dusty Baker Jr. talks with the media before a baseball game against the Washington Nationals, Friday, May 13, 2022, in Washington. (AP Photo/Nick Wass)

HOUSTON-- Dusty Baker has been here before.

It's hard not to think of the last time the Houston Astros' manager was up 3-2 in a World Series as he leads the team back to Houston tonight for Game 6 against the Philadelphia Phillies needing just one win for a championship.

In 2002, Baker's San Francisco Giants and Barry Bonds entered Game 6 against the Anaheim Angels up by the same margin. As the road team for the last two games of that series, the Giants squandered a five-run lead in a 6-5 loss in the sixth game before the Angels won the title with a 4-1 victory in Game 7.

Now, 20 years later in his third trip to the World Series, Baker is still looking for that elusive championship after a quarter-century as a major league manager. As a player, he went three times with the Los Angeles Dodgers, winning it all as a big-hitting left fielder in 1981.

"I don't think about the situation I'm in," Baker said of chasing the title. "Just taking a day of rest, because [if] you think about something all the time, it would drive you crazy."

With A.J. Hinch as manager, the Astros also led the World Series 3-2 in 2019 against the Washington Nationals and lost in seven games.

Baker, 73, whose contract expires at the end of the postseason, also insisted that he hasn't spent any time worrying about his future either.

"I've just learned over a period of time that, hey, you just live your life, try to do the right things, seize the moment and enjoy as much as you can," he said. "Enjoy this ride ... I always thought, hey, when I'm supposed to win, I'm going to win. And when I'm supposed to sign a contract, I'll sign a contract. But in the meantime, I'm just going to go out there and enjoy what I have been doing for a long time."

The Astros took a lead in the series by winning the past two games. Cristian Javier and three relievers combined for the second no-hitter in World Series history in Game 4 before Justin Verlander finally got his first World Series win in Game 5, thanks to a clutch homer by rookie Jeremy Pena and a terrific ninth-inning catch by Chas McCormick.

Despite a two-game skid, Philadelphia Manager Rob Thomson said he isn't worried about his team. After all, this is the same squad, led by stars Bryce Harper and Kyle Schwarber, that overcame a 22-29 start to reach the postseason for the first time since 2011.

"We've played really good baseball," Thomson said. "I don't think there's any reason to panic. We've just got to keep doing what we're doing and concentrate on doing the little things. I always tell 'em, focus on the little things and big things will happen."

Houston will start left-hander Framber Valdez against Zack Wheeler tonight in a repeat of the Game 2 matchup the Astros won 5-2.

Wheeler is looking for a better performance tonight to allow the Phillies to force a Game 7 on Sunday night, where they could try for the franchise's third title and first since 2008.

"Just try to be a stopper and give our team one more chance after [tonight]," Wheeler said. "So [tonight's] a must-win and I'll take pride in that. Hopefully I can go out there and give us the best chance."

After facing the hostile crowds in Philadelphia for the past three games, Baker said he expects to enjoy home support that will be at full tilt as the Astros try to win their second World Series. Their only title came in 2017, a crown won in Los Angeles that was tarnished by a sign-stealing scandal that rocked baseball.

The last team to clinch a World Series at home was the 2013 Boston Red Sox. The Astros watched as the Nationals celebrated a title on their field in 2019 and again last season as the Atlanta Braves beat them in six games.

"It's going to be a great, great crowd," Baker said. "They're for us. The town's for us. Tickets are at a premium because all of a sudden now everybody wants tickets. We could probably hold a couple hundred thousand if we had room." 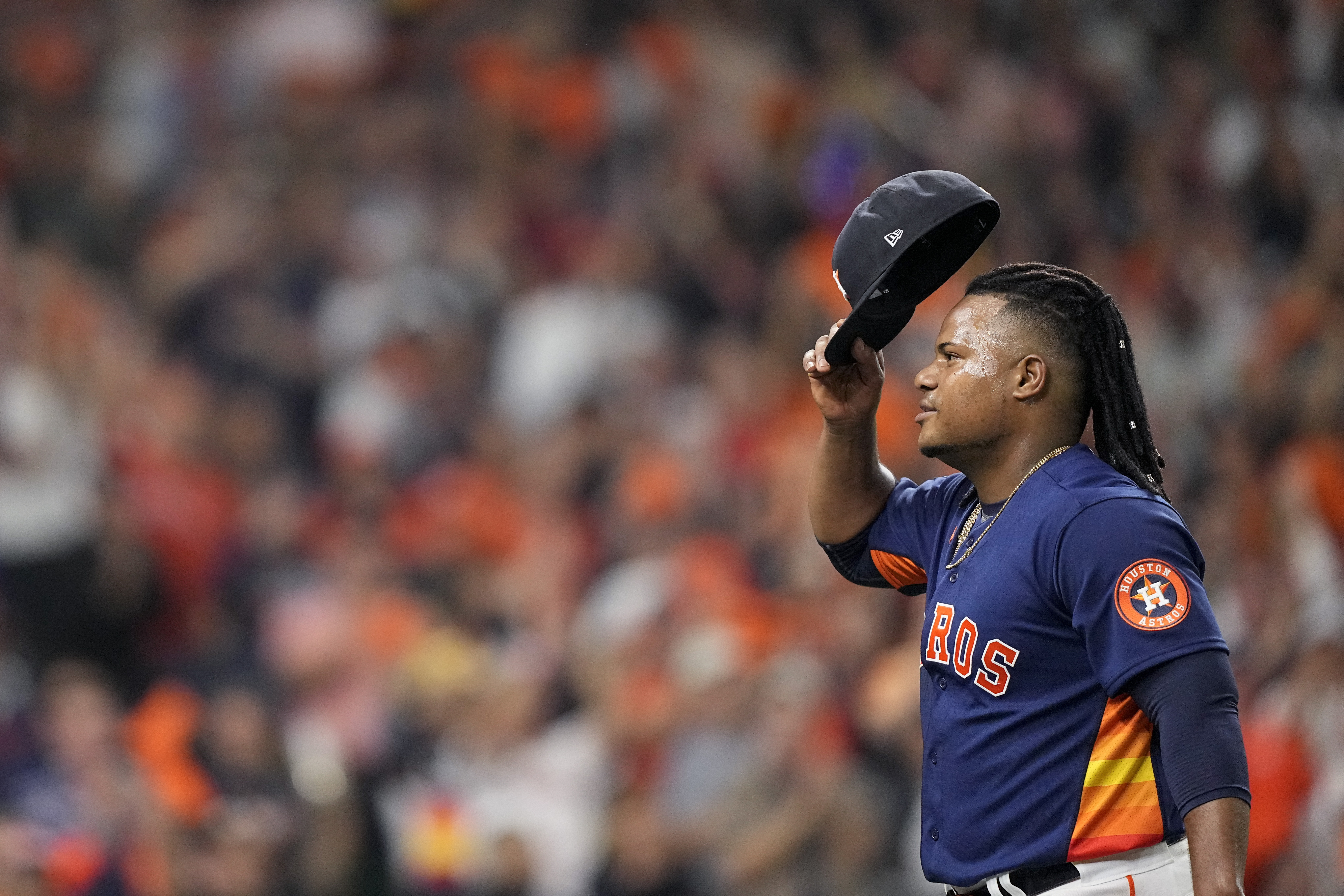 Houston Astros starting pitcher Framber Valdez tips his cap as he leaves the game during the seventh inning in Game 2 of baseball's World Series between the Houston Astros and the Philadelphia Phillies on Saturday, Oct. 29, 2022, in Houston. (AP Photo/David J. Phillip) 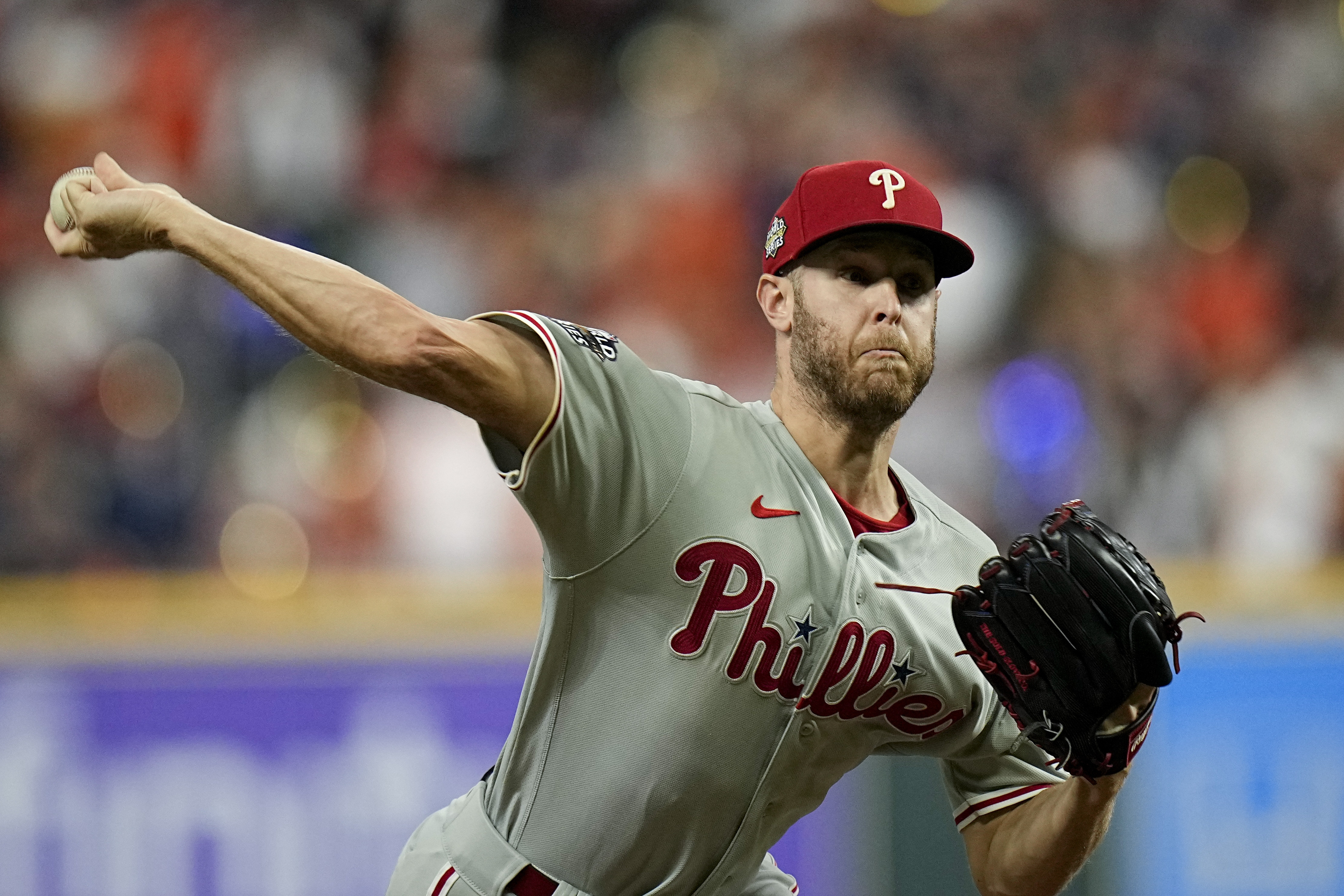 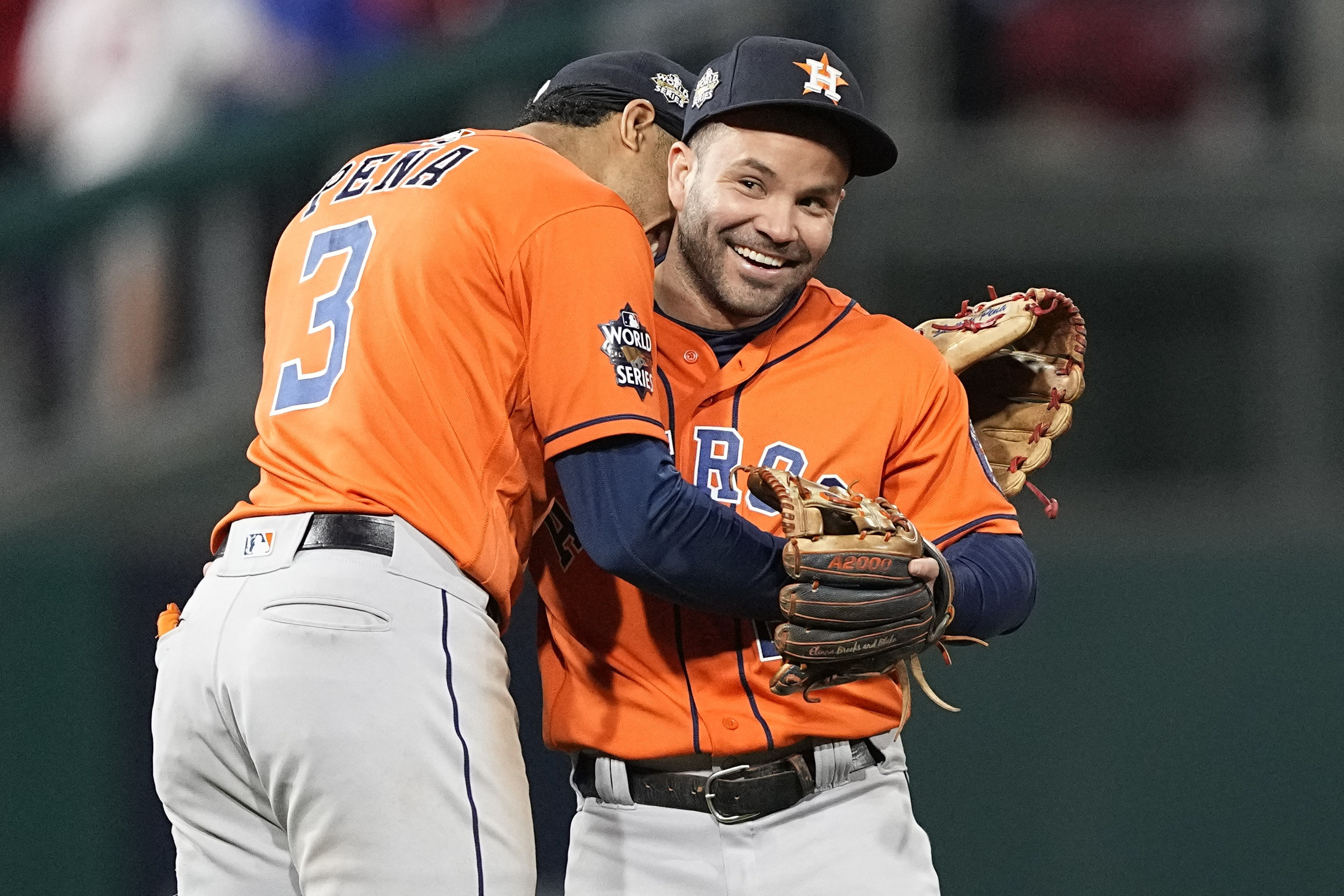 Houston Astros second baseman Jose Altuve and shortstop Jeremy Pena celebrate their win in Game 5 of baseball's World Series between the Houston Astros and the Philadelphia Phillies on Friday, Nov. 4, 2022, in Philadelphia. The Astros won 3-2, to take a one game lead in the best of seven series. (AP Photo/David J. Phillip) 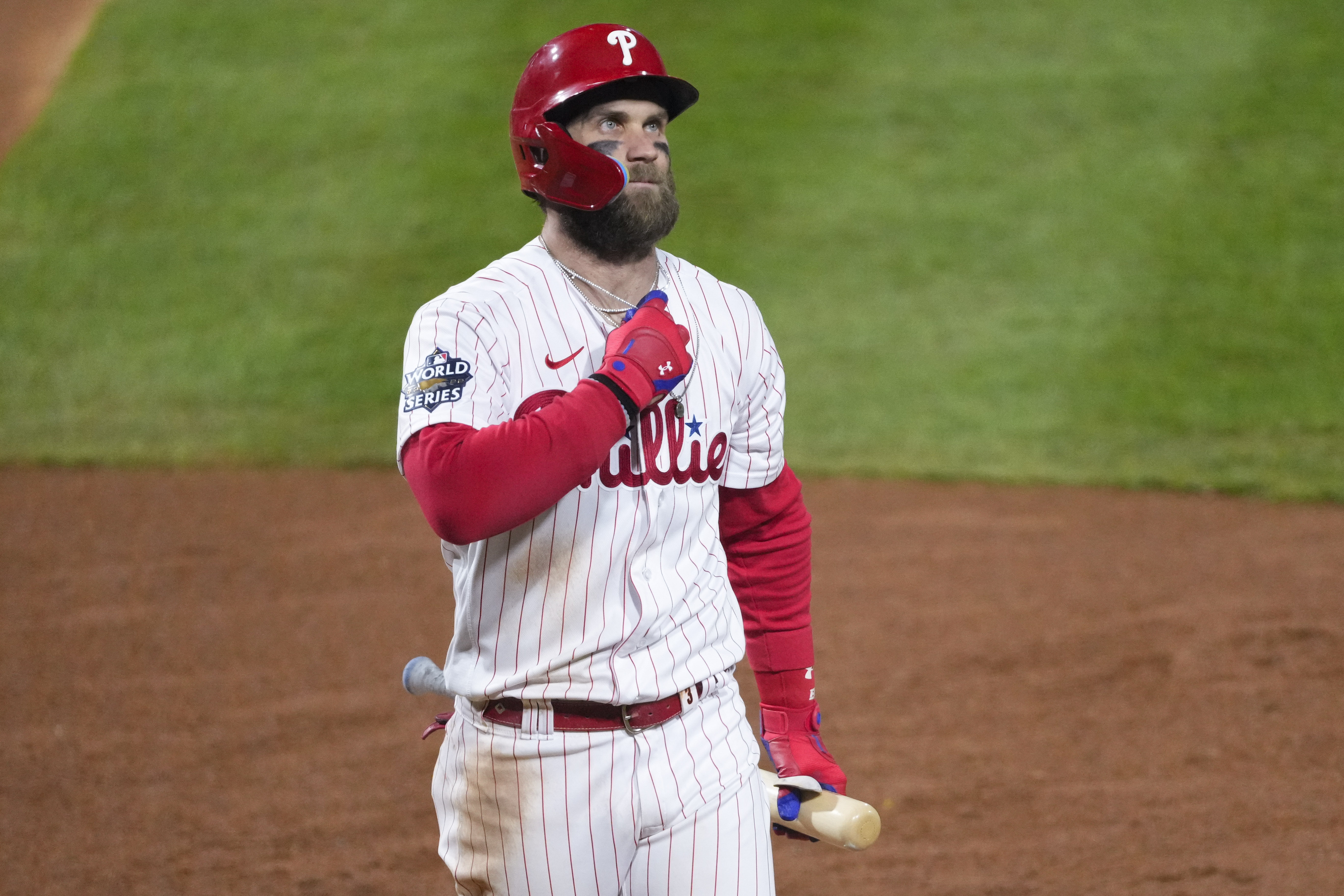