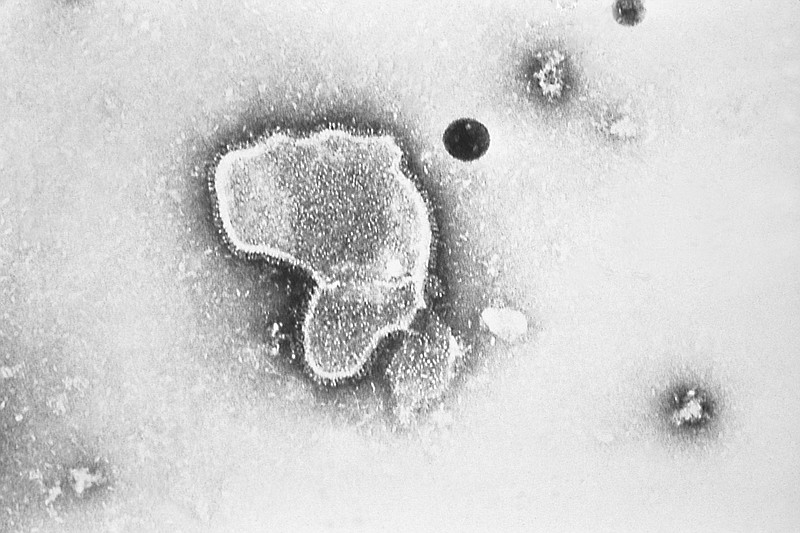 This 1981 photo provided by the Centers for Disease Control and Prevention (CDC) shows an electron micrograph of Respiratory Syncytial Virus, also known as RSV. Children's hospitals in parts of the country are seeing a distressing surge in RSV, a common respiratory illness that can cause severe breathing problems for babies. Cases fell dramatically two years ago as the pandemic shut down schools, day cares and businesses. Then, with restrictions easing, the summer of 2021 brought an alarming increase in what is normally a fall and winter virus. (CDC via AP)

LONDON -- The European Commission has authorized the world's first one-dose drug against a respiratory virus that sickens millions of babies and children globally every year.

In a statement Friday, drugmakers Sanofi and AstraZeneca announced that the European Commission greenlit nirsevimab, a laboratory-developed antibody designed to protect infants during their first exposure to RSV, or respiratory syncytial virus -- a highly contagious common infection that infects nearly all babies by age 2.

At the moment, babies at high risk of the disease can be given monthly shots to protect them during RSV season.

In September, the European Medicines Agency recommended that nirsevimab, sold as Beyfortus, be authorized based on advanced research that showed the drug reduced the chances that babies with RSV needed medical attention and appeared to be safe for infants. The drug is given in a single injection.

"We are excited about the opportunity to expand prevention efforts to all infants," said Silke Mader, co-founder of the European Foundation for the Care of Newborn Infants.

In the U.S., RSV is causing an early surge of infections in children's hospitals this year. European health officials are warning there could be a similar spike across the continent.

For most healthy people, RSV is a cold-like nuisance. But the virus can be life-threatening for the very young and the elderly. The virus can infect deep in the lungs and in small babies it can impede breathing by inflaming their tiny airways.

Nirsevimab was developed to give newborns and infants immediate protection against RSV through an antibody to prevent infections in their respiratory systems.

Earlier this week, Pfizer announced preliminary research showing that a new vaccine given to pregnant women could help protect their babies against RSV, after decades of failure to develop an effective shot.