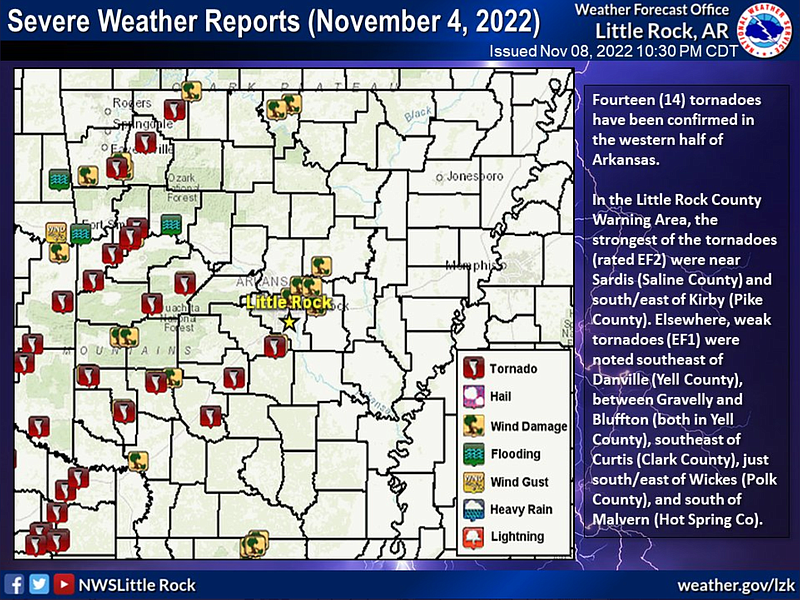 The severe weather that hit Arkansas on Friday included 14 tornadoes, according to the National Weather Service's North Little Rock office.

Most of the tornadoes were seen in the western and southwestern portions of Arkansas, according to a tweet from the office late Tuesday night.

Dennis Cavanaugh, a meteorologist with the weather service office based in North Little Rock, said Wednesday afternoon that the strongest tornado in the outbreak covered approximately 30 miles from Idabel, Okla., to Wickes in Arkansas' Polk County. The tornado was originally categorized as an EF4 due to some of the damage it did in Oklahoma, but by the time it arrived in Wickes, it had wound down to an EF2, he said.

“An EF2 tears the roof off of a well-built single family home,” Cavanaugh said. “Pretty much the only difference between an EF2 and an EF3 is whether or not the walls are still standing.”

The National Weather Service said that at least seven tornadoes were spawned in "the Little Rock County Warning Area," which includes 47 of the state's 75 counties.

“A tornado was confirmed just to the south and east of Sardis,” the service added in a report.

Cavanaugh said the tornado that was confirmed in Sardis in Saline County produced EF2 levels of damage as well.

“We saw roofs off homes and barns and other outbuildings completely destroyed,” he said. “With roofs gone, that rain could get in and cause even more damage.”

The report from the weather service said the debris from the damage was not prominently shown on the radar until the tornado was gone.

The 14 tornadoes were “the most tornadoes for the month since November 27, 2005," according to the National Weather Service report.

Cavanaugh said tornado outbreaks are more likely to occur in the spring, though fall tornadoes are not unheard of.

“It isn’t our peak season, but fall is our secondary severe weather season,” he said. “But those who’ve lived in Arkansas for at least five years know we can have severe weather anytime.”

Cavanaugh said that the National Weather Service's original forecast for that Friday was thunderstorms and damaging winds. But things changed on Friday morning, when officials launched a weather balloon.

“It was then we realized the conditions were much more likely to worsen to a more widespread severe weather event, and we were much more concerned about tornadoes,” Cavanaugh said.

The meteorologist said the tornadoes were hard to predict on imaging because the storms moved in a line instead of as isolated storms.

“We knew it was going to be messy. We had a lot of energy and wind,” he said. “Clusters or lines of storms can mask rotations.”

He said the weather service office in North Little Rock doubled staffing in order to have enough people to handle the tornado outbreak.

“Mainly we are grateful to the media, local emergency managers and first responders for helping us get that information out. And also those in the path of the storm who listened and took action. Warnings mean nothing without action,” Cavanaugh said. “We are on the same team, saying the same thing at the same time, and it saves lives.”

There were no fatalities in the state, he added.

“At the end of the day, we are a public safety organization, when we see that the warnings got to people in time and no one got hurt, we feel like we did a good job,” Cavanaugh said.