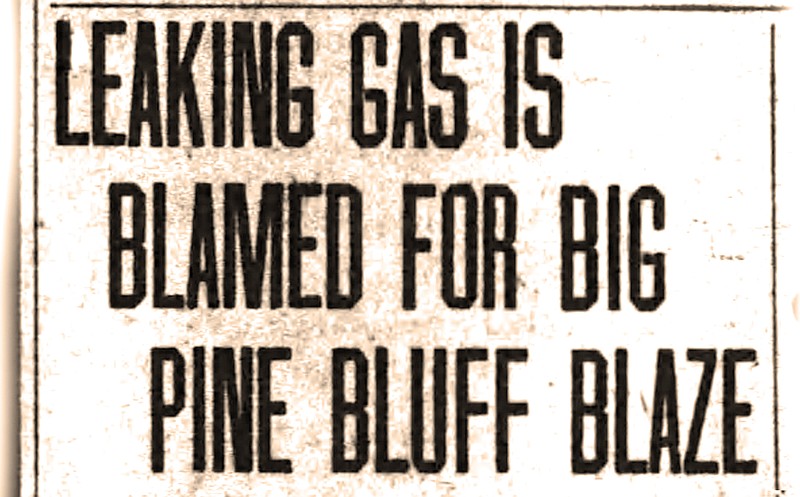 The long saga of efforts to restore and preserve Pine Bluff's melancholy Saenger Theater is well known, and so it won't amaze Friend Reader to read that today's still glorious ruin is not the original Saenger.

An earlier Saenger Theater burned on the same spot 100 years ago this week, oddly enough, during a renovation. That building was not built or even owned by the Saenger Amusement Corp. of New Orleans. Saenger had leased it.

I just read about this in the Nov. 12, 1922, editions of the Arkansas Gazette and Arkansas Democrat.

The building that burned on Nov. 11, 1922, at West Second Avenue and Pine Street was one of the city's oldest brick structures.

"It occupied a site many years ago occupied by a frame residence known as the Magnolia House," the Democrat reported. "The late Dr. J.F. Simmons purchased the property, and later erected a two-story brick building. This was occupied at one time by Blum dry goods store and later was the home of the Anderson Drug Company."

In 1912, O.C. Hauber sold his A-Muse-U theater to some other guys and leased the brick building from the Simmons estate. Then he converted it into his Hauber Theatre. He built a stage with a frame for moving pictures.

In 1917, the Gazette reported that he expected to be drafted into World War I and so had leased his Pine Bluff Hauber Theatre to someone named Rudolph Lewine for a price the Gazette said equalled his receipts from the past five years. Lewine brought in vaudeville acts until January 1918, when the Pine Bluff Daily Graphic reported that Lewine had surrendered his lease back to Hauber. Hauber eventually owned theaters at Camden and other Arkansas towns.

I'm not tremendously much thrilled by all this who-owned-it-when stuff, so -- to cut to the chase -- just know that meanwhile, the Pine Bluff Chamber of Commerce was trying to get Saenger to open a theater in Pine Bluff; months of negotiations led to Saenger leasing the former Hauber Theatre.

Saenger made the stage five times larger, a standard theater stage. The day of the fire, the Democrat reported that $30,000 in renovations had already been made, and manager Charles O'Donnell had just installed a $12,000 pipe organ. The road show season was to have been opened Nov. 18 with the musical comedy "Eve."

The fire started about 10:40 a.m., five minutes after O'Donnell left his office.

The Democrat reported: "The fire is supposed to have been caused by leaking gas in the balcony, where a lighted candle had been left near a meter, which had just been installed as a part of the improvements which have been under way for several months."

Carpenters working in the rear of the balcony escaped with their lives. They told the Democrat they saw a flash of flame, and immediately the building was full of smoke. "Frank Hancock, one of the carpenters who was working in the rear of the balcony, was among the last to get out of the building, and he said the fire was raging fiercely when he left."

The whole place went up, but firefighters were able to subdue it after only about two hours, and no one died.

The White Way barber shop in the corner of the building was quickly vacated. J.W. "Zeke" Carver told the Gazette he had sustained about $3,000 in damage -- not so much to his chairs, but all his other fixtures, supplies and accessories were gone.

Dr. Preston Castleberry, optician, whose office was just east of the theater entrance, removed much of his gear in time. His loss was about $500. And the Alexander & Lockwood Sporting Goods Co. at 118 W. Second Ave. was spared; but not before employees and friends pitched in to move the entire stock onto the sidewalk and from thence into neighboring stores.

The Gazette reported that "a modern theater building probably will be erected on the site of the burned structure. It is considered probable that arrangements will be made between the trustees of the Simmons estate and the Saenger Amusement Company."

A doozy of a playhouse arose from the ashes and in November 1924 opened to much fanfare. Today's grand old ruined Saenger, owned by the city of Pine Bluff, once seated 1,600 and hosted famous acts as well as birthday parties, recitals and graduations. Before its abandonment in 1975, stars from Houdini to Roy Rogers and Trigger had trod its boards in person.

The newspapers reported that during the Saenger fire fight, the Pine Bluff department responded to two other alarms in the city.

The home of Garland Brewster, 110 W. Harding Ave., suffered several thousand dollars in damage after an electrical short circuit caught the attic on fire. And the home of Mrs. Belle Loston, 512 E. Third Ave., combusted about 11:30 a.m. when a spark from a locomotive landed on the roof, which was dry and easily ignited. That fire was quickly extinguished and did little damage.

By the way, the Saenger fire was not the biggest headline in either paper on that long ago Nov. 12. It wasn't even on Page 1 in the Democrat, which lead with a banner headline about another conflagration: "North Little Rock Suffers $45,000 Fire Loss." The Cochran-Foster lumber company plant had burned up.

To give us an idea just how prevalent fires were, here's a little roundup of 133 significant ones recorded during the month of October 1922. Coincidentally, this item also appeared in the Nov. 12 Gazette:

"Seventeen cotton gins were burned in Arkansas during October, according to the monthly report issued yesterday by H.B. Savage, chief of the Arkansas Fire Prevention Bureau," the item began. "These fires, with others affecting cotton in warehouses and on platforms, caused more than half the month's losses, while residential properties came next, 33 houses being destroyed with an estimated loss of $110,900. Mercantile losses, approximating $100,000 for the month, came third."

Burned were those 33 dwellings and nine other dwellings that were merely damaged; 21 miscellaneous places; one apple evaporating plant and contents; one coal chute and 200 tons of coal; one sawmill, planer and cotton gin; one tent theater; eight mercantiles; 25 barns and contents; three cleaning and pressing plants; one hotel and mercantile at Camden; one railway depot; two garages and contents; five (5) school buildings; one church; one potato curing plant; and then all that cotton stuff mentioned above.

I like that list, and I also like its list of causes: spark on roof; spark from machinery; spark from locomotive in cotton; spark from sawmill; spark caused by friction; grease on stove; defective flues; lightning; open flame; supposed incendiarism; lighting cigarettes near gasoline; trash burning and carelessness with matches; cotton with smouldering fire from gin; match in cotton; fire originating in heating plant; explosion of kerosene lamp; trash pile at foot of stairway; defective furnace; leak in gas pipe; coal oil heating device; child playing with matches — and my favorite — jack-o'-lantern set too near the window curtain.

Gotta watch those jack-o'-lanterns, even today.