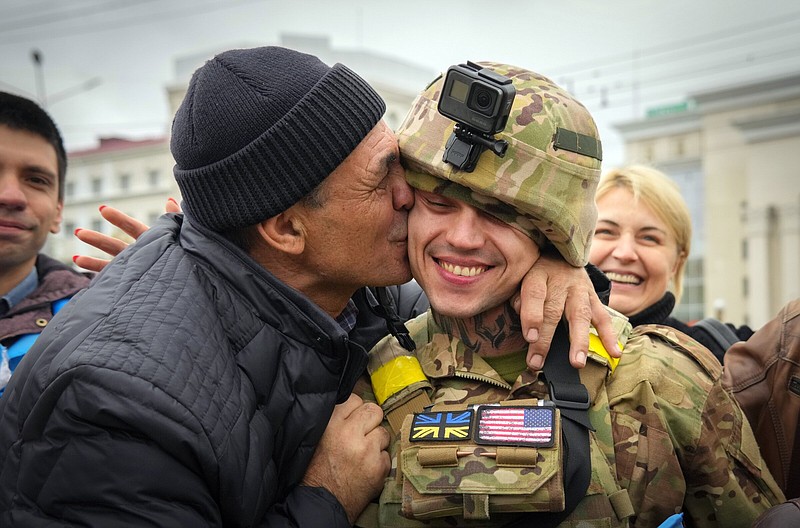 Ukrainian officials in Kherson, one of the first major cities to be captured in the Kremlin's full-scale invasion, were working to restore the area's infrastructure Sunday after Russian occupiers left the city "on the brink of a humanitarian crisis," according to an official who had spoken to residents there.

Kherson regional governor Yaroslav Yanushevych said cellular service was being restored in the area, though a Washington Post reporter there said none was available in the city. The head of the nation's postal service, Ukrposhta, said on television that the agency was working to reopen branches.

Kherson city remained dangerous, though. Running water was unavailable, explosives were left behind, a curfew was in effect and the regional administration warned that there was a high probability of shelling near the western bank of the Dnieper River.

Kherson residents do not have enough food and medical supplies, city official Roman Holovnia said in a television interview, according to Reuters. "There is currently not enough medicine, not enough bread because it can't be baked: there is no electricity," he said. Ukrainian President Volodymyr Zelenskyy said in his nightly address: "Before fleeing from Kherson, the occupiers destroyed all critical infrastructure -- communication, water supply, heat, electricity." But despite the lack of resources, residents were eager to return.

Zelenskyy warned residents returning to Kherson to avoid handling objects left behind by the Russians as bomb disposal teams have removed some 2,000 explosive devices in the Kherson region -- "mines, trip wires and unexploded ammunition." A Ukrainian soldier was injured Saturday while demining a Kherson administrative building, Zelenskyy said. Yanushevych posted a video in which he said Russians "have mined almost everything." He also called on people to avoid "crowded places." In another dispatch, he urged people to avoid the city center today so crews could clear explosives.

Moscow's loss of Kherson could spell trouble at home for Russian President Vladimir Putin, according to the Institute for the Study of War think tank. Russian troops' withdrawal from Kherson was "igniting an ideological fracture between pro-war figures and [Putin], eroding confidence in Putin's commitment and ability to deliver his war promises," which included "maximalist goals of overthrowing the Ukrainian government and seizing all of Ukraine," the institute said.

Putin introduced a new amendment to strip some Russians of their citizenship if they criticize the military over its war on Ukraine or call for Russia to leave the territories it illegally claimed to annex. If rubber-stamped by Russia's parliament, as is expected, the amendment would apply to Russians of foreign parentage who were granted citizenship. Those who question Russia's borders or criticize the war would lose their Russian passports even if they have no other citizenship.

Ukrainian forces are on the defensive in the eastern Donetsk region, Zelenskyy said. "It's just hell there," he added, describing the "extremely brutal battles" that Kyiv's troops are engaged in every day to prevent Russian forces from advancing further into the region, which Putin illegally claimed to annex in September. Maintaining the defense is crucial for allowing Ukraine to pursue offensive advances elsewhere, Zelenskyy said.

Six civilians were killed across Ukraine in fighting Saturday, an official in Zelenskyy's office, Kyrylo Tymoshenko, said Sunday morning in a Telegram post. The death toll includes four people who were killed in Donetsk and two in the Kherson region. Two more were wounded in the Dnipropetrovsk region, Tymoshenko added, without providing further details.

A Russian strike left an unexploded missile near six apartment buildings in Zaporizhzhia, Tymoshenko said. He shared a photo on his Telegram page and said the materiel was loaded with about 50 charges that could explode at any moment. As of Saturday evening, authorities were moving people out of the area and a bomb squad was working to dispose of it, Tymoshenko said.

Britain's armed forces chief expressed hesitancy in calling Kherson's liberation a "turning point," but said it was nonetheless a "significant" gain for Ukraine. "This is a messy, protracted conflict and the likelihood is that it is going to continue," Adm. Tony Radakin said in a BBC television interview.

More than 700,000 Russians have crossed into neighboring Georgia since the start of Russia's unpopular military mobilization efforts in September, Georgian President Salome Zurabishvili said. The vast majority of them traveled on to other countries like Turkey and Armenia, Zurabishvili told a French radio station, but about 100,000 are still in the country. She described Georgia's new Russian diaspora as educated, middle-class and intent on distancing themselves from Moscow's invasion.

Ukrainian Foreign Minister Dmytro Kuleba thanked Washington for its support during a meeting Saturday with Secretary of State Antony Blinken, who was in Cambodia with a U.S. delegation that includes President Joe Biden. "When we see Kherson residents greeting their liberators with tears of joy, we also feel grateful to the U.S.," Kuleba tweeted. Last week, the United States pledged an additional $400 million in security assistance for Ukraine. The latest U.S. aid package includes Avenger air defense systems that come equipped with Stinger missiles.

The liberation of Kherson does not change the United States' position against pushing Ukraine to negotiate, White House national security adviser Jake Sullivan said. Speaking aboard Air Force One en route from Cambodia to Bali, Sullivan said the United States maintains that "we're not going to pressure [Ukraine]; we're not going to dictate to [Ukraine]" whether or when to negotiate.