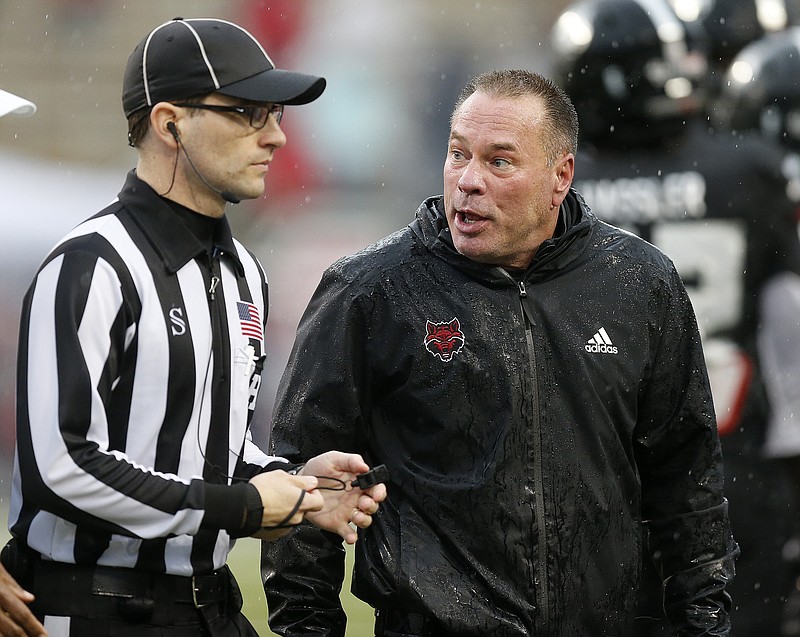 JONESBORO -- Even in victory, Arkansas State gave its coaching staff more than enough to nit-pick -- or perhaps, eviscerate -- when it came to offensive execution against Massachusetts.

They could pick from any of the numerous statistics that best illustrate the ugly picture the Red Wolves painted.

Massachusetts more than doubled the Red Wolves in time of possession, hanging onto the ball for 41:30 of the game's 60 minutes.

Of ASU's 12 drives -- excluding the two that ended the first and second halves -- the Red Wolves went three-and-out and punted seven times.

ASU went 0 for 8 on third downs against the Minutemen and is now 2-for-33 in its last three games combined.

"It's a lot easier to correct when you win," Coach Butch Jones said Saturday night.

The biggest weak point for the Red Wolves remains on the offensive line. Freshman Aleric Watson made his first collegiate start but lasted just a half at left tackle -- Makilan Thomas slide from right to left tackle at the start of the third quarter and Ernie Ramirez replaced Thomas on the line.

Watson wasn't the only one at fault, however. Massachusetts attacked ASU's offensive front from the left, right and center, with every player on the line seemingly responsible for either a sack, tackle for loss or hurry that led to an incompletion.

The Minutemen totaled three sacks, matching a season-high, and finished with eight tackles for loss.

"It's [about] the mental aspect of the game after [Watson] gave up the one sack, and that just comes with experience," Jones said during the Sun Belt Conference's media availability Monday. "In terms of moving forward, we'll look to the best five on the field that give us an opportunity to win."

The consequences pf the line's subpar showing could be seen in the rest of the offensive numbers.

Quarterback James Blackman attempted just 18 passes, by far his fewest in a complete game as a Red Wolf, and his 10 completions marked the third time this season in which he failed to complete at least 20.

"It's [a matter of playing] complementary football, just being able to sustain drives, hold the ball, get the time of possession up," Blackman said postgame Saturday. "When we do score fast and the defense gives us the ball back, we've got to find a way to...get a good drive going, go down there and finish off the drive so we can give them a rest."