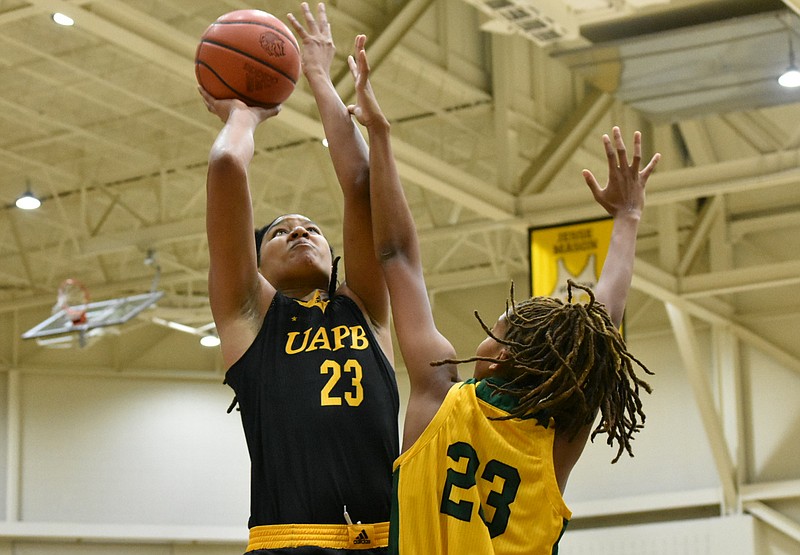 Maori Davenport of UAPB powers up for a shot over Dasia Turner of Philander Smith in the first quarter Tuesday at H.O. Clemmons Arena. (Pine Bluff Commercial/I.C. Murrell)

Davenport backed up her new endorsement deal with the soon-to-be-launched Hoop Gang Apparel by pulling down 20 rebounds to go with a game-high 19 points. Davenport grabbed 11 of her rebounds on the offensive end and blocked 4 shots to boot.

The Lady Lions owned a 55-29 rebounding edge over the Panthers.

Beck dished 10 assists and scored 13 points. She also had 7 rebounds and 6 steals.

Morgan had 8 rebounds and 4 steals.

UAPB came out of a media timeout and scored 11 unanswered points to break a 6-all tie. The Lady Lions led 23-7 after one period and 37-16 at halftime, not giving their longtime rivals from the National Association of Intercollegiate Athletics a chance to come back.

De'vena Smith scored 16 points and Dasia Turner had 9 for the Panthers.

UAPB will take a 10-day break through Thanksgiving and resume action Nov. 25 against Columbia University in a tournament at the University of Miami. Tipoff is scheduled for noon Central.

UAPB will then play Miami on Nov. 27.

The Golden Lions (1-3) will tip off at 11 a.m. Central today against Kent State University (3-0) of the Mid-American Conference. There will not be any live video of the game available, but audio of the game is available on The Varsity Network app.

UAPB has come within a point of shocking Texas Christian University and eight points of the University of Oklahoma during a three-game week. The Lions' lone victory was 87-55 over Champion Christian College last Wednesday.

Kent State, a 23-11 MAC finalist last season, is playing the third of a four-game homestand. The Golden Flashes have scored double-digit victories over Northern Kentucky University, Baldwin-Wallace University and the University of Portland.

Sincere Carry, a 6-foot-1 redshirt senior, averages 20.7 points per game to lead the Flashes. He shoots 48.9% from the floor.

Shaun Doss Jr. has enjoyed a strong welcome back to Pine Bluff, leading the Lions with 18.8 points per game and shooting 45.8% from the floor. 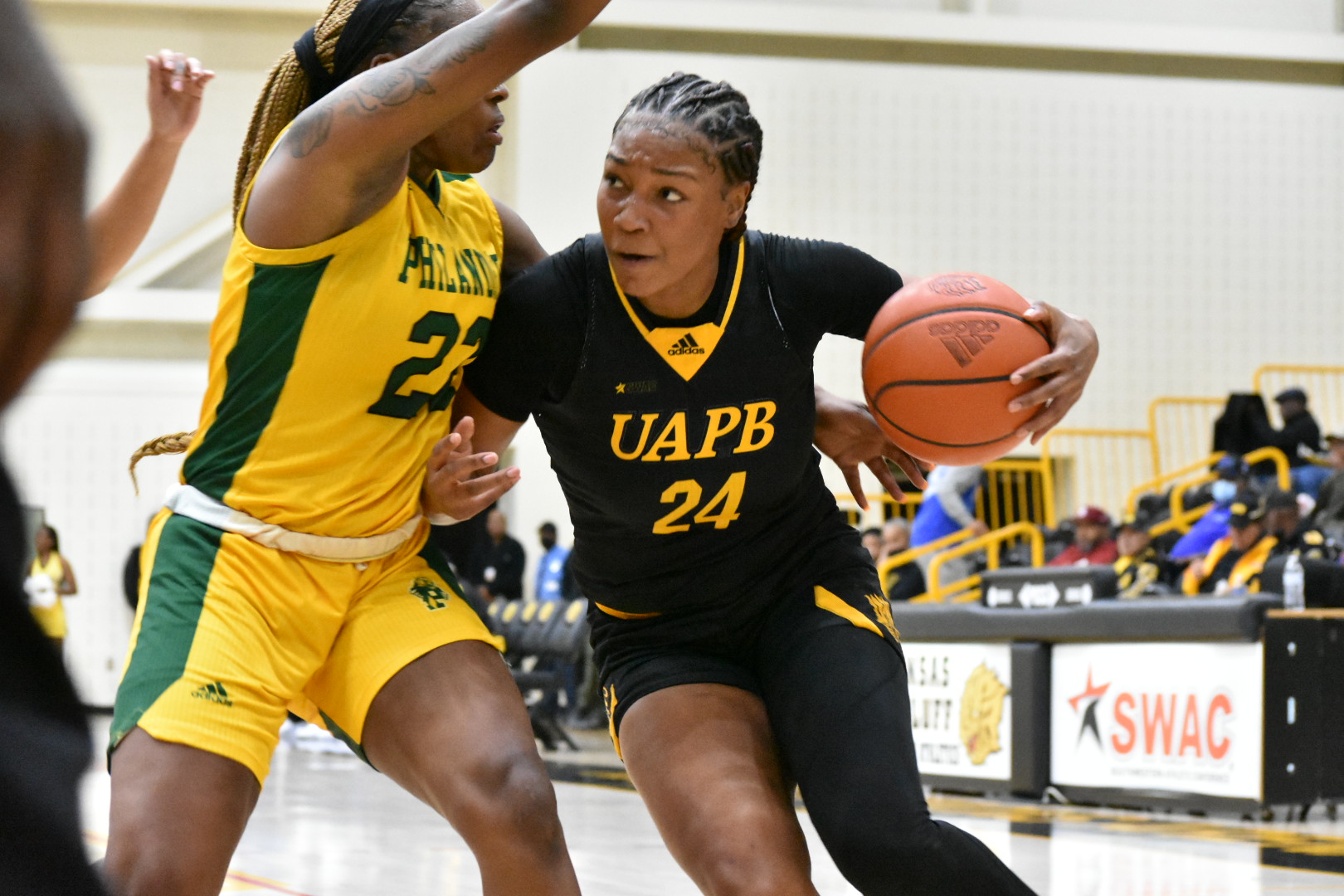 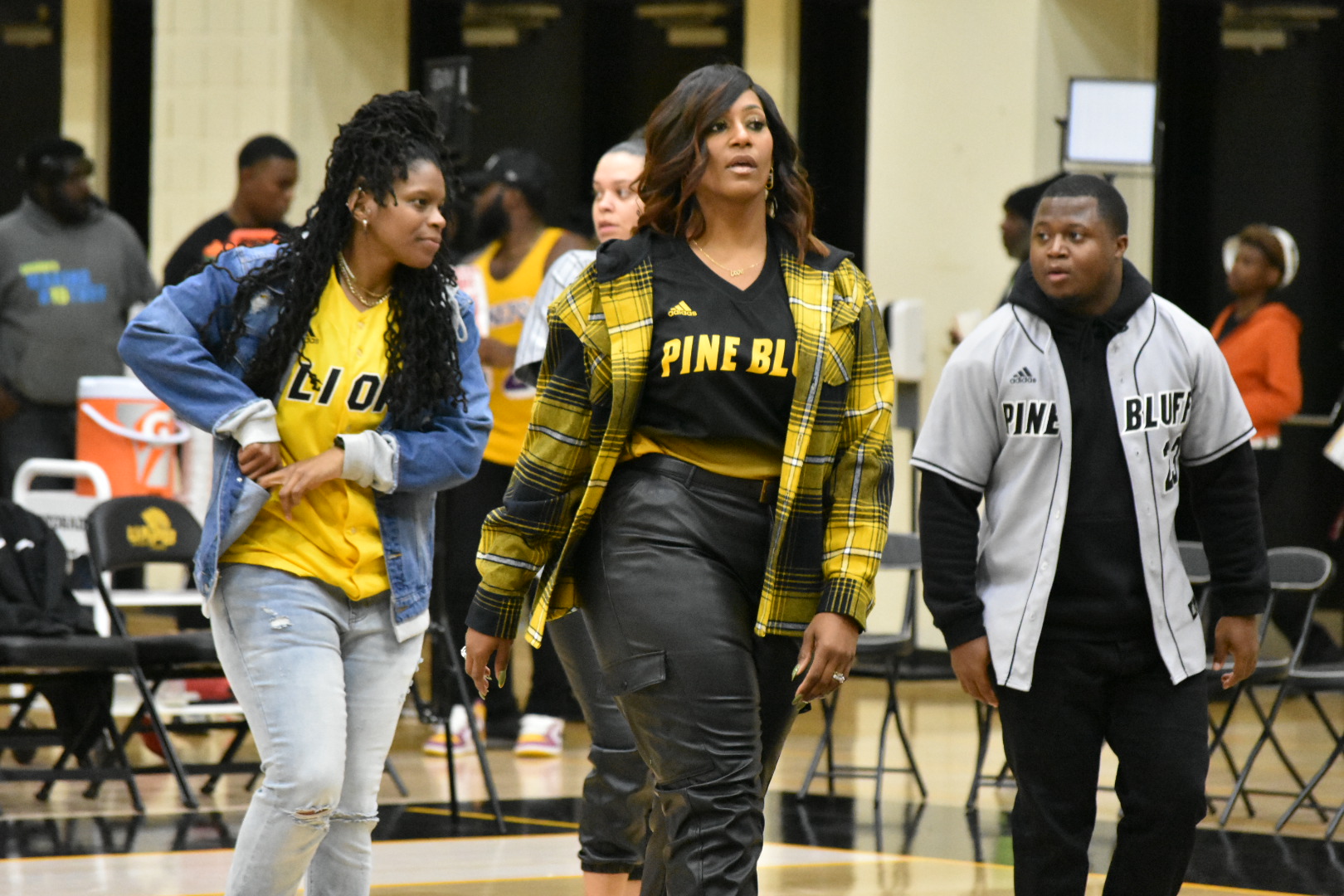