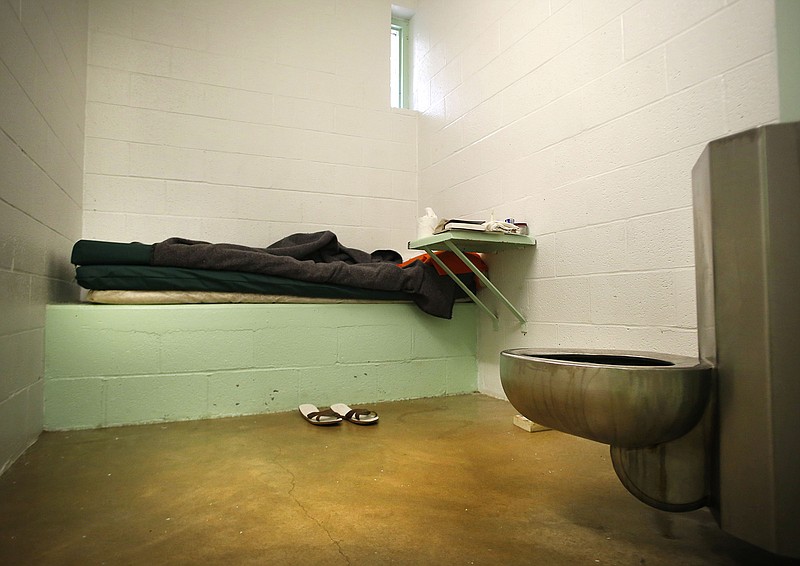 One of the cells at the Madison County Jail is shown May 15, 2014, in Huntsville. In 2014, the state’s 4th District Criminal Detention Facilities Review Committee found that the Madison County jail — which was built in the early 1980s to accommodate eight beds — didn’t comply with state standards. (File Photo/NWA Democrat-Gazette)

He said the Quorum Court meets next on Nov. 21, and if they decide to move forward, construction of the jail could begin sometime next year.

Voters on Nov. 8 approved a 0.5% sales tax for a maximum $16.9 million bond issue to finance construction of a new jail and Sheriff's Office. But voters rejected a 1.25% sales tax to pay for maintenance and operation.

With all the votes counted, based on unofficial results, the 0.5% tax vote was:

With all the votes counted, based on unofficial results, the 1.25% tax vote was:

On three previous occasions, Madison County asked voters to approve a sales tax to help fund construction of a new jail or at least an addition to the existing jail. The tax proposals were rejected all three times.

Weaver said the Nov. 8 vote was the first time the majority has voted for construction of a new jail.

Weaver said it would cost about $16 million to build a 148-bed jail. He said a 0.5% sales tax would bring in about $1.1 million per year based on current collection rates.

He said the 0.5% tax would sunset when the bonds are paid off. The 1.25% tax would have been perpetual.

In 2014, the state's 4th District Criminal Detention Facilities Review Committee found that the Madison County jail -- which was built in the early 1980s to accommodate eight beds -- didn't comply with state standards, so it was converted to a 24-hour holding facility.

From 2015 until the end of 2021, Madison County's longer-term detainees were held in the Washington County Detention Center -- 30 miles to the west in Fayetteville. But with that jail overcrowded, Washington County Sheriff Tim Helder ended the agreement.

Since then, Madison County Sheriff Rick Evans has been housing his detainees at various jails around the state that have room. Besides the cost of paying other counties to house detainees, transportation has been a factor since some of the Madison County detainees are housed as far away as the Lafayette County jail in Lewisville, about 300 miles to the south.

SouthBuild Team of Collierville, Tenn., has been consulting with Madison County on the proposed jail project.

In Scott County, construction of a new jail was completed in 2008. Then it sat vacant for about a year before voters approved a 0.5% sales tax for maintenance and operation, along with a 0.5% sales tax to go to the county fund.

Scott County Judge James Forbes told voters at the time that the Quorum Court would cut the county's property-tax rate by 2.5 mills if they passed the sales-tax vote.

"We held to it, and we have not had a problem from Day 1," Forbes said Monday. "The only reason we got a sales tax passed for operation and maintenance is because we reduced the millage. If it hadn't been for reducing the property tax, we would never have gotten this tax passed, and I still believe that today. You've got to give people something to get something."

Newton County went ahead and built a new jail, but it sat vacant for over a year.

Keith Slape, who was Newton County sheriff at the time, said he offered to take Arkansas Department of Corrections inmates to pay the jail's maintenance and operations costs. State officials went along with the idea. Slape said at the time the state paid $28 per inmate per day.

Slape said his jail had 32 beds, and he had to keep 21 state inmates daily to make it work financially.

"I had to run it tight, but it brought in enough," he said.

Glenn Wheeler, the current Newton County sheriff, said he was housing about 24 state detainees in the jail until the covid-19 pandemic hit. He said the Department of Corrections pulled the vast majority of them out of the jail during the pandemic and hasn't increased the number to where it was before. But Wheeler said the Newton County Quorum Court has increased his budget "a little bit" to help make up for the shortfall.

"However, we now have so many serious local inmates in there that we don't always have room for [the state detainees] anyway," Wheeler said in a text message.