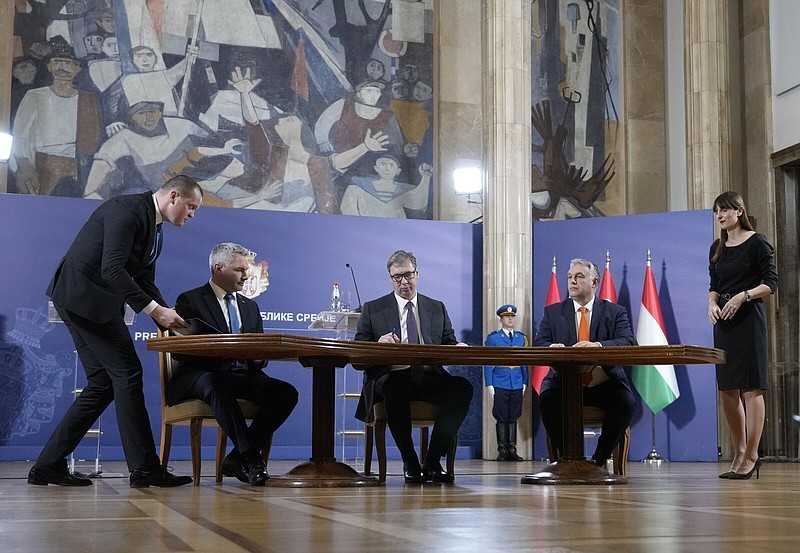 BELGRADE, Serbia -- Austria, Hungary and Serbia on Wednesday held another top-level meeting dedicated to curbing migration, including by sending more than 100 police officers, vehicles equipped with night vision cameras and drones to the border with North Macedonia.

Austria and Hungary also pledged to help Serbia organize deportations by plane of people who come to the Balkan nation from so-called safe countries of origin and aren't eligible for asylum in the member states of the European Union or in Serbia, officials said.

"We have come to the point where individual EU countries are looking for new forms of partnership outside what is possible in the EU," Austrian Chancellor Karl Nehammer said. "The EU's asylum system has failed."

Officials from Austria, Hungary and Serbia already held a similar meeting weeks ago and lower-level talks have been held in the meantime. The initiative came after countries reported a significant increase in the numbers of migrants moving along the so-called Balkan route.

Migrants come into Serbia from North Macedonia and Bulgaria after arriving there from Turkey and Greece. From Serbia, people who are trying to reach Western Europe proceed toward the neighboring EU member nations Hungary, Romania or Croatia and on further west from there.

Experts have said that the Balkan land route of migration gets more active in bad weather when the perilous crossings over the Mediterranean and Aegean Seas become even more dangerous. Most migrants come from Afghanistan and Syria, but there are also people fleeing poverty and violence in Africa or Asia.

Serbia has been under pressure also to revoke its relaxed visa system with countries in Asia and Africa that have become a source of migration. President Aleksandar Vucic said that after abolishing visa-free rules with Tunisia and Burundi, Belgrade will change regulations with two more countries by the end of the year.

Nehammer said Austria could have more than 100,000 asylum requests by the end of the year, compared to around 40,000 people who applied for asylum in 2021. Hungarian Prime Minister Viktor Orban said his country has recorded some 250,000 attempts at illegal border crossings this year.

"We do not need to manage migration. We need to stop it," said Orban, who is known for his staunchly anti-immigration policies. In 2015-2016, Hungary built a razor wire fence on the border with Serbia to stop people from entering. "We need to show them [migrants] that they cannot cross."

Migrants often spend months on the road, sleeping rough and facing abuse at the hands of people smugglers. Usually, migrants make dozens of attempts to cross borders with police pushing them back, before they manage to move on.