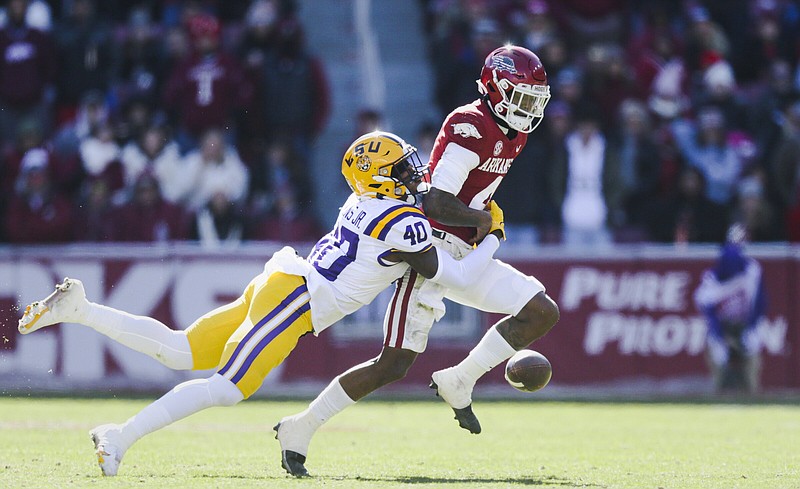 It was another frustrating Saturday for the Arkansas Razorbacks. The defense played well. The offense, missing quarterback KJ Jefferson, did not.

Arkansas fell on a frigid Saturday to LSU, 13-7. It was a day when the defense held the Tiger offense to just 284 yards. The problem was that the Arkansas offense only managed a season-low 249 yards.

The defensive-oriented game featured a combined 13 punts, 12 sacks and 17 tackles for loss. Arkansas fell to 5-5 overall, needing a win against either Ole Miss this week or Missouri next week to become bowl eligible.

Here are the picks for this weeks games:

Ole Miss 29, Arkansas 24 — The Rebels roll into Fayetteville with an 8-2 record, having lost 45-20 to LSU and 30-24 to Alabama. The wins have come over Troy, UCA, Georgia Tech, Tulsa, Kentucky, Vanderbilt, Auburn and Texas A&M. This is a game Arkansas needs to win on what will be yet another cold day in Fayetteville. Do the Razorbacks still have the confidence to do so? That’s yet to be seen.

Ouachita 23, Northwest Missouri State 22 — Ouachita finished the regular season 11-0 with a win for the ages in the Battle of the Ravine. The Tigers trailed by 14 points with less than five minutes remaining in regulation. They tied the score, Henderson missed a field goal attempt that would have won the game on the final play of regulation and then Ouachita won in overtime, converting a fourth-and-one rather than kicking a field goal to send the game to a second overtime. As far as tradition is concerned, Northwest Missouri (9-2 this season) is the Alabama of NCAA Division II with more national championships than any other school. It’s a tough draw for Ouachita, but the Tigers are home at Cliff Harris Stadium.

Texas State 35, Arkansas State 31 — ASU got a stop on a UMass two-point conversion attempt to avoid overtime in Jonesboro last Saturday and defeat Massachusetts by a final score of 35-33. The Red Wolves are 3-7. It says a lot about the strength of this year’s team — or the lack thereof — that it struggled so mightily against a 1-9 squad. This week’s opponent, Texas State, is also 3-7. We’ll give a slight advantage to the home team (the game is in San Marcos) in a battle between two programs that already are looking forward to next season.

Jacksonville State 39, UCA 32 — The Bears cruised to a 34-7 win at Stephen F. Austin last Saturday to even their record at 5-5. They can finish the season with a winning record in Conway on Saturday afternoon by defeating Jacksonville State. That won’t be easy. The Alabama school comes to town with an 8-2 record. The only losses have been to Tulsa and Southeastern Louisiana. The wins have come against Stephen F. Austin, Davidson, Murray State, Nicholls, Kennesaw State, North Alabama, Austin Peay and Eastern Kentucky.