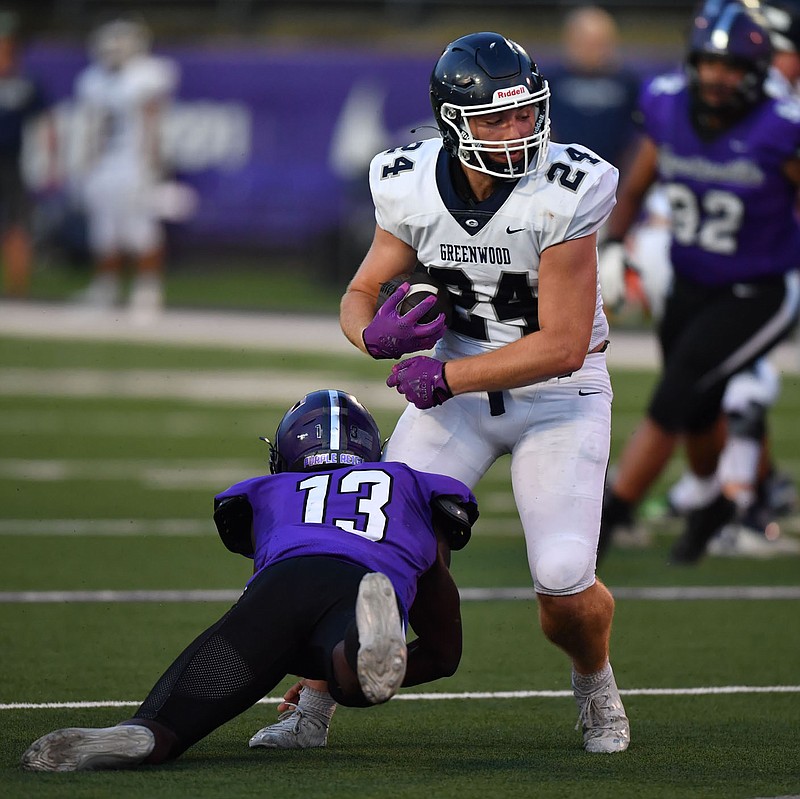 Greenwood receiver Aiden Kennon (24) carries the ball Tuesday, Aug. 16, 2022, as he is hit by Fayetteville defensive back Isaiah Taylor (13) during the first half at Harmon Stadium in Fayetteville. Greenwood will host Russellville tonight in a Class 6A state playoff game at Smith-Robinson Stadium. (NWA Democrat-Gazette/Andy Shupe)

It's spread out over several areas.

Kennon is part of a four-receiver pass-catching corps that is among the best in the state.

"I don't really think about that during the game," Kennon said. "I just try to do my part. All four of us get the ball a lot. It helps us win. That's all I care about at the end of the day."

Kennon's physical play adds to the contributions of the entire receiving corps.

"We have guys with better numbers, but it's because of what he does without the ball that they turn those 8-yard catches into 50-yard catches," Young said. "He has tremendous strength and size. He has great hands for his size."

"I like to hit people, and I like to hit them really hard," Kennon said. "It's my favorite part of football, really."

Kennon, a senior, grew up playing mostly linebacker, and he's taken that attitude over to the offensive side of the ball where he loves to bowl over defenders.

"I find it kind of embarrassing when one person tackles me, so I try to stay on my feet and let the other wave come in," Kennon said. "I've always done that."

Young, who was the offensive coordinator before taking over as head coach three years ago, basically stole Kennon away from the defense to play offense. His physical presence is felt also in the running game for the Bulldogs.

"We've struggled some at times running the ball," Young said. "When we run the ball, it's because he's done a great job as a kind of fullback or H-back. He's so dynamic he can play in the box or we can spread him out. He's a matchup nightmare. He falls forward. I think the best is yet to come. He's a guy that we look to get the ball to but then leading for the other guys when he doesn't have it."

Kennon also has a long relationship with senior quarterback Hunter Houston, and that's apparent on the field.

"Same as always, we've been best buds since seventh grade," Kennon said. "We've always had that kind of connection. We've played the same sports and on the same team since the seventh grade."

Greenwood hosts Russellville in the second round of the Class 6A playoffs at 7 p.m. today in Smith-Robinson Stadium. The two teams were tied after three quarters, 21-21, when they played in a conference game four weeks ago. Greenwood scored three fourth-quarter touchdowns and won, 42-21. That game was between the big matchups against Lake Hamilton and Pulaski Academy. Perhaps the Bulldogs overlooked the Cyclones.

On top of that, Greenwood is coming off a 49-35 loss at Little Rock Christian in the regular-season finale.

"It was kind of a wakeup call," Kennon said. "We've ramped it up, and have paid more attention to detail in practice. We're ready for the playoffs and a three-game season."