U.S., others denounce actions of North Korea by Compiled by Democrat-Gazette Staff From Wire Reports | November 19, 2022 at 5:26 a.m. 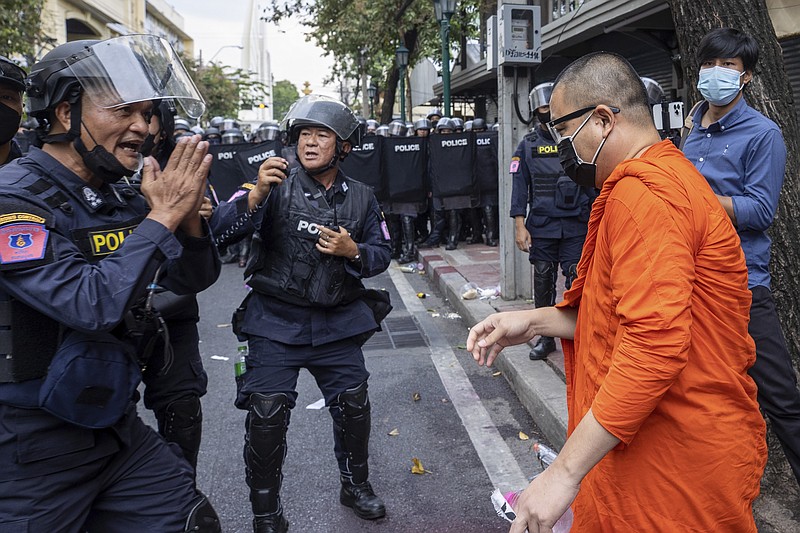 Police gesture in respect towards a monk as they block protesters trying to march to the Asia-Pacific Economic Cooperation APEC summit venue, Friday, Nov. 18, 2022, in Bangkok, Thailand. (AP Photo/Wason Wanichakorn)

BANGKOK -- Threats to peace and stability burst onto the agenda at a summit of Pacific Rim leaders in Bangkok on Friday after North Korea fired an intercontinental ballistic missile that landed near Japanese territorial waters.

The missile test was a stark reminder of persisting risks of conflict in the region and beyond, on top of frictions between the big powers that threaten to unravel the global order.

"This conduct by North Korea most recently is a brazen violation of multiple U.N. Security Council resolutions. It destabilizes security in the region and unnecessarily raises tensions," Harris said in remarks as the meeting of Asia Pacific Economic Cooperation leaders started.

"We strongly condemn these actions and we again call for North Korea to stop further unlawful, destabilizing acts," she said.

North Korea is under United Nations sanctions for past weapons tests but has not faced new sanctions this year because U.S. attempts were opposed by China and Russia in the Security Council.

North Korean leader Kim Jong Un said the test of a newly developed intercontinental ballistic missile confirmed that his country has another "reliable and maximum capacity" weapon to contain outside threats.

Kim said his country is compelled to further bolster its "overwhelming nuclear deterrence" because U.S.-led military threats have been getting more undisguised. Kim stressed the need to have the U.S. and its allies realize that their military steps against North Korea would "lead to their self-destruction," North Korea's Central News Agency said.

Some foreign experts said the Hwasong-17 missile is still under development but is the North's longest-range ballistic weapon designed to carry multiple nuclear warheads to defeat U.S. missile defense systems.

KCNA said the missile fired from the Pyongyang International Airport traveled up to a maximum altitude of about 3,750 miles and flew a distance of about 620 miles before it landed on the preset area in international waters off the country's east coast.

As part of the Asia Pacific Economic Cooperation forum's scheduled meeting Friday, its 21 members' leaders had already appeared likely to issue a joint declaration condemning the war in Ukraine after their foreign ministers agreed on a statement that "deplores in the strongest terms" the invasion by Moscow.

The statement followed a similar approach as that adopted at a summit of the Group of 20 leading economies earlier this week, where leaders endorsed a statement saying that "most" -- not all -- had agreed and that there were differing opinions. Russia's foreign minister attended the G-20.

The strategy is a shift from the past, when rules requiring a consensus prevented such gatherings from issuing declarations on such divisive issues. None of the earlier Asian cooperation forum preparatory meetings this year issued statements because of disagreements over whether to mention the conflict in Ukraine.

At the Asian forum in Thailand and at the G-20 meeting in Bali, Indonesia, officials appear to have chosen to agree to disagree. In Bali, China and India, after months of refusing to condemn Russia's war in Ukraine, did not block the release of the forum's statement that harshly criticized Moscow.

"Most members strongly condemned the war in Ukraine and stressed it is causing immense human suffering and exacerbating existing fragilities in the global economy -- constraining growth, increasing inflation, disrupting supply chains, heightening energy and food insecurity and elevating financial stability risks," said the statement issued Friday. "There were other views and different assessments of the situation and sanctions."

It noted that the Asia Pacific Economic Cooperation forum "is not the forum to resolve security issues," but acknowledged "security issues can have significant consequences for the global economy."

It's a message that has been voiced by many during this week heavy in summitry.

"Geopolitical tensions are detracting from peace and stability and undermining the rules-based international order, which we all agree are essential," Australian Prime Minister Anthony Albanese told the opening session of the forum's two-day leaders meeting, which ends today.

At the meeting, leaders appealed for an end to Russia's war on Ukraine and considered strategies for nursing along economic recoveries from the coronavirus pandemic while contending with food and energy crises, the need to cut the carbon emissions that cause climate change and other urgent tasks.

At a business conference on the sidelines of the Asia Pacific forum, French President Emmanuel Macron called for an end to confrontation, in Ukraine and also in Asia, where he said friction between the biggest economies, the U.S. and China, was forcing countries to take sides.

"There is no stability or peace except one based on international order and respect," said Macron, who was invited to the summit as a guest by the host country, Thailand.

The forum's members account for nearly four of every 10 people and almost half of world trade. Much of its work is technical and incremental, carried out by senior officials and ministers, covering areas such as trade, forestry, health, food, security, small and medium-size enterprises and women's empowerment.

Apart from the French president, Thailand also invited Crown Prince Mohammed bin Salman, the prime minister of Saudi Arabia; and Cambodian Prime Minister Hun Sen, who was to represent the Association of Southeast Asian Nations but is not attending after getting covid-19.

The summit venue, at Bangkok's main convention center, was cordoned off with some streets closed to traffic. Riot police stood guard behind barricades at a major intersection.

Police clashed in another area of Bangkok with protesters who took the opportunity of the forum meeting to renew calls for democratic reforms in Thailand and accuse the government of promoting policies that favor big business over ordinary people.

Several hundred protesters gathered about 4 miles from the meeting site, hoping to march to the venue and hand over a letter stating their concerns.

Police blocked them, sparking a violent confrontation with some protesters tossing debris and other items at police, who then charged the crowd, shooting rubber bullets. Several people were injured and a number of arrests were made in the standoff, which lasted several hours. 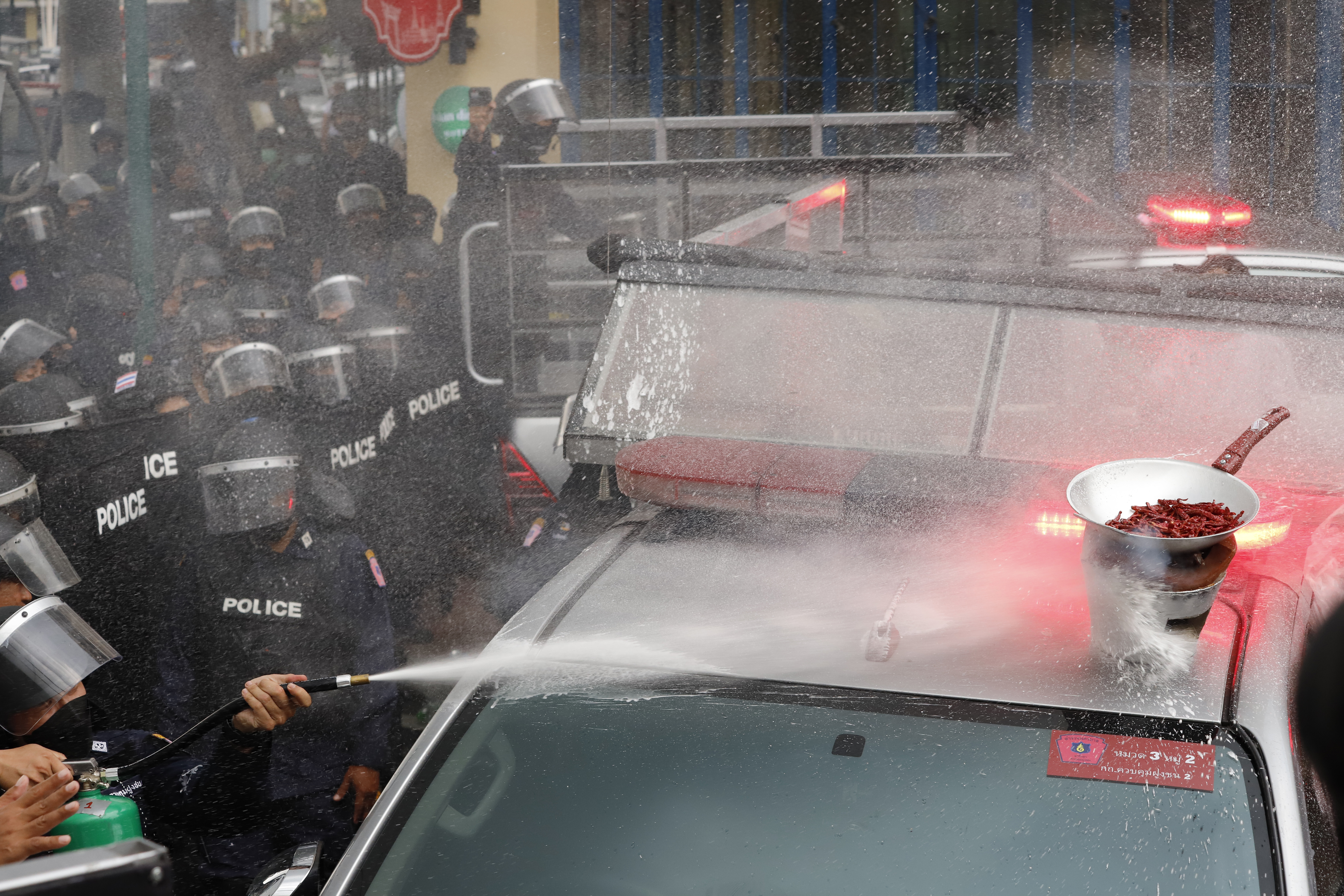 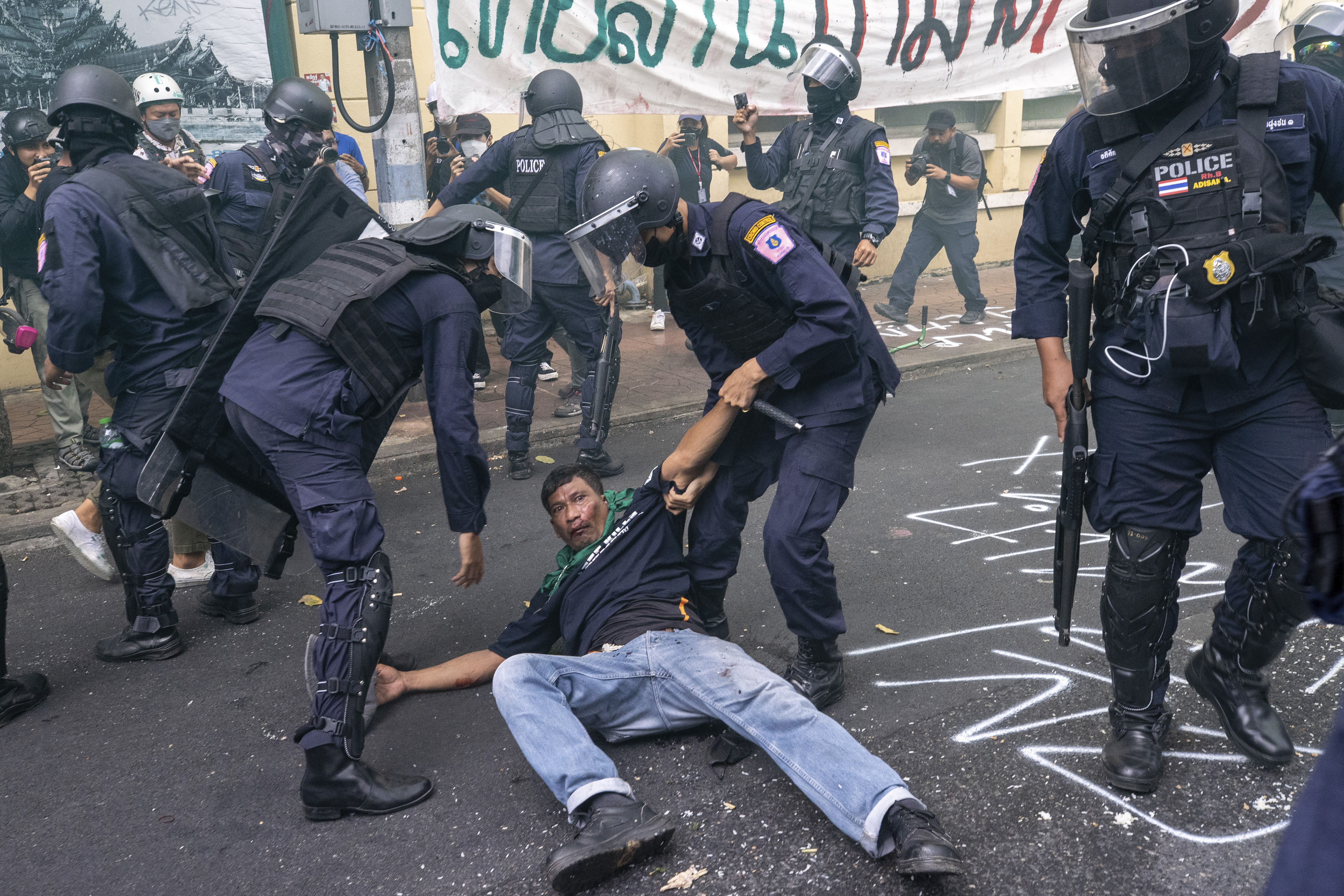 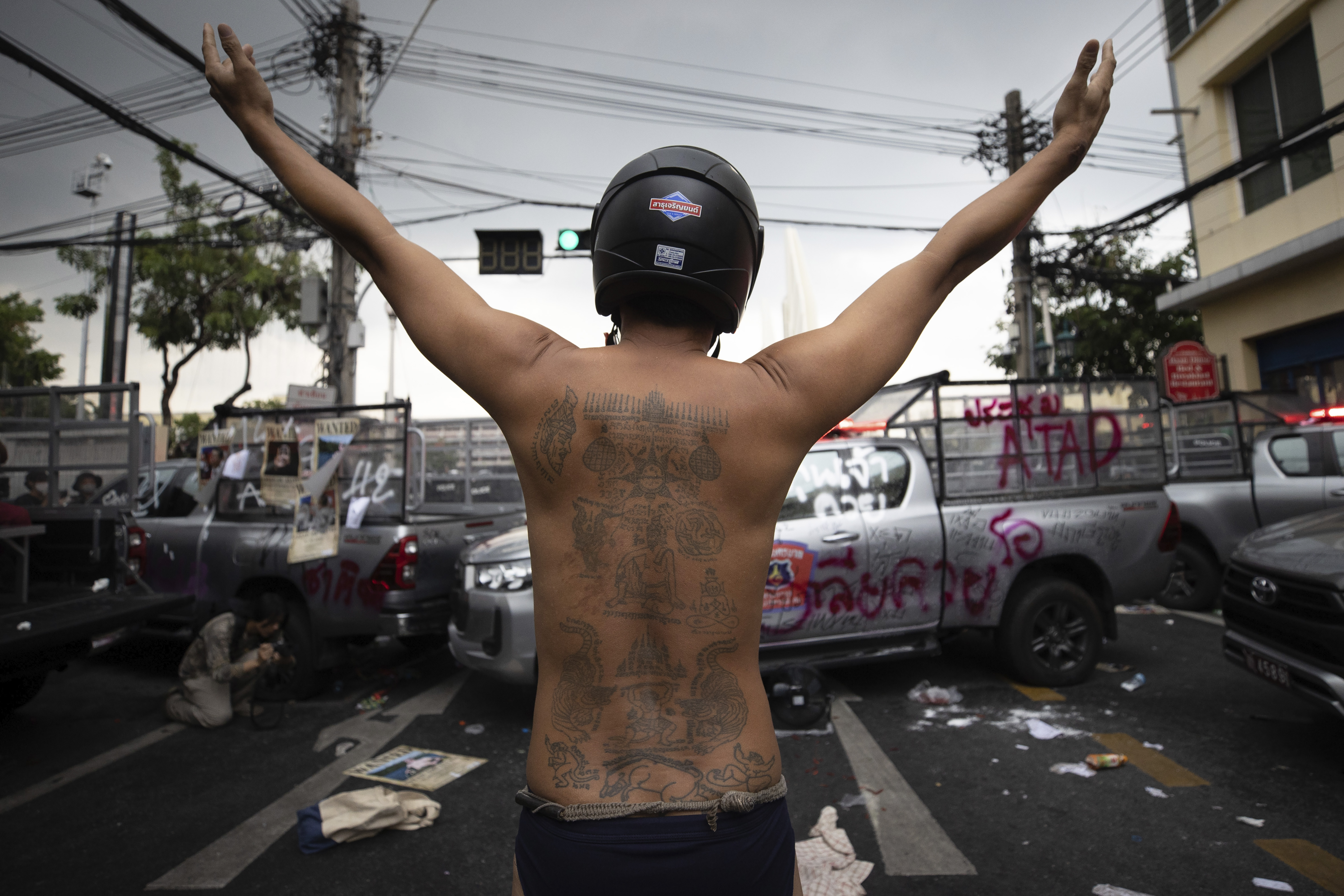 A protester raises his arms behind vandalized police vehicles during a confrontation with police as they try to march to the Asia-Pacific Economic Cooperation APEC summit venue, Friday, Nov. 18, 2022, in Bangkok, Thailand. (AP Photo/Wason Wanichakorn) 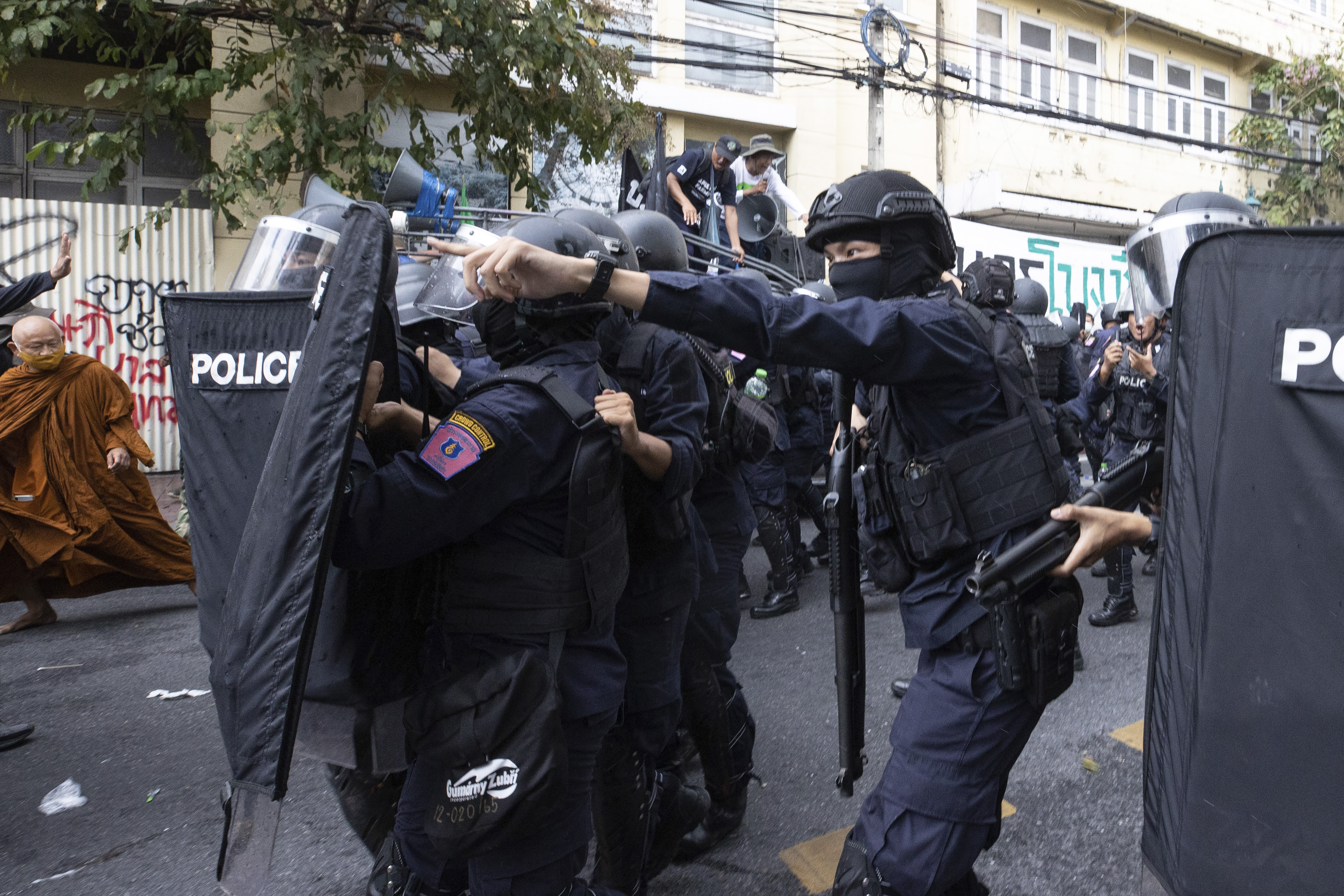 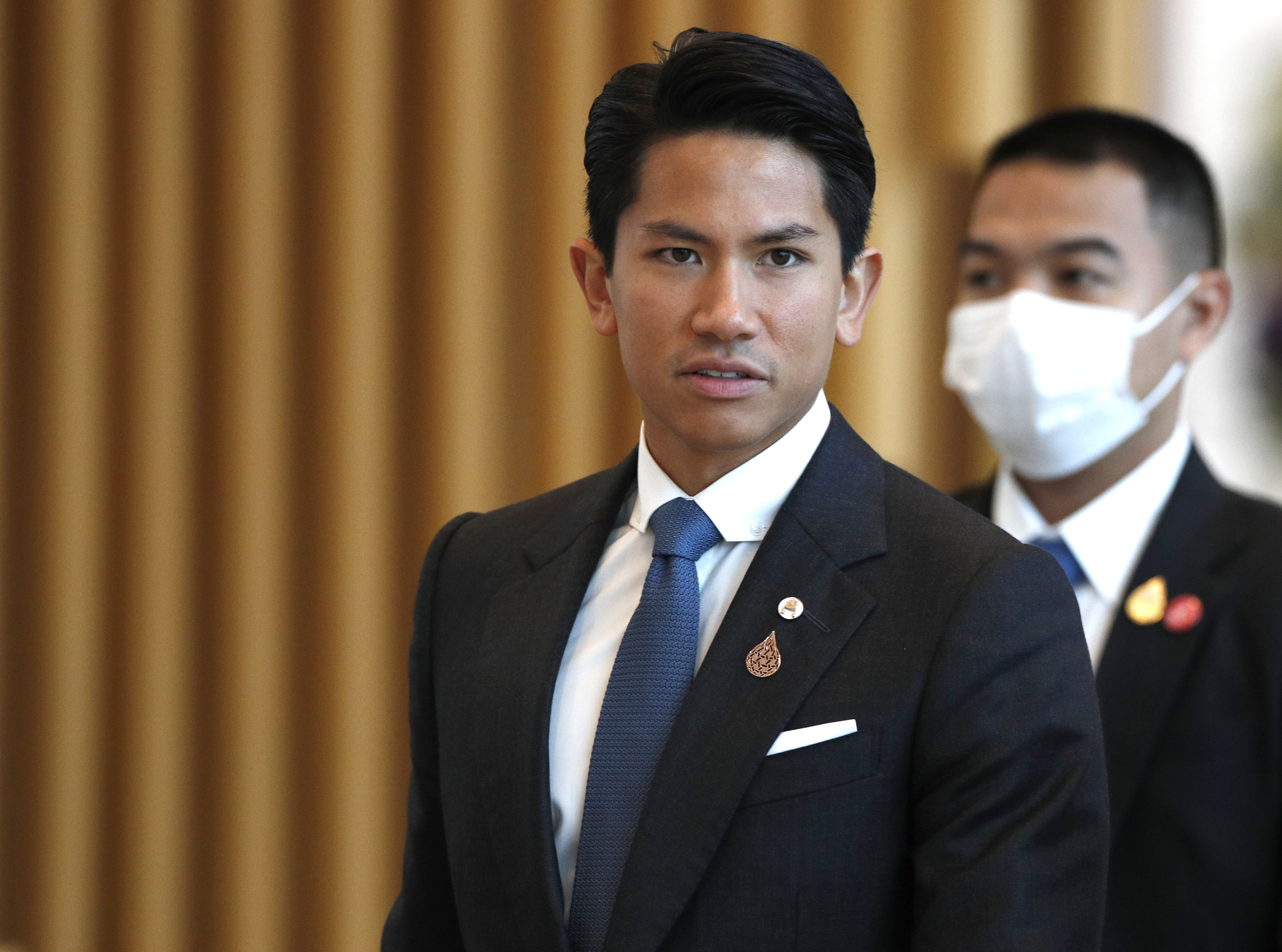 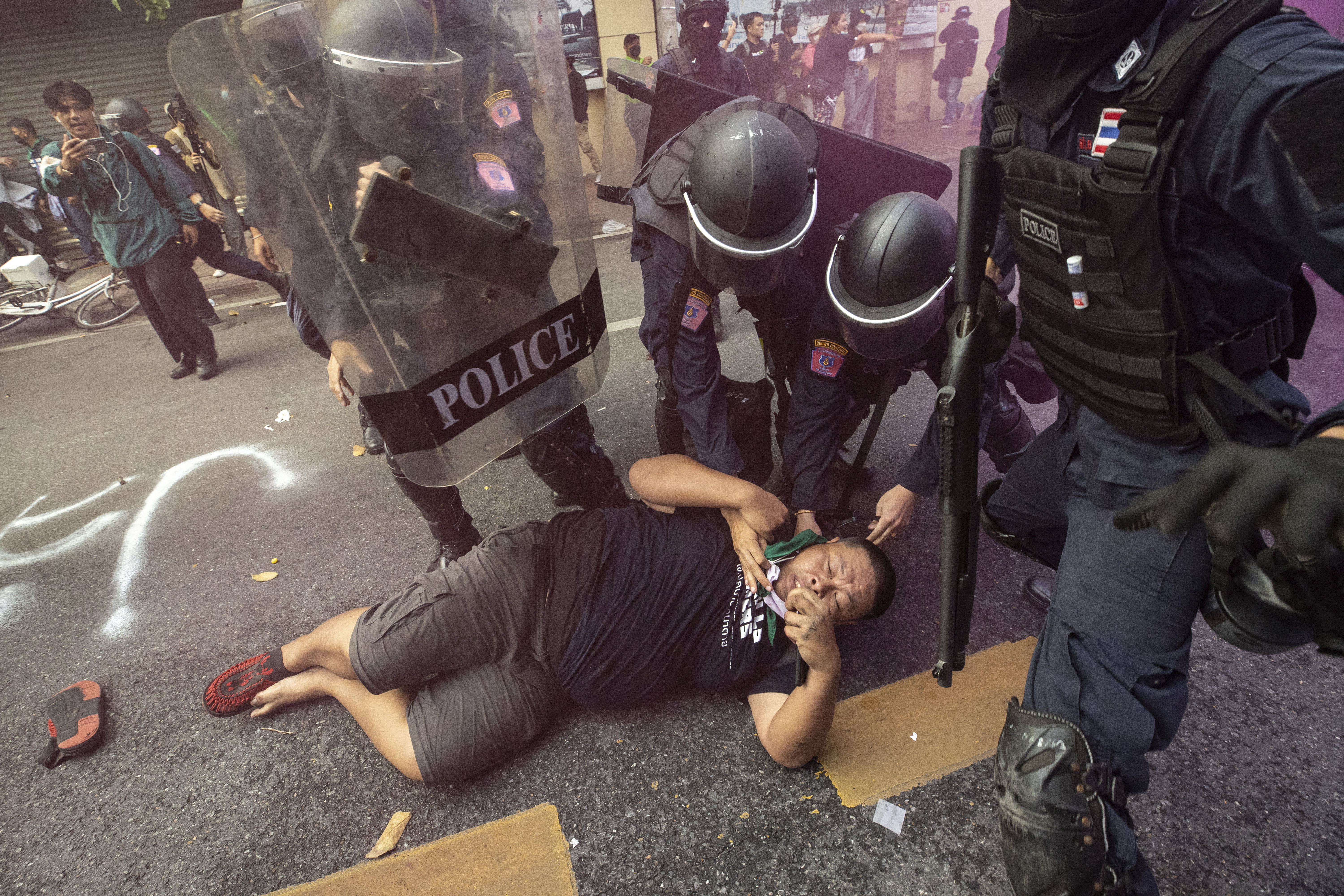 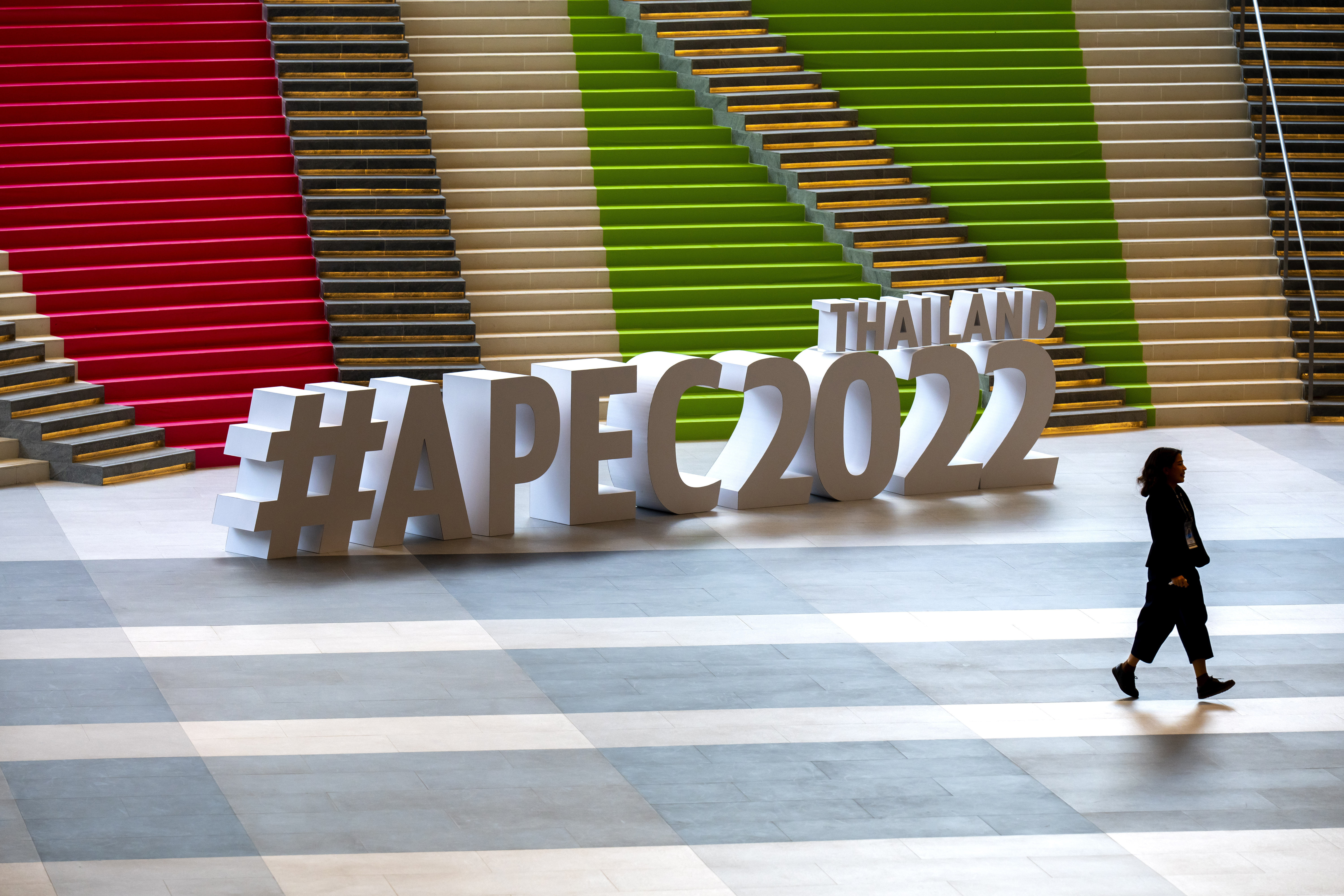 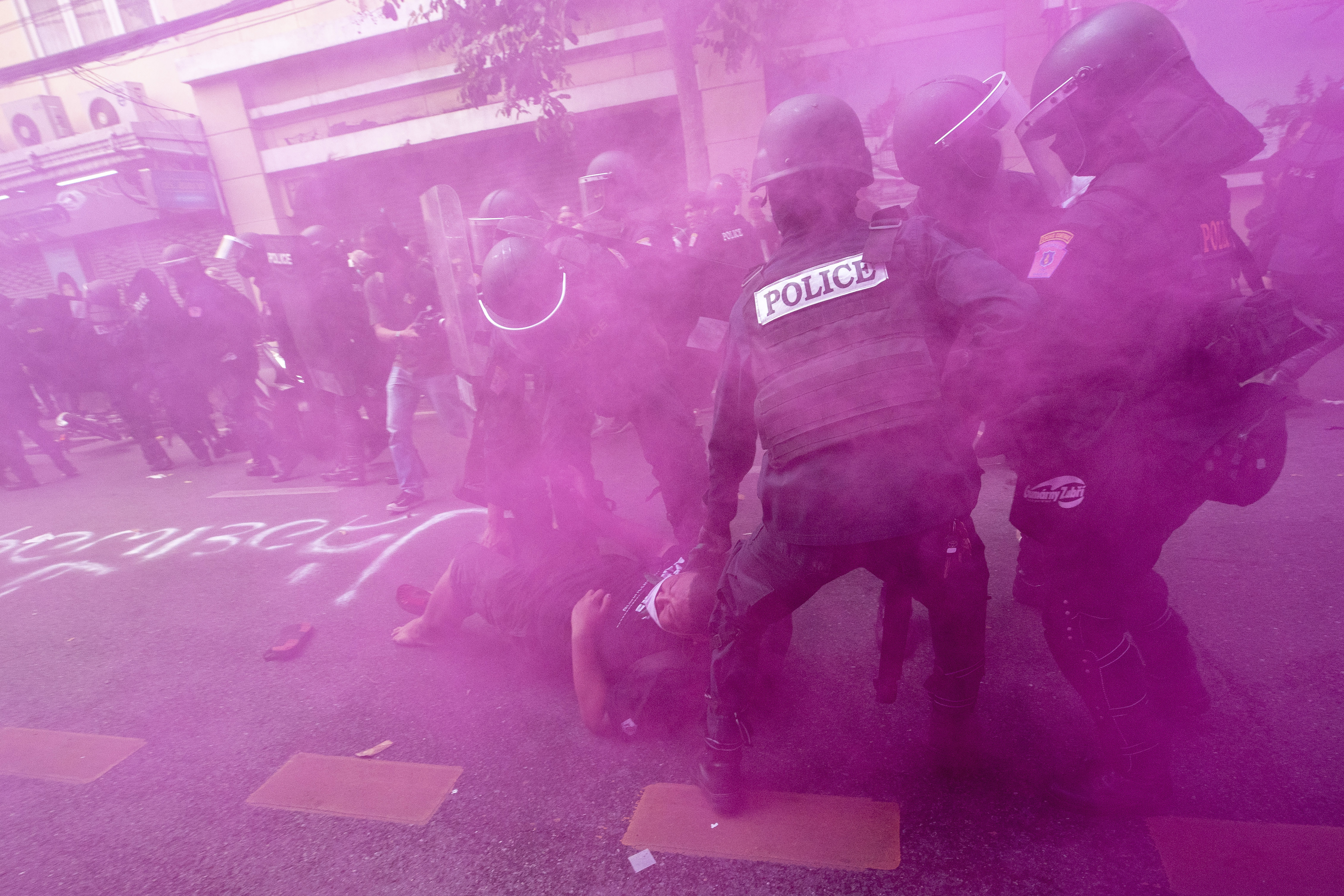 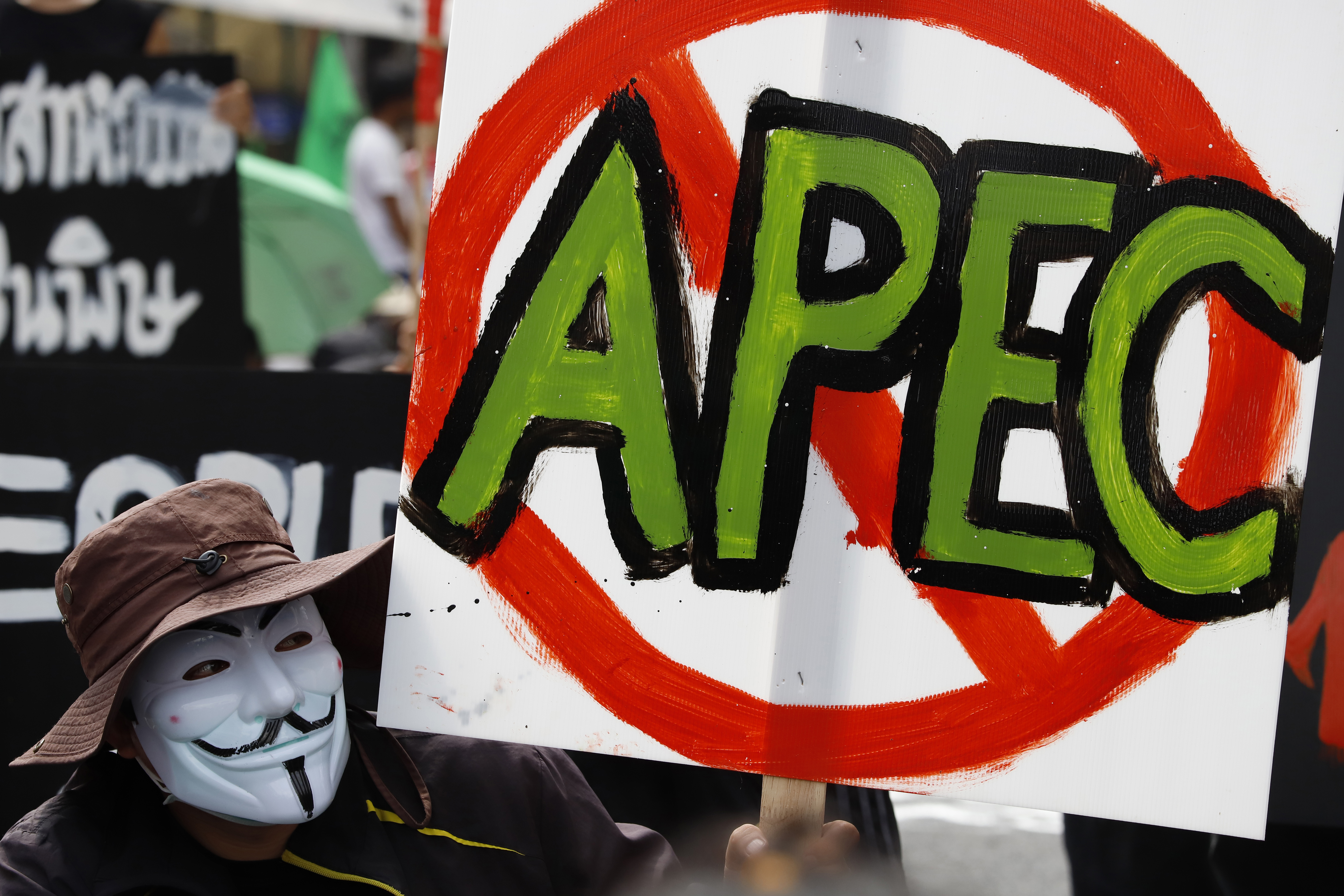 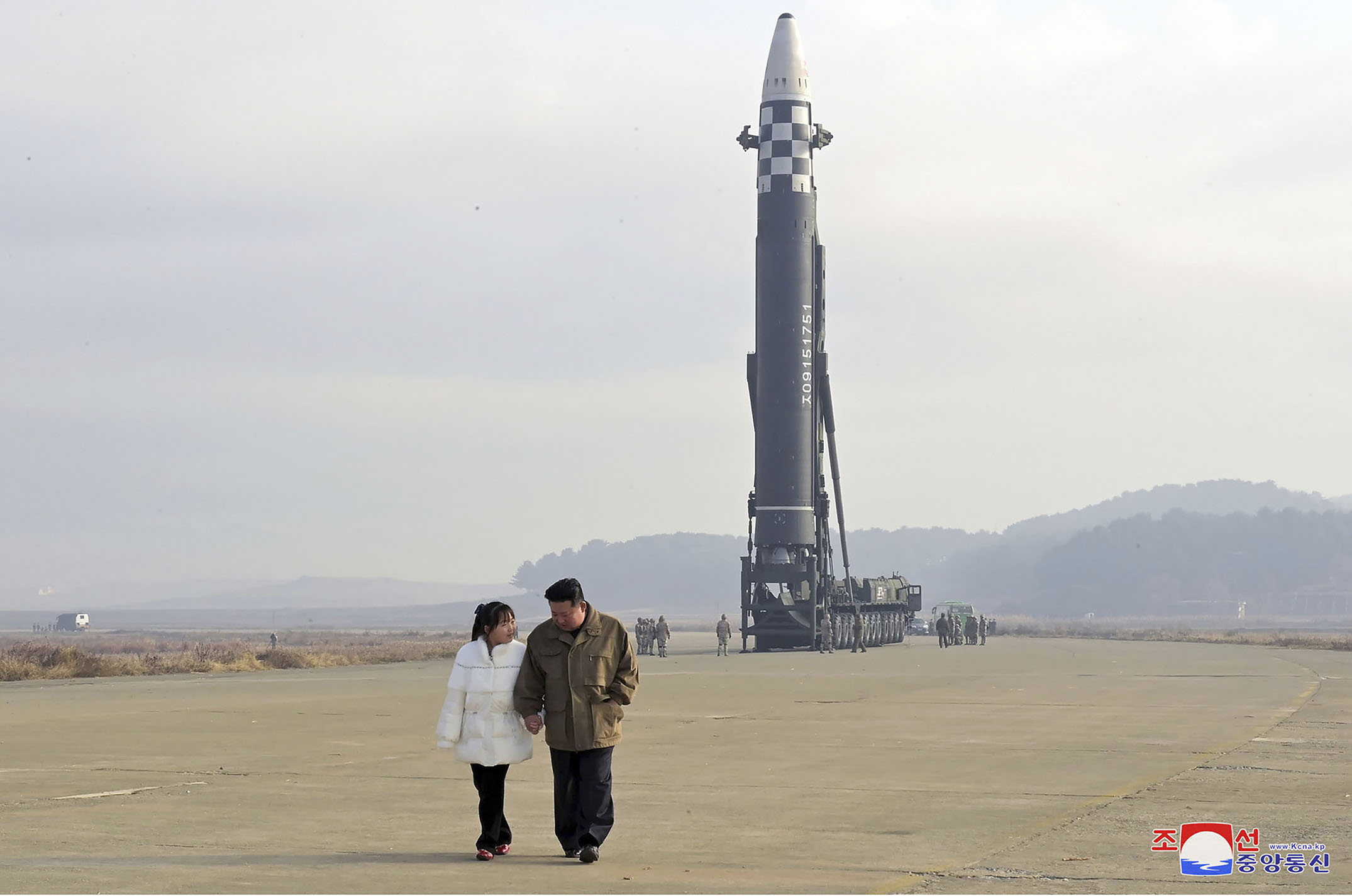 North Korean leader Kim Jong Un and his daughter inspect the site of a missile launch Friday at Pyongyang International Airport. North Korea’s state media said Kim oversaw the launch of the Hwasong-17 missile. The content of this image is as provided and cannot be independently verified. (AP/Korean Central News Agency/Korea News Service)