Nuclear submarine is entering its final phase of construction by Alex Thomas | November 19, 2022 at 8:48 a.m. 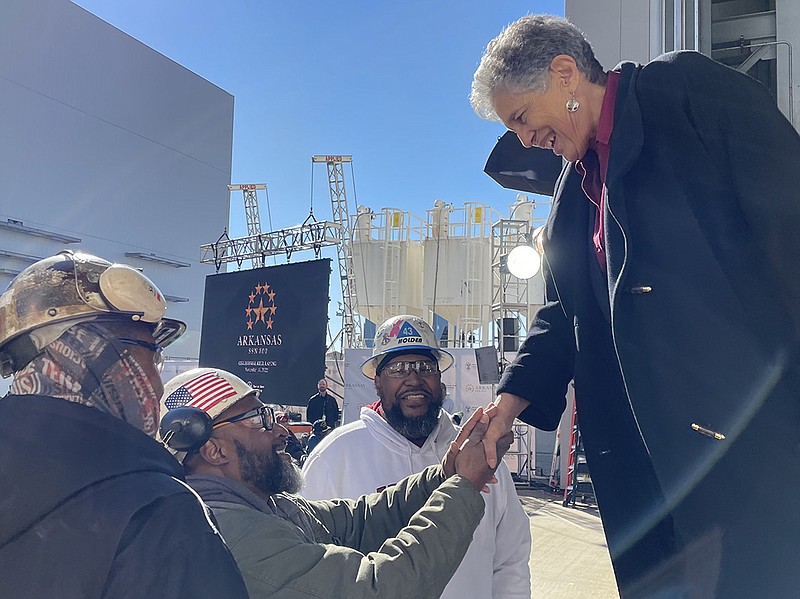 NEWPORT NEWS, Va. -- For Joe Holden, this project stands out from the others.

The Helena native has spent the past 17 years with defense contractor HII at its Newport News, Va., shipyard. He's a production foreman on the Virginia-class line of nuclear-powered submarines, and his current assignment is his fourth involving a submarine.

But Holden sees this submarine differently from the other ones. It's the USS Arkansas, the fifth vessel with such a name. It will also bear the initials of the women members of the Little Rock Nine, the Black students whose enrollment at Little Rock Central High School in 1957 marked a step forward for civil rights amid pushback from angry white protesters and then-Gov. Orval Faubus.

HII will recognize the final phase of the construction of the Arkansas today with a keel authentication ceremony at its Newport News Shipbuilding site.

The event will commemorate the laying of the submarine's foundation as well as the Little Rock Nine, with shipbuilders welding the women's initials onto steel plates to be placed on the submarine.

Holden, who is Black, described working on the submarine as "a blessing."

"They paved the way for me to get the opportunity to do what I do," he said Friday, wearing a white Razorbacks sweatshirt during a media day event at the shipyard. "This one is definitely special. When I found out that I was involved, I was like, 'Oh, yeah. It's on.' And I want to deliver it."

He added, "I always do a good job, but this is close to home. To know that the thing that I'm doing is impacting the whole country, it's personal. I lived in this state. I grew up in this state. I've got people that love me that still live in this state."

The women of the Little Rock Nine -- Melba Pattillo Beals, Elizabeth Eckford, Gloria Ray Karlmark, Carlotta Walls LaNier, Minnijean Brown-Trickey and Thelma Mothershed Wair -- were named sponsors of the submarine in 2018. Females have traditionally served as naval ship sponsors; their responsibilities include commissioning the warship when it joins the active fleet and fostering relationships with the submarine's crew.

"How many people really have [the chance] to be asked to be a sponsor of a nuclear submarine?" LaNier told the Arkansas Democrat-Gazette. "I just burst out with pride. To represent the state of Arkansas -- where I was born and raised -- is a positive thing, so I would hope Arkansans would see that as it should be."

The Little Rock Nine have received various honors recognizing their actions in 1957, including the Congressional Gold Medal in November 1999. Yet Eckford said there is a unique distinction about being named one of the submarine's sponsors.

"It was something unexpected and a rarity. It's not something like any other honors that we have received," she said.

Eckford joked that she was surprised the Navy selected "such elderly people" as sponsors.

"I hope I'm around for the commemoration and the christening, but I'm 81," she said with a laugh.

The ceremony will additionally honor the male members of the Little Rock Nine: Ernest Green, Terrence Roberts and Jefferson Thomas, who died in 2010. Green will join Eckford, Karlmark, LaNier and Wair for today's ceremony.

When LaNier learned that only the women would be honored with the sponsorship, she insisted that recognition be extended to all nine classmates.

"We are known as a group. We are known as the Little Rock Nine. It would be great to at least include the males in some form or fashion," she said. "This is how it's being done, and I'm very happy about it."

Green, who lives in Washington, D.C., had been "on notice" about being honored amid LaNier's push.

"When I was going to Central High School, I never expected anything like that," he said.

Green said the honor connects the submarine to the Little Rock Nine and Arkansas' history, but it is an additional reminder about the importance of addressing social injustice.

"They should know the state of Arkansas has the ability to change for the better, to be more inclusive, to expand its thinking, to recognize Little Rock Central High School as an opportunity and not a problem," he said.

"Whether you're in Arkansas or New York, you have an opportunity to stand up and represent right from wrong."

The Navy announced the submarine's name in November 2015, and construction followed in 2018. Newport News Shipbuilding workers have worked with General Dynamics Electric Boat -- a Connecticut-based submarine builder -- on the project for the last four years.

Crews will complete assembling the Arkansas next year with aquatic tests scheduled for 2024. The Navy will receive the submarine in 2025.

Newport News Shipbuilding workers and General Dynamics Electric Boat began building Virginia-class submarines in 2004 with improved weaponry and reduced costs compared to prior models. The submarines use a nuclear reactor as their power source.

"Historically, only male sailors were aboard submarines," he explained. "The spaces weren't designed or intended to have private spaces and special restrooms or wash facilities. You would have to make special protocols in order to accommodate the close nature of living within a submarine."

"I've been talking to my crew about resiliency, tenacity and overcoming adversity, and having the Little Rock Nine as the ship's sponsors is really easy to tie back to the crew and say, 'Look at some of the adversity and challenges that these sponsors have overcome in their lifetime,'" he said. "Just tie that back to the ship's mission. It makes [the sponsorship] the perfect choice."

Much of the attention today will focus on the Little Rock Nine. Newport News Shipbuilding President Jennifer Boykin said the submarine's sponsorship serves as a representation of the group's historical impact. It is something she hopes younger crews understand.

"If you think about the initial age of the crew that will man the Arkansas, their average age is in the mid-20s. They're young men and women from across the nation, and many of our shipbuilders are young and know the stories very well," she said. "To be able to interact and be among these living legends is just unmatched. I don't think I've had a highlight like this in my 35-year career."

"That says a lot," LaNier said amid the preparations. "That does say there are people who are very understanding of our history, what we have given to our country not knowing that is what we were doing at the time. We represent quite a bit of progress, as far as I'm concerned."

The Little Rock Nine's mark on history is important to Holden. As work will continue on preparing the submarine, he hopes others appreciate the group's impact when they hear about the submarine's connection to the state and its history.

"Everything that comes behind this is made because of what these nine young men and women have done for us and the state of Arkansas," he said.

Brian Jackson and Billy Williams stood with Holden as the Little Rock Nine talked with reporters. Jackson -- like Holden -- grew up in Helena, while Williams was raised in Newport. Jackson and Williams are also Black men.

As the Little Rock Nine wrapped up their interviews for media day, LaNier walked over to the men and introduced herself. They shared a warm exchange before LaNier walked away with her classmates.

"To me, they're rock stars," Jackson said. 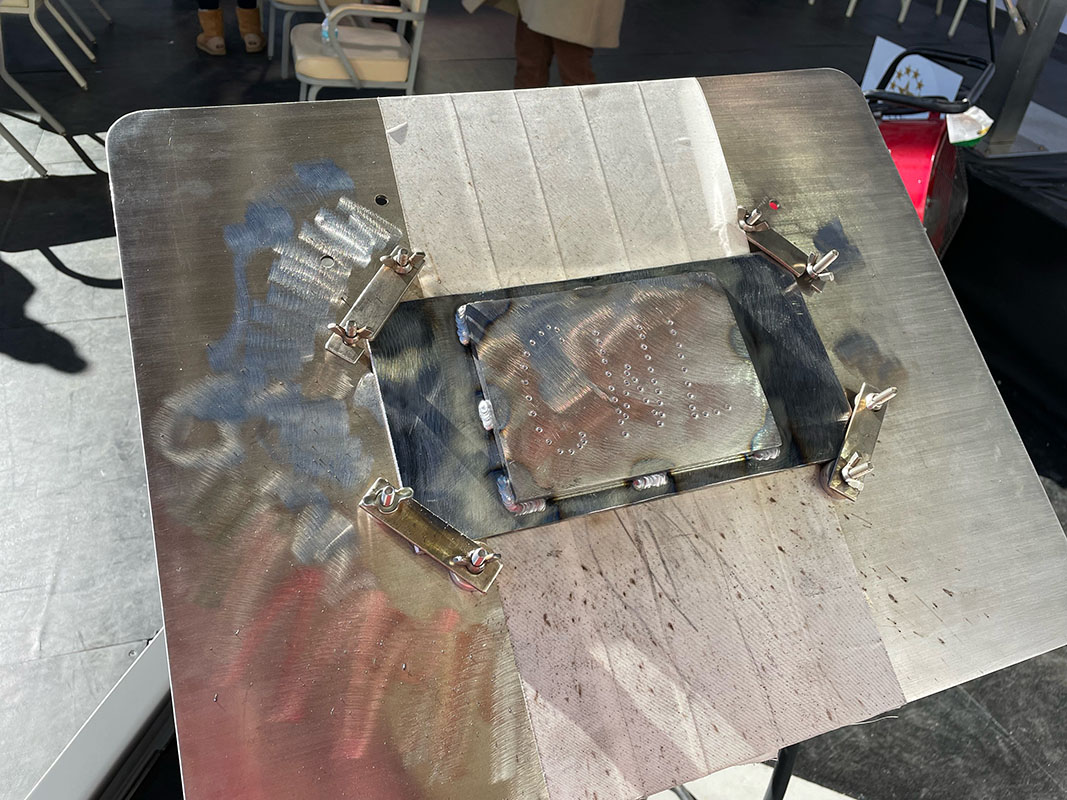 A metal plate with Carlotta Walls LaNier’s initials awaits welding onto the nuclear submarine USS Arkansas in a ceremony today at the Newport News, Va., shipyard. The event will recognize members of the Little Rock Nine and its female members will be honored as sponsors of the submarine with a metal plate for each added to the submarine’s hull. (Arkansas Democrat-Gazette/Alex Thomas) 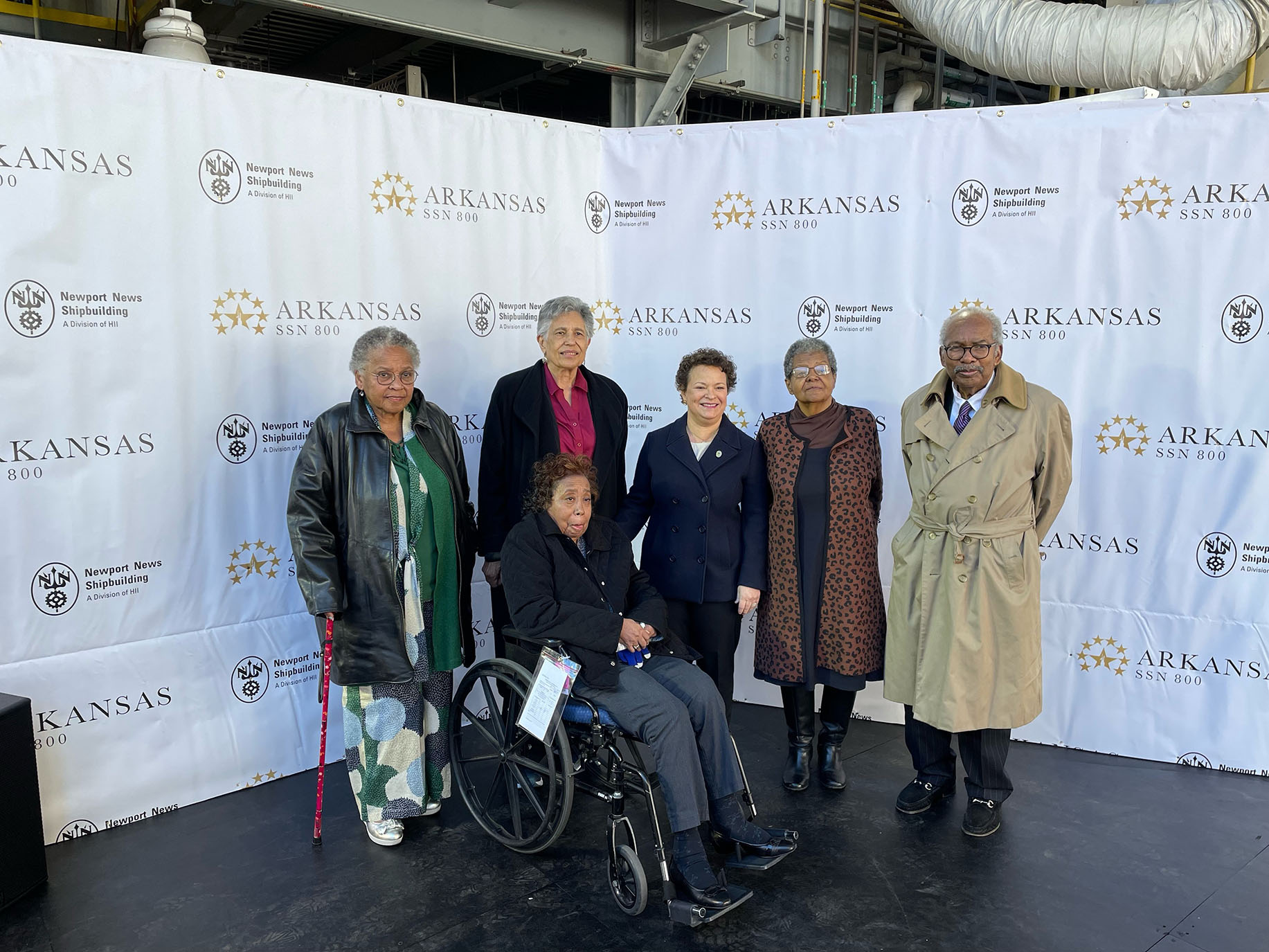