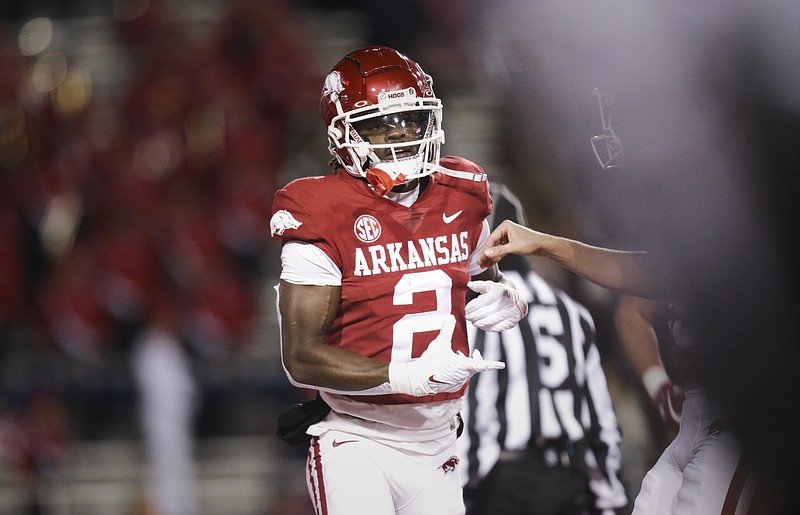 Razorback fans, however, managed to relish every moment of their team’s win in Fayetteville on Saturday night over Ole Miss.

The final score was 42-27, though it really wasn’t that close. Arkansas led 42-6 at one point. KJ Jefferson was back, throwing touchdown passes on three consecutive possessions in the first half. Meanwhile, Raheim Sanders had 232 rushing yards and three touchdowns.

At 6-5 overall and 3-4 in Southeastern Conference play, Arkansas is bowl eligible. A win over Missouri on Friday afternoon might just put the Hogs in the Liberty Bowl, which is like another home game for Arkansas.

Ole Miss fell to 8-3 overall and 4-3 in the SEC with the Egg Bowl on tap for Thanksgiving night.

It was the fifth consecutive time for an Arkansas team to beat an Ole Miss team in Fayetteville. Ole Miss’ 703 yards of offense — much of which came after the outcome was no longer in doubt — was the most ever allowed in an Arkansas win.

Jefferson is now 15-7 as a starter the past two seasons. He finished the game 17 of 22 passing for 168 yards. The 35 points Arkansas scored in the first half were the most for a Razorback team in the first half of an SEC game since 2016.

We were 2-2 on the picks last week, making the record 73-22 for the season. Here are the picks for this week’s games involving Arkansas teams:

Arkansas 37, Missouri 28 — Missouri — which has had good luck against the Hogs in Columbia through the years — comes into the contest with a 5-6 record. The Tigers are 2-5 in conference play. The five wins were over Louisiana Tech, Abilene Christian, Vanderbilt, South Carolina and New Mexico State. The six losses were to Kansas State, Auburn, Georgia, Florida, Kentucky and Tennessee.

Alabama State 42, UAPB 19 — A long season for the Golden Lions, who have failed to win a SWAC game this year, comes to an end Thursday in the Turkey Day Classic at Montgomery, Ala. Alabama State is the host school. It has a 6-4 record with wins over Howard, Miles, Texas Southern, Mississippi Valley State, Alabama A&M and Bethune-Cookman. The losses were to UCLA, Prairie View A&M, Jackson State and Florida A&M.

Troy 30, Arkansas State 20 — It has also been a long season for the Red Wolves, who fell to 3-8 overall and 1-6 in Sun Belt Conference play last Saturday with a 16-13 loss at Texas State. The home team kicked the 29-yard winning field goal with two seconds remaining. ASU had tied the score with a field goal just 29 seconds earlier, but Texas State quarterback Layne Hatcher out of Pulaski Academy in Little Rock hit a couple of 21-yard passes to go along with a roughing-the-passer penalty. Troy rolls into Jonesboro on Saturday with a 9-2 record. The only losses were to Ole Miss and Appalachian State. The wins have come against Alabama A&M, Marshall, Western Kentucky, Southern Mississippi, Texas State, South Alabama, Louisiana-Lafayette, Army and Louisiana-Monroe.