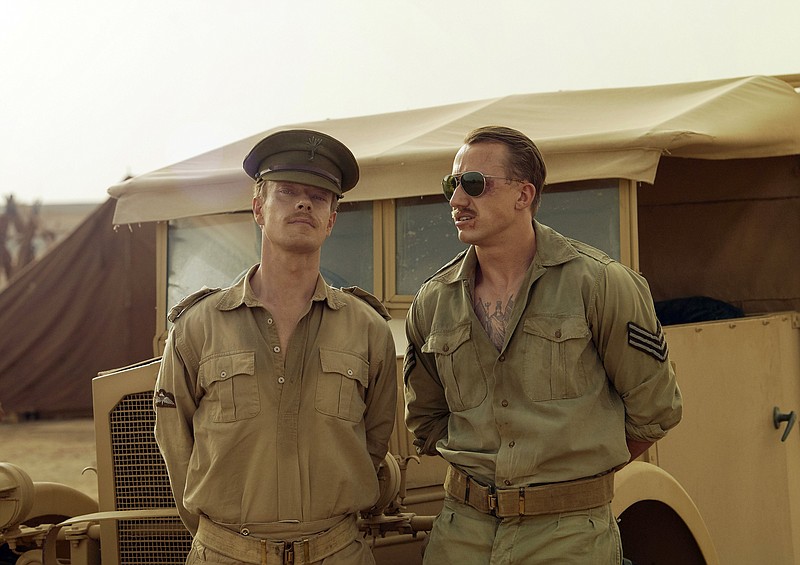 Alfie Allen (left) and Theo Barklem-Biggs star in “Rogue Heroes,” a series about the origin of Britain’s elite Special Air Service. It premiered Nov. 13 on Epix. (Epix via AP)

NEW YORK — Think of a military unit and you'll likely get an image of fresh-pressed uniforms, crisp saluting and a strong sense of hierarchy. But a new TV series offers a much messier alternative — one that can be even more effective.

"Rogue Heroes," streaming this month on Epix, examines the origin of Britain's elite Special Air Service, a unit created in 1941 by a group of misfits who bucked the pomp and red tape of the traditional army and yet had a large part in beating the Nazis.

"All of these people who were in this regiment would not survive or thrive in peace. They were destined for jail and destruction," said Steven Knight, series creator and writer. "They were built for war. And then when war comes along, suddenly you need these people."

It's a thrilling, shoot'em-up series shot in North Africa and it's awash in testosterone, with plenty of whiskey drunk from the bottle, undulating sand dunes, machine guns, sunglasses, sweat stains and whirling ceiling fans.

Knight, who created "Peaky Blinders," leans into that same successful blueprint by featuring a gang of non-conformists, lavish set designs and lots of cool music unrelated to the time.

The actors are as liable to quote "Ode to a Nightingale" by John Keats as plunge a knife into an enemy soldier. They are shown stealing food rations from Australian troops, using hashish as a bribe and getting into barroom brawls. "Submit to the macho tempo and it is terrific," says the Guardian newspaper.

The SAS thought outside the box, hurting the Nazi march across North Africa by attacking supply chains from the desert instead of the expected coast, destroying planes, aviation fuel and trucks on the ground in secretive commando raids. Their motto was: "Who dares wins."

"No one gave the order for them to come into being. It was largely three young men in their early 20s who decided to change the way that war was fought," Knight said.

Filming the series was more harrowing than most, with actors filming in the summer in eastern Morocco, often wearing jackets in the hottest months of the year to replicate winter when much of the story is set.

"All the locals there were just like, 'You guys are off your rocker,'" says Allen, one of the breakout stars of "Game of Thrones," who plays one of the SAS' founders. "It's definitely a testing environment to work in. Some of the camera equipment just couldn't handle the heat."

Adding to the allure is a soundscape that's pure adrenaline, with jeeps racing across dessert dunes to songs by AC/DC, Motorhead and Black Sabbath. Viewers will also hear "I Fought the Law" by The Clash, "Slow Ride" by Foghat and "Smash It Up" by The Damned.

"When you've got a desert that is that vast, you need music that's going to fill that space," Knight says. "People who make heavy metal and punk are very similar to the sensibility of the people who formed the SAS."

Allen applauds the addition of modern songs. As with his character, he's not tied to tradition. "I'm all for that. I just kind of grew up thinking, why can't we kind of break that rule and add modern music to period pieces?" he asks. "If there's an opportunity to do it, definitely do it."

The SAS was a rarity for the British military by mixing soldiers who were from the land-owning aristocracy with working-class men, empowering everyone to challenge orders regardless of class.

"Because the crisis was so great and the need was so urgent, all of that nonsense was forgotten," Knight says. "People of like minds, people who sort of were not afraid of death and who did think outside the box, gravitated together."

Personal reasons brought Knight to the project. His father fought in North Africa during World War II as part of the British Eighth Army. "He'd obviously been through hell and he would never talk about it. So as a kid, I often wondered what was it like for him?" When Knight read the book, he imagined he could honor his dad: "I just thought, 'I've got to do this."

While a group of rogue soldiers conducting hit-or-miss raids on Nazi convoys decades ago might not naturally prompt lessons for today, Knight thinks the way the SAS made decisions could teach today's corporations.

"The decision-making process has to be a small thing, because when it's so vast, it becomes quite vague, and it's very blunt and it doesn't hit the target," he says. Another lesson: "You have to listen to people who are putting forward a different proposition because they might just be right."