Brexiteers vexed by reports of a Swiss-style relationship by Alex Morales Bloomberg | November 22, 2022 at 4:00 a.m. 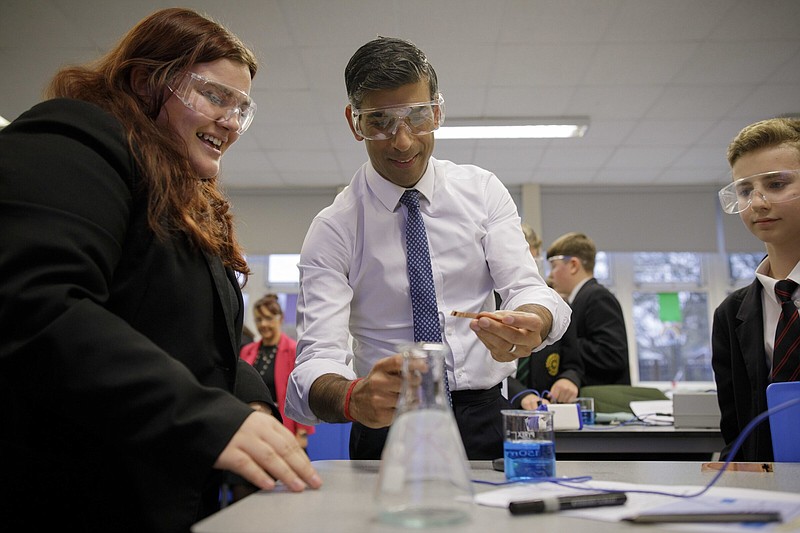 Prime Minister Rishi Sunak came under pressure on Monday to ease economic tensions with the European Union and let more skilled workers into the U.K. to address the country's economic problems.

Tony Danker, director-general of the Confederation of British Industry, urged Sunak to settle a dispute with the EU over trade between Great Britain and Northern Ireland in order to unlock more opportunities for trade and to ease immigration restrictions which are adding to the cost-of-living crisis.

"We've got an immigration system that's far too nervous about bringing in the skills we need," Danker said in an interview with Bloomberg Television's Lizzy Burden, arguing that the shortage of workers is adding to the "stagflation" pressures in the U.K. economy.

Danker was due to appear alongside Sunak at the CBI's annual conference in Birmingham on Monday morning as the prime minister's team seeks to head off a fresh dispute over the U.K.'s approach to trade with the EU This comes after No. 10 Downing St. denied a report in the Sunday Times that the U.K. is considering pushing for a Swiss-style relationship with the EU, an idea that had angered Brexit hard-liners.

Former cabinet minister Simon Clarke said on Twitter that he hoped that wasn't under consideration, and former U.K. Independence Party Leader Nigel Farage said "this level of betrayal will never be forgiven."

Danker said that the government should avoid opening up the broader debate over Brexit and focus on potential benefits from the existing deal, such as partnerships in science and mutual recognition of professional qualifications. Those initiatives are being held up by the dispute over Northern Ireland.

"Forget about the Swiss deal," Danker said. "We just want the Boris Johnson Brexit deal to be implemented and that's not happening right now because of the Northern Ireland Protocol."

Switzerland is a member of the European Free Trade Association, which, thanks to about 120 bilateral accords, participates in the single market for most goods. But it also has to accept free movement of labor, EU market regulations and makes annual payments to the bloc's budget -- all of which are red lines to hard line Brexiteers on the right of Sunak's Conservative Party.

The pushback shows the bind Sunak is in as he and Jeremy Hunt, the Chancellor of the Exchequer, seek to boost the U.K.'s economy, which Hunt said last week is already in a recession that's predicted to last through 2023. Hunt on Thursday unveiled a $65 billion package of tax rises and spending cuts as he sought to restore the confidence of markets in the economy two months after former Prime Minister Liz Truss's disastrous plan for $53 billion of unfunded tax cuts.

The government's fiscal watchdog, the Office for Budget Responsibility, estimates Brexit will lower Britain's trade intensity by 15% over the longer term, despite the promises of those who campaigned for the divorce that it would allow the country to become a more agile trading nation.

Instead, British businesses trading with Europe have faced extra red tape. Meanwhile the U.K. is still in a standoff with the bloc over trading arrangements between Northern Ireland -- which still follows EU rules -- and Great Britain. While a Swiss-style deal would ease those tensions, the U.K. government issued a statement on Sunday calling the Times report "categorically untrue."

Nevertheless, there are signs Sunak's administration is trying to repair the fractious relationship with the EU that prevailed under Johnson, who negotiated the Brexit deal, and his short-lived successor Truss, who promoted legislation to unilaterally break with the so-called Northern Ireland Protocol governing the region's trade.

"Having unfettered trade with our neighbors and countries all over the world is very beneficial to growth," Hunt told BBC Radio on Friday, adding that in the years ahead, the U.K. will be "able to remove the vast majority of the trade barriers that exist between us and the EU" while remaining outside the Single Market.

Information for this article was contributed by Joe Mayes of Bloomberg.