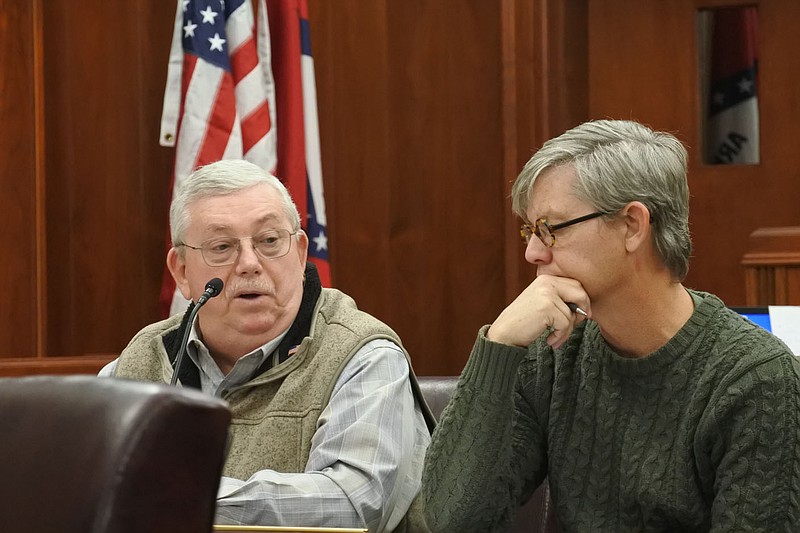 VAN BUREN – A town will be able to keep $2.5 million for another three months in its effort to provide about 625 households in north-central Crawford County potable water service.

The Quorum Court extended the deadline for Mountainburg to fully fund a proposed water infrastructure project from Nov. 30 to Feb. 28 at its meeting Monday. This came after the county's American Rescue Plan Committee voted to push the deadline back that same evening.

The Quorum Court approved spending $2.5 million in federal American Rescue Plan money for the water project March 21. However, it stipulated the money would remain in the county's American Rescue Plan fund and be redistributed if the project isn't fully funded by Nov. 30.

Mountainburg Mayor Susan Wilson said Monday the water project would've been over if the county revoked the $2.5 million. Mountainburg applied for additional money for the project through the state and U.S. Department of Agriculture Rural Development, which aren't due to make a decision until December and after the beginning of 2023, respectively.

Wilson said the ordinance the Quorum Court approved would be submitted to the state and Department of Agriculture as part of Mountainburg's application material.

No water system serves households in a certain part of Crawford County -- between Mountainburg and Cedarville -- from the Washington County line south to Rudy, according to Wilson. Residents who need or want water have to either get it from wells or an outside source, such as the Lake Fort Smith Water Treatment Plant in Mountainburg. Mountainburg buys water from Fort Smith.

Wes LeMonier of Hawkins-Weir has said the project proposed to furnish these people with water entails adding 68 miles of pipe from Mountainburg's water distribution system to households in the affected area, in addition to building infrastructure such as water storage tanks, pressure-reducing valves and a new pump station. The project would also improve three existing pump stations.

LeMonier estimated construction would take two years to complete. The entire project is set to cost about $13.4 million.

Wilson said Monday she, Hawkins-Weir, current County Judge Dennis Gilstrap and incoming County Judge Chris Keith also met with the Western Arkansas Planning and Development District officials Nov. 9 to discuss the county applying for an additional $1 million in Community Development Block Grant money through the Arkansas Economic Development Commission on Mountainburg's behalf. She said this application couldn't happen until after the beginning of 2023.

LeMonier has said the money would cover adding low-to-moderate income residents to the planned water system and bringing their plumbing up to state standards. Any leftover money would go to project costs.

The Quorum Court also approved on Monday spending $936,417 in American Rescue Plan money for premium pay for full-time and part-time employees who worked for the county between May 1 and Nov. 30 and have continued their employment through Nov. 30.

Employees will be eligible to receive premium pay if they worked on-site for the county during that time, according to the ordinance.

Eligible Crawford County employees who were employed during the following periods will receive the corresponding amounts of premium pay before applicable payroll deductions:

Both full-time and part-time employees who were only employed from Oct. 1 through Nov. 30 will not receive premium pay.