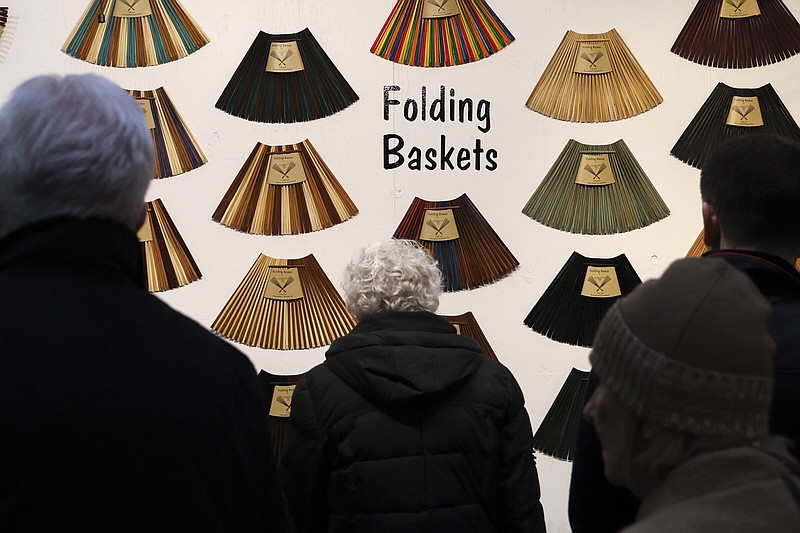 People shop for baskets made out of chopsticks in Bryant Park’s Winter Village in New York earlier this month. (AP/Julia Nikhinson)

NEW YORK -- On a recent evening in early November, shoppers at the Bryant Park holiday market in New York City were in the holiday spirit well before Black Friday. The scent of pine wafted from candle sellers' booths, people snapped up gingerbread cookies and hot apple cider and ice skaters swirled figure eights around the rink in the center of the market.

After two years of pandemic holidays when people spent more dollars online, shoppers are back in force at stores and holiday markets. Small businesses say it is beginning to feel a lot like Christmas, both emotionally and financially.

"It's definitely been busier than last year," said Sallie Austin Gonzales, chief executive officer of soap company SallyeAnder based in Beacon, N.Y. This is her second year at the Bryant Park market -- officially called the Holiday Shops by Urbanspace at Bank of America Winter Village at Bryant Park.

"People are taking advantage of being a part of society again and walking around," she said

Christmas markets have been popular in Germany and Austria, where they're called Christkindlmarkets, and other parts of Europe for centuries. They've become more popular in the U.S. over the past few decades, springing up in Chicago, Atlanta, San Francisco, and many other cities. In New York, the Grand Central holiday market and the Union Square holiday market started in 1993.

Urbanspace now operates three holiday markets in New York: Bryant Park, Union Square and Columbus Circle. The pandemic put a damper on festivities in 2020, when only a scaled-back Bryant Park opened. Last year, Bryant Park was open at full capacity, but Union Square was at 80% capacity and Columbus Circle at 50%. This year, not only are all three markets at full capacity, Urbanspace is adding another one in Brooklyn that opens Nov. 28. Vendors apply for pop-up spaces and pay weekly or monthly rent to Urbanspace.

"We've received more applications than ever before, that tells us vendors are excited to be back in the pop-up game," said Evan Shelton, Director of Pop-Up Markets at Urbanspace. "I'm very optimistic."

So far, foot traffic is up slightly from last year as tourism continues to improve, Shelton said. While the number of tourists remains below 2019 levels, the tourism trade group NYC & Company expects 56.4 million domestic and international visitors by the end of 2022, up 30% from a year ago. That bodes well for small businesses as the Christmas shopping season can account for 20% of annual sales.

For SallyeAnder's Gonzales, the Bryant Park market is a way to meet new customers and see what resonates with them. So far this year, her lemongrass and charcoal detoxifying soap and a tub of natural insect repellent are popular items. Like most businesses, she's facing higher costs for everything from olive oil to paper bags. To accommodate, she's raised the price of her soaps from $8 to $9.25.

"Holiday shops do a great job for us," she said. "We see thousands and thousands of customers, and get tons of new advice, ideas, suggestions and testimonials."

For some small businesses, the markets are a welcome respite after a punishing couple of years. Elizabeth Ryan, who owns and operates Breezy Hill Orchard in Staatsburg, N.Y., said the initial onset of covid-19 caused her revenue to plunge 80% in 2020.

Ryan is a founding member of the Union Square Greenmarket and a longtime staple at the Manhattan holiday markets, where she sells cider, cider doughnuts and gingerbread cookies. She said her orchard has mainly recovered, with the help of a good apple crop this year. But holiday markets give her a much-needed revenue boost.

"We love working for the holiday markets, it has helped us a lot to get through various and sundry problems," she said.

Preparing for holiday markets is labor intensive, because many small businesses have to schlep their goods from miles away and spend long hours staffing their booths. Ryan's farm is 100 miles north of the city and she drives in almost every day. But being at the market and watching New York City recover from the pandemic are worth the hassle.

"Reopening of the shops and the return of Christmas last year was very exuberant and joyful. I hope this year is the same," she said.

While holiday market-goers might be feeling the pinch of 40-year high inflation rates, Lisa Devo, owner of Soap & Paper Factory, a Nyack, N.Y.-based maker of candles and other scented products, said shoppers are still looking for an affordable treat or gift. Devo, who has had a booth at Bryant Park for about seven years, has six or seven products under $25 and not many items over $50. She's had to raise some prices, for example, candles that were $28 now retail for $32.

Shoppers return yearly for her "Roland Pine" line of products including candles and diffusers, which has a piney scent that wafts out of her booth. Devo calls the scent "the star of our company."

Most of Soap & Paper Factory's revenue comes from wholesale orders, but selling items at markets for retail prices provides a boost. "We're hoping for a great year -- we compare our numbers every year and we're off to a great start."

She said the crowds seem more robust than last year, though it still doesn't feel quite back to pre-pandemic levels of "normal." She senses the fear of covid-19 has subsided and is happy to see fewer masks.