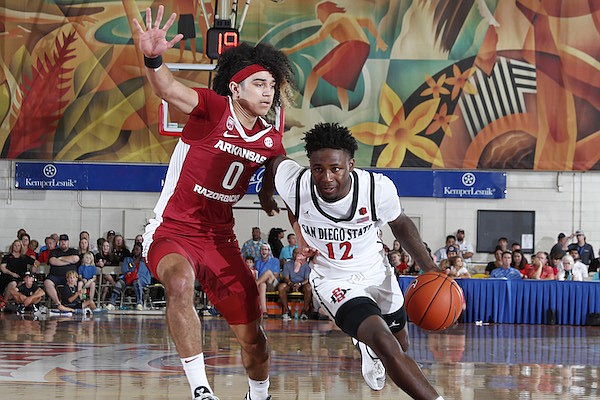 Senior forward Kamani Johnson was an unlikely hero for the University of Arkansas basketball team on Wednesday night in the Maui Invitational's third-place game.

Johnson, who didn't play in the Razorbacks' first two games in the tournament or in the first half against San Diego State, made clutch plays at the end of regulation and overtime to help No. 9 Arkansas rally to beat the No. 17 Aztecs 78-74 in Lahaina, Hawaii.

Johnson sent the game to overtime when he scored on a rebound and putback of a missed driving attempt by Anthony Black at the regulation buzzer to tie it 67-67.

In overtime, Johnson scored on a rebound to give Arkansas a 75-72 lead, then got a defensive rebound, was fouled and hit two free throws with three seconds left to make it 78-74.

To top it off, Johnson stole the Aztecs' inbound pass.

Johnson finished with 7 points, 7 rebounds and 2 steals in 20 minutes.

"Coach [Eric Musselman] has told me I'm one of the best offensive rebounders in the nation," Johnson said of his basket at the end of regulation. "So I told the guys, 'Whatever you do just make sure there's a little bit of time before you shoot so I can get an offensive rebound.'

"[Black] attacked the basket and they didn't put a body on me."

The Razorbacks continued to play without freshman guard Nick Smith, a preseason first team All-SEC pick by the media and coaches who continues to sit out as he recovers from a right knee injury.

Smith, projected as a top five NBA Draft pick, has missed all six games this season.

The Aztecs led 45-34 with 14:27 left after a basket by Bradley before Arkansas mounted a comeback Johnson helped fuel.

"I feel amazing," Johnson said. "I feel like our team was a little bit down from yesterday [after losing to Creighton 90-87]. We felt like we should have won the game.

"We got down [against San Diego State] and Coach put me in and I was ready for the moment. I feel like I'm one of the leaders on this team, so I had to show them how to fight.

"It was just a team effort out there. I love how we fought.

"That's just going to help us in March. That's one of those gut wins."

Junior guard Davonte Davis hit a jump shot with 23 seconds left in the first half to pull Arkansas within 35-26 at halftime after the Razorbacks had trailed by as many as 13 points.

Black was called for his second foul at the 10:01 mark and went to the bench.

Without Black in the game, San Diego State went on an 8-0 run, including four points by Jaedon Ledee, to move ahead 26-16.

The Razorbacks went 0 of 5 from the field and had two turnovers with Black on the bench before Musselman put him back into the game with 6:33 left.

Butler's driving basket pushed San Diego State's lead to 29-16 with 5:56 left in the half.

Black then hit two free throws at the 5:44 mark -- Arkansas' first points in a 4:28 span that featured seven missed shots -- to pull the Razorbacks within 29-18.

The Razorbacks got two free throws from Mahki Mitchell and a driving basket by Black to make it 29-22.