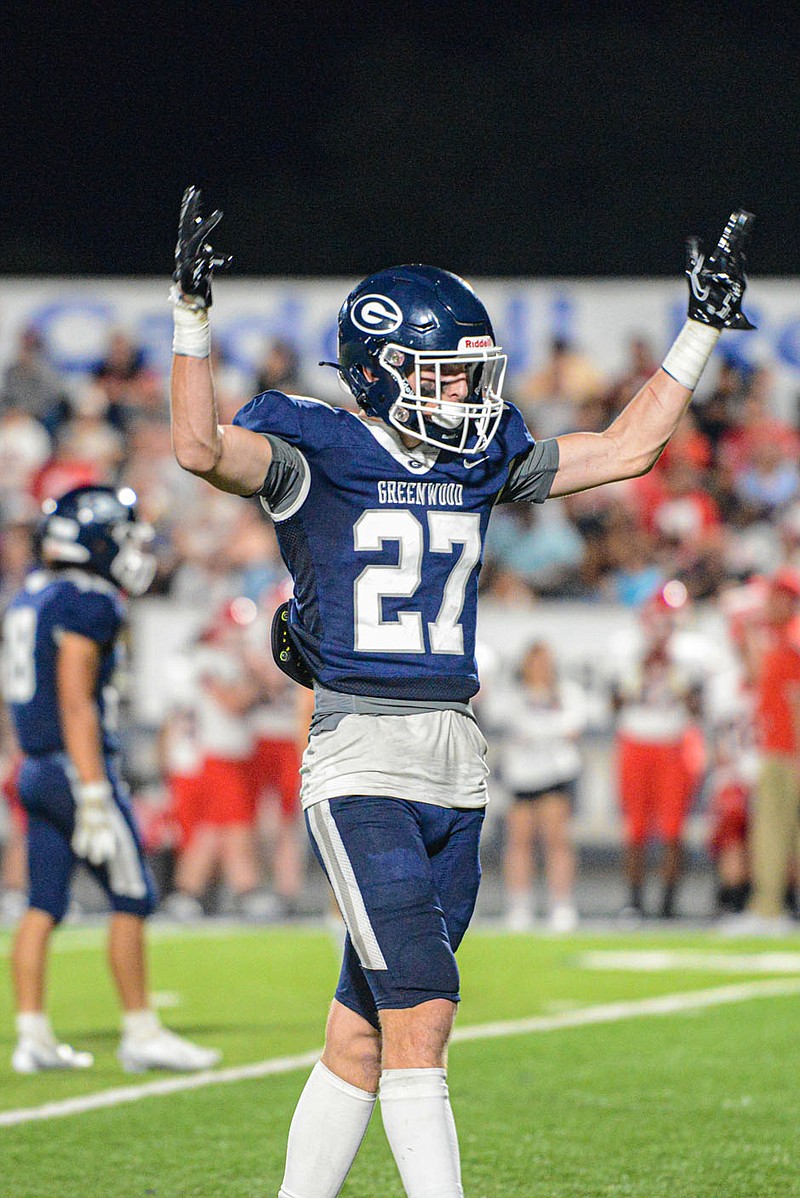 Landon Nelms (27), junior defensive back for Greenwood, reacts on Friday, Sept. 2, 2022, during the second quarter of the Bulldogs' 56-53 win over Fort Smith Northside at Smith-Robinson Stadium in Greenwood. Nelms and the Bulldogs will host Benton on Friday in a Class 6A state semifinal game. (NWA Democrat-Gazette/Hank Layton)

GREENWOOD -- Greenwood and Benton are familiar foes, but the Bulldogs are not expecting the same old Panthers on Friday.

"They're different," Greenwood coach Chris Young said. "It all starts with the running back. It's a nice move-in for those guys. They were excited the day he showed up on their campus. They do a great job on offense. We struggled the last couple of times we've faced them, they've scored some points on us."

Benton is not as pass-happy as in recent years mostly due to junior running back Braylon Russell, who moved from Hot Springs Lakeside during the summer.

"Obviously, we have yet to face him and haven't seen him in person, but if the stories are half as true as what we're told, he's really, really good," Young said. "He's kind of like James Jointer, who played at Parkview last year ... big, strong, physical back. He's 230 and runs a 4.5 40. That's really, really scary to think about."

Russell joins an impressive list of running backs that the Bulldogs have faced in the past in the playoffs, including Pulaski Academy's Broderick Green, Little Rock Christian's Michael Dyer, Marion's Darcel 'the Diesel' Johnson, Camden Fairview's DeAnthony Curtis, and Nettleton's Derek Lawson.

Last Friday night in a 42-7 win over Russellville in the second round of the playoffs, Greenwood intercepted four passes from four different passers.

It's an area cornerback coach Travis Sandifer and safeties coach Steven Thessing have work on all season.

"I think our coverage early in the year is something that we really struggled with," Young said. "Coach Sandifer and Coach Thessing have done an outstanding job with our guys. We've got several different guys playing back there."

"That's our starting two corners, and they were 0-for-7 with three picks on those guys," Young said. "We're very happy with our pass coverage."

Greenwood also brought out a trick play on a two-conversion after the Bulldogs scored their final touchdown of the night.

Grant Karnes was lined up in the left slot and went into motion to the right. Left tackle Cooper Young came off his block, retreated and took the lateral from Hunter Houston and scored for a 42-0 lead with 10:01 left in the third quarter.

"We like to do that just for fun," Young said. "Those linemen love it when you throw it to your left tackle. Only in that situation were we able to run that. We did it as a fun thing, and it turned out perfectly."

The Bearcats went about as far south as a team can go last week, almost to Louisiana, and still be in Arkansas when they traveled to Smackover for their second-round playoff game.

Now, they go to the northeast corner of the state almost to the Missouri boot heel to Osceola.

More than the trip, though, is the opponent for the Bearcats.

"They're athletic for sure and very scary," Crowley said. "They're a very good football team. We definitely haven't seen an athletic team like this. They're as athletic as anybody in 3A."

Booneville has seen its season come to an end the last two seasons after long road trips, both to Harding Academy, which went on to win the state championship both times.

The Bearcats will lean on the leadership and experience of the seniors on Friday.

Osceola opened the season with three nonconference losses but hasn't lost since and won the 3A-3 conference. The Seminoles ousted touted Camden Harmony Grove from the playoffs last week, 48-7.

Quarterback Torian Bell has thrown for 1,777 yards and 26 touchdowns.

"They're throwing all over the place," Crowley said. "I'm hoping for a really windy night on the river."

Bell is averaging 16.8 yards per completion.

"We've just got to make sure we don't give up the big play. They have big play capability."

The Warriors played the perfect half on Friday before Malvern made two necessary stops to rally to a 41-31 win.

Friday, Lamar threw an interception right before the half when they were trying to get close enough for a field goal that could have extended a 23-20 lead.

"We left three points on the board there," Lamar coach Josh Jones said. "It just slipped out of his hand. He was trying to throw it out of bounds. We've got a good kicker."

Then a fumble and two penalties were costly in the third quarter.

"They called an illegal shift," Jones said. "It's fourth and one, and they made it on their sideline. If we score every time in the second half, we win. We just didn't get it done."

Malvern was the second seed from the tough 4A-7 conference.

"We were heavy underdogs," Jones said. "They've got five Division 1 players, and one of their tackles has been offered by the Razorbacks."

That puts him third on the all-time list behind Noah Dotson and Evan Burris.

Defensive end Dillon Flanagan finished with 11 sacks, which puts him second in a season behind Ryan Wilkerson, who had 12 in 1994.

Henry finished the season with 53 catches for 798 yards and 12 touchdowns.

He set career records in receiving in all three categories with 166 receptions for 2,811 yards and 35 touchdowns.

Henry has received a Preferred Walkon Offer from the Arkansas Razorbacks.

The 1-2 punch of quarterback Landon Wright and running back Eli Masingale set high standards for the future.

Masingale ran for 1,401 yards and 23 touchdowns this season and finished his career with 3,416 yards and 48 touchdowns.

Southside junior running back Isaac Gregory led Class 7A in rushing during the regular season.

Gregory had 204 carries for 1,523 yards and 21 touchdowns and missed the regular-season final against Springdale and the playoff game against North Little Rock.

Gregory's rushing total is the most since Daniel McGee ran for 1,709 yards and 21 touchdowns in 2008.

Also against Har-Ber, quarterback Carter Zimmerman ran for 240 yards and three touchdowns, as the two became the first duo in school history to eclipse the 200-yard mark in a game since Julius Jones for 23 times for 237 yards and four scores and David Price ran 16 times for 202 yards and four touchdowns in a 56-29 win over Northside in the regular-season finale in 2010.

Junior defensive end John Parkinson finished with 13 sacks for the season. By comparison, linebacker Shannon Wright had 15 sacks during the 1988 season as the state's defensive player of the year before signing with the Arkansas Razorbacks.