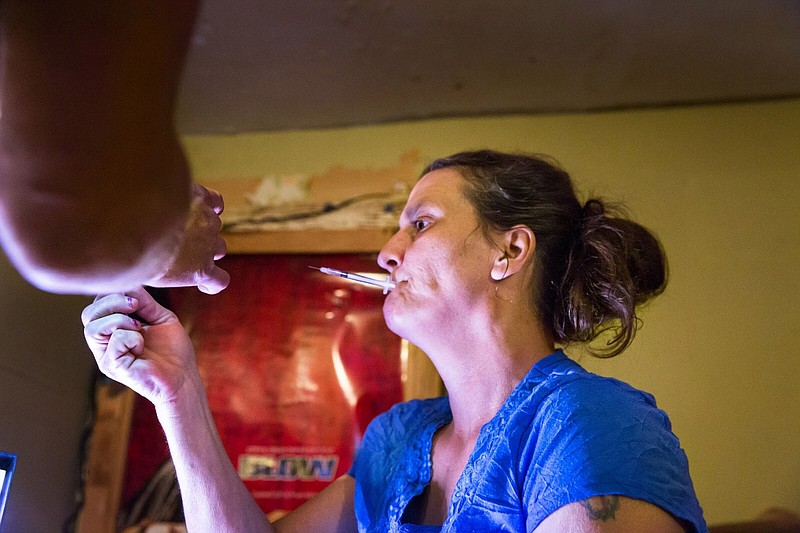 Recovering methamphetamine user Veronica Converse is one of the people profiled in Brent and Craig Renaud’s 2017 documentary “Meth Storm.”

Five years after its debut, "Meth Storm" is still a harrowing, powerful piece of filmmaking and reporting.

The HBO documentary, directed and produced by Brent and Craig Renaud of Little Rock, first aired on Nov. 27, 2017, and introduced viewers to the grim world of methamphetamine addiction in rural Arkansas, the cycle of poverty and incarceration that comes with it and the efforts of law enforcement to stifle the seemingly endless flow of potent meth from super labs in Mexico and South America.

We watch as DEA agents bash in the doors of flimsy, filthy mobile homes and arrest low-level allegeddealers in the wee hours of the morning. We see meth addict Veronica Converse and Teddy, one of her adult sons, inject the drug; another scene shows her other son -- bald, bespectacled Daniel -- tweaking and hallucinating, a wicked-looking knife in his hand, searching the woods for figures that only he can see.

And then there are the shaky moments with Teddy, fresh out of jail and visiting his young daughters and their mother, swearing things are different. It's not long after that we learn he has been arrested again.

The Renauds' cameras capture the tension of police raids and the daily frustration, stubborn defiance and little cruelties of addicts. Like most of the brothers' work, "Meth Storm," which can still be seen on HBO, is presented in a fly-on-the-wall, cinema-verite style, following the characters as their stories unfold.

By the time of the film's release, Craig and Brent were critically acclaimed documentary makers. They received an Emmy nomination for "Dope Sick Love," their 2005 film about two drug-addicted couples in New York. "Off to War: From Rural Arkansas to Iraq," won Best Limited Series in 2006 from the International Documentary Association and their eight-part 2014 Vice docuseries, "Last Chance High," about at-risk students and staff at Chicago's Moses Montefiore Academy, won a Peabody Award. In 2006 they founded the Little Rock Film Festival, which ran for nine years.

In March, shortly after Russia's invasion of Ukraine, 50-year-old Brent was shot and killed in Irpin, a suburb of Kyiv. He was there filming for a series about refugees. Among the projects Craig now has in the works is a documentary about his brother. He's also working on "Southern Storytellers," a national series for PBS and Arkansas PBS.

The idea for "Meth Storm" came in 2015 after Craig had a conversation with a Little Rock police officer about the methamphetamine problem in Arkansas.

In his research, Craig attended hearings at the Van Buren County Courthouse in Clinton, where he saw firsthand "just how many people were coming in and out of the courtroom with meth-specific charges."

The project at first was going to focus on addicts and their families, he says, but that expanded after he and Brent learned of the law enforcement push to stem the tide of meth coming into Arkansas. After laws were passed restricting how pseudoephedrine was sold in the state, homemade meth was replaced by product smuggled in from Mexico and South America.

"We spent a couple of months talking with the DEA and the task force about allowing us to have access with them," says Craig, who is based in Austin, Texas. "Early on, the agents on the ground are seeing if they can trust you. It took a while for them to warm up, but once they did we got some really special stuff with them and that helped make the film feel bigger in terms of the impact of what was going on and just how big the problem was."

It probably helped that the Renauds had experience filming stories on the Mexican-U.S. border for The New York Times, Craig says.

The filmmakers also had to gain the trust of Veronica, who Craig first saw on his visit to the courthouse.

"It was just going up and spending a lot of time with her and her family and slowly getting her sons to trust me as well," Craig, 48, says. "It was many, many months before even introducing a camera ... we did not want to make caricatures out of people who are addicts. These are people who have put up with really hard lives."

(He's still in touch with Veronica, who declined to be interviewed for this story).

Jonny Sowell, who at the time of "Meth Storm" was commander of the 20th Judicial District Drug Task Force, is one of the film's main characters on the law enforcement side.

"I got to be friends with Craig and Brent," he says, adding that having a film crew around took some getting used to. "I never wanted to be a public speaker or anything like that and it was really hard at first, but they made it easy. You just kind of get to where you don't notice you're being filmed."

Sowell, who is from Shirley in Van Buren County, exudes a Zen-like serenity amid the yelling and chaos as agents are shown loudly descending on houses to serve warrants. Still, even he was surprised by some of the images in the movie.

"It's the best depiction I've seen of people hooked on drugs and their lifestyle," says Sowell, who now leads the Central Arkansas Drug Task Force in Searcy. "It's a real eye-opening experience. We see a lot of things after the fact when we search a house, but unless you're with them every day you don't see how they're living."

Craig said he got calls from Arkansas judges who were shocked at what the film showed.

"Unless you take a camera and embed with the families and the dealers and the users, it's really hard to fathom what that lifestyle is like," he says.

The Renauds and their crew filmed at Renewal Ranch, a faith-based recovery facility for men on 116 acres near Conway that was featured briefly in the film. James Loy, a recovering drug addict and alcoholic, is the ranch's executive director.

"We had a wonderful experience with Craig and his team," Loy says. "I think the focus on the documentary was more on the dark side of meth addiction and the meth issue that was going on at that time and that is still going on today."

"Meth Storm" shows just how pervasive meth use had become in that part of the state, where jobs can be scarce.

"At the onset, Brent and I said, let's don't do 'Dope Sick Love' in rural America," Craig says. "I think what was so different is that the people we followed in New York City are on the fringes of society ... in 'Meth Storm' [drug use] was in every fabric of the community. It impacts everybody ... they can't get away from it."

Standing next to a shirtless suspect who has just been arrested after a raid, Sowell observes that he went to high school with the young man's father. In another scene, he talks with a man he'd arrested on drug charges in the past who was now sober and coaching Sowell's son in baseball. Driving down a rural road, Veronica points out home after home of addicts and dealers.

"The hardest thing was the amount of kids that got taken away by social services when [police] raided those places. That was really sad. It rips your heart out."

The market for methamphetamine didn't go anywhere after "Meth Storm." More than 510 people died of meth overdoses in Arkansas in 2020, according to the National Center for Health Statistics, a number that was heightened nationally because of the pandemic. (In 2019 there were 363 meth overdose deaths in the state). Fentanyl has joined meth as a deadly problem.

"We're starting to see counterfeit fentanyl pills and it's killing people," Sowell says. "The cartels are flooding the market with it and with meth. When [enforcement was] tight on the border, around '20-'21, we saw a decrease in meth in Arkansas for the first time in my 30 years of working. It was harder to find ... now it's just flooding the market."

In the five years since the release of "Meth Storm," Loy says, the number of people seeking treatment for addiction to opioids and fentanyl at Renewal Ranch has risen.

"There's still a large percentage of men that we deal with who struggle with meth addiction, but over the last five years, I'd say the opioid crisis and now fentanyl have overtaken that as the number one issue."

There are no happy endings in "Meth Storm." People keep using and selling drugs and the police keep arresting them. As bleak as it may seem, though, there is an empathy that runs through the film. The world we are shown is our world and these are people we know.

"I think the impact of films like this is taking the camera and dropping people into places and situations that they wouldn't be able to experience otherwise," Craig says. "That's the power of documentaries. You go in and you put a human face to a story and you start to care about these people. That was our hope, that you see everybody as human beings."