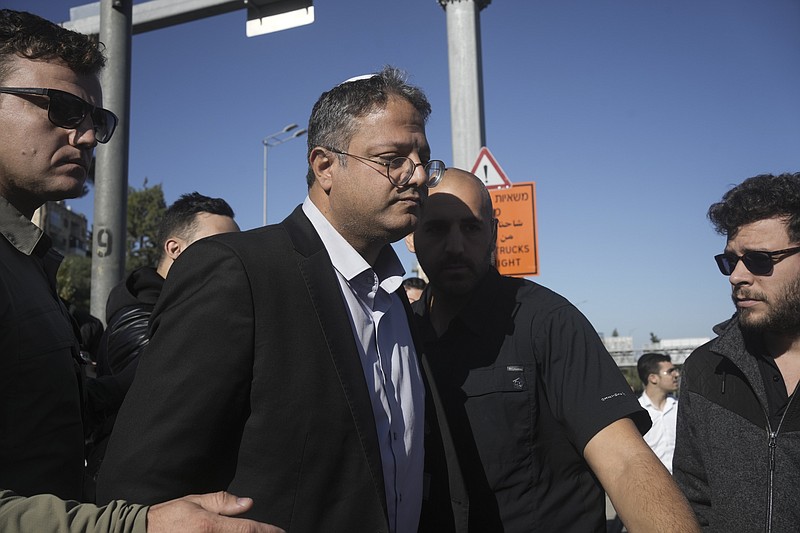 Israeli far-right lawmaker Itamar Ben-Gvir arrives at the scene of an explosion at a bus stop in Jerusalem, Wednesday, Nov. 23, 2022. Two blasts went off near bus stops in Jerusalem on Wednesday, injuring a dozen of people in what police said were suspected attacks by Palestinians. (AP Photo/Maya Alleruzzo)

JERUSALEM -- Itamar Ben-Gvir, a politician who has a long record of anti-Arab rhetoric, will become Israel's next minister of national security, according to a coalition deal struck by former Prime Minister Benjamin Netanyahu's Likud party.

Negotiations with three other potential far-right and ultra-Orthodox coalition partners are continuing. If successful, Netanyahu would return to the prime minister's office and preside over the most right-wing and religious government in Israel's history.

Awarding the sensitive role to Ben-Gvir raises concerns of a further escalation in Israeli-Palestinian tensions.

Ben-Gvir and his Jewish Power party hope to grant immunity to Israeli soldiers who shoot at Palestinians, deport rival lawmakers and impose the death penalty on Palestinians convicted of attacks on Jews.

Ben-Gvir is the disciple of the rabbi Meir Kahane, who was banned from parliament and whose Kach party was branded a terrorist group by the United States before he was assassinated in New York in 1990.

Ahead of Israel's Nov. 1 election, Ben-Gvir grabbed headlines for his anti-Palestinian speeches and stunts, including brandishing a pistol and encouraging police to open fire on Palestinian stone-throwers in a tense Jerusalem neighborhood.

Before becoming a lawyer and entering politics, he was convicted of offenses that include inciting racism and supporting a terrorist organization.

In his new role, he would be in charge of the police, among other things, enabling him to implement some of the hardline policies against the Palestinians he has advocated for years.

As head of the ministry, Ben-Gvir would oversee the police and the paramilitary border police which operate alongside Israeli soldiers in Palestinian population centers.

Likud lawmaker Yaron Levin praised the agreement, which was signed Thursday, as "the first agreement on the way to establishing a stable right-wing government led by Benjamin Netanyahu."

Ben-Gvir first entered parliament in 2021, after his Jewish Power party merged with the Religious Zionism party. Ben-Gvir's closest political ally, Religious Zionism leader Bezalel Smotrich, is conducting separate negotiations with Likud, which emerged as the largest party in the elections.

Netanyahu has balked at some of the demands, such as Smotrich seeking the defense ministry.

Talks currently focus on the terms under which Smotrich would become finance minister.