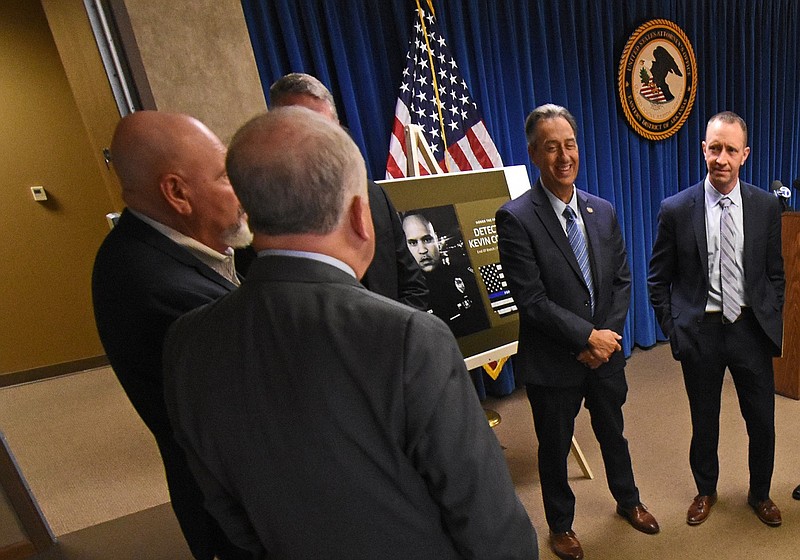 A photo of the late Pine Bluff Detective Kevin Collins (center) is visible in the center of the room at the U.S. attorney’s office in Little Rock in this Nov. 9, 2022 file photo. Representatives from law enforcement agencies across the state were talking before a news conference to announce the indictments of 80 people in central Arkansas. The officials said the indictments were the culmination of investigative work done by Collins, who was shot to death on Oct. 5, 2020. (Arkansas Democrat-Gazette/Staci Vandagriff)

Pine Bluff Police Chief Denise Richardson walked into a news conference in Little Rock earlier this month not expecting to see what met her.

The meeting was to announce a multi-agency sweep that would include the indictment of as many as 80 people. Richardson said she knew slain police officer Kevin Collins would be mentioned, but as she entered the room, there was his photograph prominently displayed.

"I didn't know he was going to be honored in that way," she said. "It didn't dawn on me. But he certainly deserved it."

Richardson, who had worked closely with Collins before he was killed in action two years ago, said he had an uncanny ability to connect people, incidents and cities when he was doing his investigations.

Other Pine Bluff officers were working with DEA, the ATF and the FBI, she said, and Collins was working in Pine Bluff.

"But the work he did, the dots he was able to connect, we knew right away that this was big," Richardson said. "What he discovered was a spider web of illegal activity involving people and cities all around us."

Working with federal authorities is "intricate," Richardson said, adding that those agencies have their own way of conducting investigations.

"We had to give them assurance that we were on the level," she said, "that we were not connected to the same people we're investigating."

To that end, she said, it was important to have someone like Collins working with the other agencies.

Richardson said she would expect such savviness from an officer with 10 to 12 years of experience.

"But I wouldn't expect it from a 5-year person like him," she said of Collins. "He just had an innate sense about what needed to be done. Instead of spinning his wheels, he knew all of this was connected, and he put all of that together. And no one can take credit for that. He did that."

When Collins died and during celebrations of his life since his death, much has been said about his positive impact on the community through his outreach and work with young people. The event in Little Rock, however, appeared to put a finer point on his police skills.

"Kevin could swiftly move from nice officer, from cross-guard officer to top gun," she said. "He was multidimensional. If he didn't like someone, you never knew it. He didn't show favorites. He did the work no matter who was the boss."

She credited the arrests to the work that was started by Collins, who was shot to death Oct. 5, 2020, as he attempted to serve an arrest warrant on a member of a gang.

Richardson said she is very pleased that the investigation Collins started continued, even after this death.

Richardson credits the FBI's James Dawson, the special agent who heads up the Little Rock field office, for keeping the focus on the investigation.

"He knew what we needed and put it in place," she said.

Richardson said she sees Collins in a different light now that she is chief. The Pine Bluff Police Department, like many other departments, has had a difficult time filling positions. One option for beefing up the number of new hires is to make standards less stringent. Richardson said that, seeing how much of an impact Collins had, she is not inclined to do that.

"We shouldn't lower the standards," she said. "We don't need to get nervous and fill our ranks with people who shouldn't even be in the job. If he can do what he did, if we find someone who can do just half of that, we will be in good shape."

Because Collins was such a stand-out officer, Richardson said, he could have gone elsewhere to work, as some others in the force have.

"I knew right away he was bigger than Pine Bluff," she said. "He could have gone anywhere."

Add that to what made Collins special in Richardson's eyes.

"He was a very unique human being," she said. "I've never met anyone like him. And I never will again. He is missed."